70s Rewind: THE MAN WHO WOULD BE KING, Sean Connery, Of Course 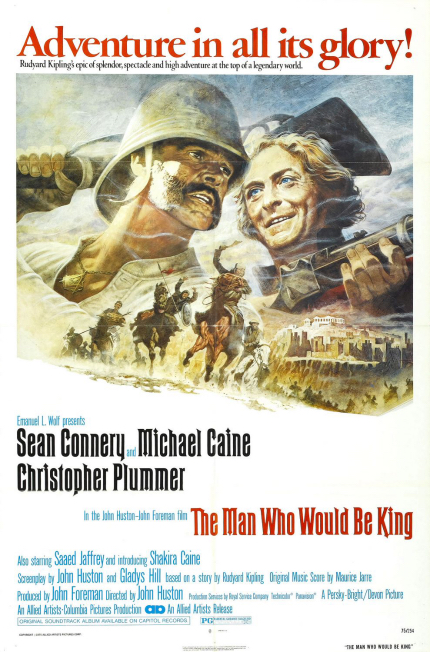 The Man Who Would Be King (1975)
Now available to rent or buy on various VOD platforms.

In the dozen years between Diamonds Are Forever (1971) and Never Say Never Again (1983), Sean Connery made 16 appearances on the big screen, redefining his persona for a new generation of movie fans, including myself.

I grew up watching Connery as James Bond on a very, very small black-and-white television screen, regularly interrupted by commercial advertising. Save for those fond memories, as well as seeing him in the daft and confusing A Fine Madness (1966), and forgetting entirely that he played a supporting role in Disney's Darby O'Gill and the Little People (1959) -- which I only recalled seeing during its theatrical re-release in 1964 because the banshee gave me nightmares -- it wasn't until watching him stand out in the ensemble cast of Sidney Lumet's Murder on the Orient Express (1974) that I began to appreciate his consummate skills as a movie star.

As a solo star, he was fearless, as in John Boorman's Zardoz, which saw him running around in a loincloth, his hairy body on nearly full display without a care in the world. (More on the film here.) Of course, in the 70s, manly body hair was the accepted fashion in the U.S., so I always thought of him as an ideal manly man -- with an accent! Naturally, I was an eager viewer in the audience for his two starring vehicles in 1975, which anointed him as a member of royalty in distinctly different fashions, as I realized when I revisited both films recently, shortly after his passing at the age of 90.

First, in John Milius' The Wind and the Lion, he portrays an Arab chief who wields absolute power over his people, kidnapping American Candice Bergen and her two children in a bid to grab a little more influence in his region of the world, which is rapidly falling victim to the expansionist desires of the West, as embodied by Brian Keith's robust performance as U.S. President Teddy Roosevelt.

The two leaders clash and bang and gradually arrive at a begrudging acceptance of each one's strout determination to exercise independence. They come to admire each other, even though they don't agree on the proper path for their people. And they never meet. Connery is firm and strong and manly in a way that I was conditioned to believe was expected of all men. Nowadays we can put such things into a better historical context, but the sexist attitudes were fully accepted as the time. The film remains a stirring piece of entertainment.

Later in the same year, Connery played a role that allowed him to evolve in his character's understanding of his place in the world, even though it was ultimately a fatal transformation. Director John Huston teamed Connery with Michael Caine to bring Rudyard Kipling's The Man Who Would Be King to magnificent life.

Contrary to my memory, Connery begins the film as a former soldier who happily continues to serve with former soldier Michael Caine, his former superior officer. They are men who are loyal to each other; Caine takes the lead, and also sparks them on a plan to go to a country where they can become kings, loot the land, and return to England as wealthy men to enjoy their retirement.

All goes well with the plan until Connery's actions one day makes the ordinary people believe he must be some sort of god. Caine convinces Connery to go along with the idea, just for expediency's sake, but slowly Connery falls in love with the idea that he really is some sort of superior being, deserving of worship. It all goes downhill from there.

While in The Wind and the Lion, Connery's character begins as a ruler and conducts himself as such throughout, he is an ordinary fellow in The Man Who Would Be King until the possibilities of godhood seduce him into some very unwise actions. Throughout both films, Connery plays his characters with absolute sincerity and persuasiveness. By that time, we in the audience could easily believe Sean Connery was a king, even when he pretended to be from the Middle East. (An Arab with a Scottish brogue? Sure!)

In classic movie-star tradition, Sean Connery often appeared to be starring as himself, or at least the audience's assumption about his charming, sometimes overbearing, yet always powerful and persuasive. If he said he was an Arab chief or the king of a foreign country, who could argue?

Do you feel this content is inappropriate or infringes upon your rights? Click here to report it, or see our DMCA policy.
John HustonMichael CaineRudyard KiplingSean Connery