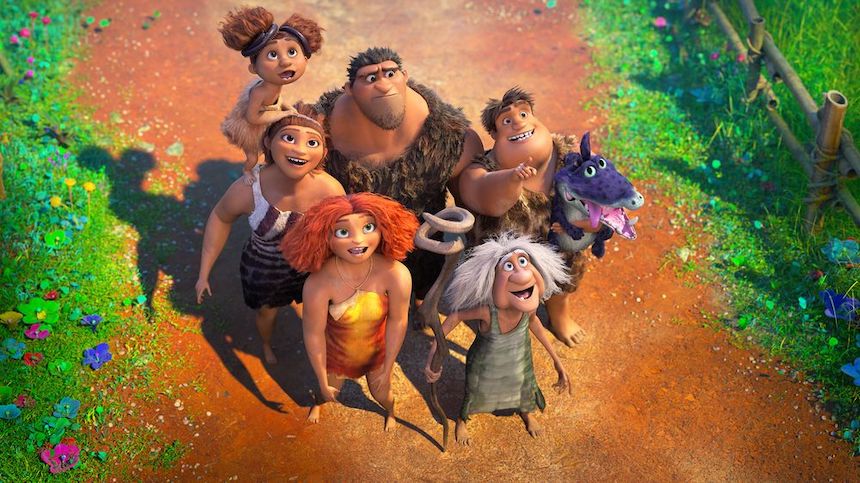 Living through a seemingly never-ending pandemic and self-quarantining/sheltering-at-home (for some, if unfortunately, not most) puts a premium on escapist pleasures, like an animated Nicolas Cage-headlining a long-delayed sequel, The Croods: A New Age. The first film, a DreamWorks Animation family-oriented action-comedy, turned a modest profit seven years ago, spawning a short-lived Netflix animated spinoff that left little pop-cultural impact behind. After several false starts on a direct sequel, including the sale of its onetime distributor, 20th-Century Fox, to Disney, The Croods: A New Age arrives during what’s usually the lucrative four-day Thanksgiving weekend in a handful of multiplexes and drive-ins across the country. What would have been a no-brainer in pre-pandemic times, however, isn’t in the middle of a pandemic, but for families venturing out beyond the confines of their homes, The Croods: A New Age will remind them of a brighter, better world both in the past and hopefully, in the immediate future.

When we last left the prehistoric Croods, Grug (voiced by an unusually subdued Nicolas Cage), the family patriarch, Ugga (Catherine Keener), Grug’s wife and all-around pillar, Eep (Emma Stone), their independently minded teen daughter, Thunk (Clark Duke), Grug and Ugga’s thick- bodied and -headed teen son, Eep and Thunk’s grandmother, Gran (Cloris Leachman), the dictionary definition of feisty and/or ornery, and Sandy (Kailey Crawford), Grug and Ugga’s bite-happy, feral youngest, had survived a series of life-threatening natural disasters with the help of a slightly more evolved outsider, Guy (Ryan Reynolds), a teen like Eep and Eep’s romantic interest. While Grug reconciled himself to living in a dangerous, predatory world instead of living in complete and utter fear, the newly expanded Croods still didn’t have a permanent home, just a dream of one (Guy’s “Tomorrow,” a literal location that’s always right beyond the horizon).

In The Croods: A New Age, the Croods literally stumble into a veritable Technicolor Eden, but the Adam and Eve counterparts they meet in a gated Land of Plenty (and Honey), Hope (Leslie Mann) and Phil Betterman (Peter Dinklage), are nothing like their Old Testament analogues. Through hard work and no small measure of good luck, they’ve created a walled-in farm filled with more than enough food to sustain a small village, not just one or two families. Playing off the “New Age” of the title, the Bettermans function as analogues or stand-ins for a certain kind of left-leaning, meat-avoiding, metaphysically minded hippie types familiar to anyone with cliches about California. The Bettermans are friendly enough, of course, but they’re also super-protective of a teen daughter, Dawn (Kelly Marie Tran), of their own, whom they want to romantically partner with Guy.

A slight, if obvious parody or spoof of modern conveniences and the creature comforts of consumerism — first-time director Joel Crawford and his four-man screenwriting team, Kevin Hageman, Dan Hageman, Paul Fisher, and Bob Logan, lean hard, sometimes too hard, into running jags involving the contrasting personal hygiene of the two, ill-matched clans (the Bettermans have running water, modern plumbing, etc.) — The Croods: A New Age finds just as much humor in the clashing familial styles of the brawny Croods, where togetherness means curling into a sleep pile every night and hunting and gathering as an ethos and way of life, and the brainy Bettermans, where everyone gets their own private room in the treehouse, comfortable beds or hammocks, and flip-flops along with the overabundant food supplies that come with settled, sedentary agrarian life.

Crawford and his credited screenwriting team initially use the Croods-Betterman family conflict to drive the plot, but soon enough, they introduce a new, external source of conflict and antagonism. It’s safer too, since it means audiences don’t have to choose one family or one family’s way of life over the other, but instead root for them against the new, external threat. While it feels like a bit of a cop-out (because it is), Crawford, his screenwriting foursome, and their talented team of animators pull out all of the veritable stops in the third act, going big (or bigger) before going home. The already bright and bold colors get brighter and bolder, the action sequences become more inventive and chaotic, and the go-along to get-along resolution, though predictable, gets far more satisfying by the time the characters and by extension, the audience, arrive at a denouement that resolves every conflict and closes out every narrative thread.

The Croods: A New Age