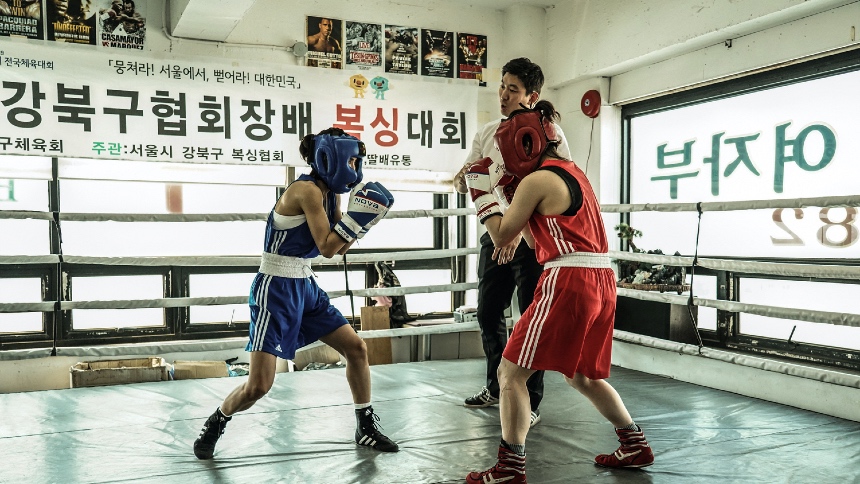 After opening the festival in 2018 with Beautiful Days, director Jero Yun returned to Busan this year with his second narrative feature Fighter, which once again focuses on a North Korean defector's difficult experience adjusting in South Korea, and how it tears apart her family. As a sports film and a social drama, Yun's latest is a by-the-numbers affair, but it succeeds as a character study, largely thanks to Lim Seong-mi's formidable lead performance. Yun actually had two films at the festival this year, along with the documentary Song Hae 1927.

After spending several months in a readjustment center, North Korean defector Jin-ah is relocated to her own apartment and starts looking for work. She finds a gruelling job as a server at a small restaurant, but since she needs to save up money to bring her father over from China, she decides to seek out an additional position. She asks around for more work before hesitantly taking a position as a cleaner in a boxing club. Seeing other women training for fights awakens something in Jin-ah and with the encouragement of the junior coach who hired her, she starts to train in her spare time. Yet before long, this leads to other confrontations outside of the ring.

Fighter explores very similar territory to Beautiful Days but while the former film was a more ambitious affair split between China and South Korea and different timelines, Yun's new work is a stripped down and far more effective offering that relies on a simple but compelling metaphor: boxer Jin-ah is 'fighting' for her right to live and be seen.

The hardship of North Korean defectors trying to adjust to life in South Korea, which often entails discrimination and limited opportunities, has been the basis for several low-budget films over the past decade. Notable among them being Park Jung-bum's The Journals of Musan and Jeon Kyu-hwan's Dance Town, both of which debuted at Busan exactly ten years ago, as well as documentaries like Im Heung-soon's Ryeohaeng and Lee Hark-joon's A Good Business.

Unlike those prior films as well as his own debut, Yun largely tries to avoid painting a grim portrait of a defector with a conflicted national identity who has been pushed to the very fringes of society. Instead, Jin-ah is someone who tries to make something of herself and doesn't give up when she falls down. Discrimination certainly rears its head from time to time, and Yun also injects a half-baked episode of a relocation manager who becomes a bastard when she rejects his drunken sexual advances, but for the most part this is a portrait of a determined character carving out the life she wants for herself.

As a boxing film, Fighter takes its cue from films like Million Dollar Baby and the Japanese gem 100 Yen Love, but once Jin-ah fully commits herself to the sport, Yun doesn't really seem interested in exploring the tropes of the genre. Beyond an obligatory montage and a rivalry with a snooty rich girl at the club, there's little boxing action, and Jin-ah's seemingly effortless rise (party buoyed by her novelty factor as a defector in the ring) skips over quite a few steps. A major fight in the second half immediately loses all tension when the film suddenly turns into a full-on family drama.

Abandoning the social commentary and sports tropes completely, Fighter is at its weakest in this final stretch, which explores Jin-ah's unresolved relationship with a figure from her past. It's very straightforward and predictably maudlin from there on out as Yun's about-face saps the energy out of what had been a steady and focused character study.

The only consistently satisfying thing in Fighter is Lim Seong-mi, who is naturalistic and commanding as the hard-nosed protagonist, while also hinting at the desires Jin-ah tries to keep at bay through her hesitant body language and cold, longing stares. Yun is wise to keep his camera close and let Lim do the heavy lifting. It's just a shame that such a substantive character and performance have been dropped into such a bland narrative.

Do you feel this content is inappropriate or infringes upon your rights? Click here to report it, or see our DMCA policy.
biffboxing moviebusan film festivalfighterjero yunlim seong-minorth korean defector윤재호임성미파이터