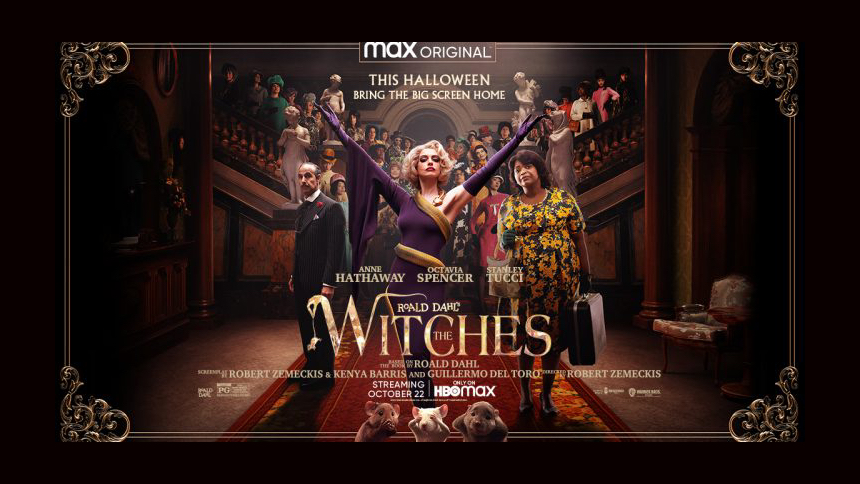 As you know, witches hate children.

A new adaptation of Roald Dahl's venerable fantasy is set in the American Deep South of the late 1960s. For adults, the chosen setting may invite expectation that the film will directly address the widespread racism that was prevalent during that era throughout the United States, and in that geographic region, especially. Otherwise, why set the film during that time and in that place?

Answers are not immediately forthcoming in the screenplay credited to Robert Zemeckis, Kenya Barris, and Guillermo del Toro. (Apparently, del Toro worked on a script for a stop-motion animated adaptation some 10 years ago. More recently, writer/producer Barris, known for his television series Black-ish, along with his feature scripts, including Girls Trip and Shaft, came on board to retooled the script).

Over the course of its running time, The Witches acknowledges yet does not dwell upon the obvious racist trappings of that tumultuous period of history. Instead, time is spent showcasing a Black woman as a hero who outwits a powerful supernatural force through her cunning and intelligence, with the full support of three plucky children who remain cheery and optimistic, despite being transformed into mice.

The bones of the story remain strong as a skeleton for a special-effects enhanced fantasy pitting wily children against wicked witches. Upgrading the kind, wise, supportive yet sickly Grandma (Octavia Spencer) into a leading role, the film benefits from her strength of character, providing an even stronger role model for her young grandson (Jahzir Bruno), who is still dealing with suffocating grief after losing both his parents in a tragic accident.

It turns out that Grandma herself is still dealing with a tragic memory from her childhood involving the supernatural, so she quickly believes her grandson's story about an unwelcome visit from a witch and hustles them out to safety in a seaside resort. That is where they encounter a dastardly collection of witches, who all hate children and plan to do away with all the little brats. Grandma, however, ain't having it.

Directed by Robert Zemeckis, The Witches becomes a battle between Good and Evil, pitting Octavia Spencer against Anne Hathaway, who inhabits a malicious role made more malevolent by Anjelica Huston in Nicolas Roeg's 1990 film version. Truth be told, I only caught up with Roeg's delightful concoction last week, so the new version is not fighting against fond memories from my childhood.

Without any personal emotional baggage involved, it's easy to enjoy and be fully entertained by what Zemeckis and company have conjured up. It represents an uptick from the director's most recent films, or maybe it just plays better for me, because it appears to be most focused on the entertaining focal points of Roald Dahl's story, while also sneaking in subtle messages that will resonate further and deeper than first suspected.

Do you feel this content is inappropriate or infringes upon your rights? Click here to report it, or see our DMCA policy.
Anne HathawayHBO MaxOctavia SpencerRobert ZemeckisStanley TucciWarner Bros

More about The Witches