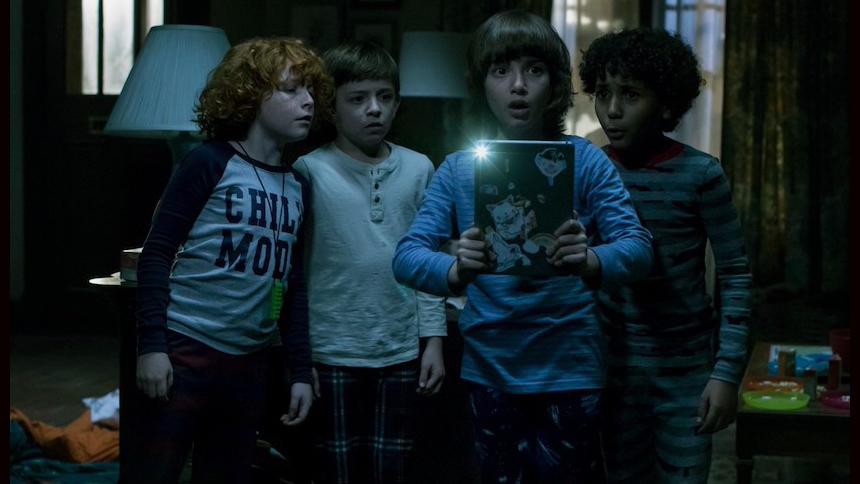 The tagline for writer-director Jacob Chase’s feature-length debut, Come Play, claims the film will deliver “a terrifying new vision in horror [that] awaits [the unsuspecting viewer].” That’s quite the promise for any film, let alone a writer-director’s first effort, to make regardless of the genre or the budget involved.

That hyperbolic tagline automatically sets expectations to “high,” rather than just “medium” or even “low.” Unfortunately for Chase and, by extension, viewers giving Chase and Come Play a chance, it’s a promise the middling, banal, ultimately dull addition to the “supernatural friend” sub-genre is not able to fulfill. Scarce on thrills, chills, or scares, Come Play never rises above its surface-level influences (chief among them, The Babadook, Mama, and Under the Shadow) or mechanistically delivered scares, resulting in a forgettable effort unworthy of the seemingly obligatory sequel or an ongoing horror-themed series.

Come Play more or less centers on Larry (a non-frightening name for a scary monster or a super-creep if there ever was one), an asthmatic, extra-dimensional creature with poor posture and even poorer manners (he’s lonely, so he steals friends via technology). Initially introduced as a red-eyed apparition hiding in a kid’s closet then later revealed as a gangly, emaciated monster who watches lonely kids like Oliver (Azhy Robertson), a non-verbal preteen who uses software apps to communicate, through the other side of cell phones or tablets. Larry sends Oliver a Babadook-inspired digital storybook, “Misunderstood Monsters,” that Oliver eagerly reads on his cell phone. With each new page read and each new page turned, Larry somehow gains strength, readying himself for the leap from the other side of Oliver’s screen to the real-world.

Oliver’s about-to-divorce parents, Sarah (Gillian Jacobs) and Marty (John Gallagher Jr.), take vastly different attitudes to raising Oliver. Sarah’s the helicopter parental figure, suffocating Oliver in attention while neglecting her relationship with the increasingly resentful Marty. For his part, Marty leaves all of the hard parenting to Sarah, taking a hands-off approach that’s inevitably led to fissures in their marriage. (When we first meet him, he’s couch-surfing.) Once Larry makes his presence known and Oliver’s interactions take a turn for the worse, including a head-scratching, overnight playdate with Oliver's grade-school bullies led by onetime-friend-turned-antagonist Byron (Winslow Fegley), Sarah awakens to the possibility that Larry isn’t just Oliver’s imaginary, wannabe friend: He’s an existential threat to Oliver and everyone around him. (Insert yawn here.)

Not surprisingly, Marty fills the role of skeptic typical of supernatural dramas and thrillers, questioning Sarah’s claims about the supernatural presence antagonizing his family until, of course, Larry makes himself known to Marty in not-quite spectacular fashion. Marty meets Larry via a late-night visit to Marty’s isolated, late-night workplace, a parking lot booth, and figurative lonely island. It’s not the first nor the last set-piece to feature Larry tormenting the central trio individually or collectively, but it’s probably the best staged, shot, and edited set piece in Come Play.

Unfortunately for anyone on the other side of the digital screen, though, that particular set-piece lands somewhere around the halfway mark, leaving Chase, expanding his similarly themed short into a full-length film, scrambling to fill up the remainder of Come Play’s running time before a painfully predictable, tension- and suspense-free finale that pits Sarah, the embodiment of the loving, protective, compassionate mother, against Larry the menace (who’s really just misunderstood and needs a friend and a friend in need is a friend indeed).

Between a woefully underdeveloped premise, outdated, cliched technophobia, and thin, borderline caricatures masquerading as characters, Come Play has little to recommend it beyond committed performances from Gillian Jacobs, Gallagher Jr., and Robertson (Marriage Story), capable cinematography from longtime horror veteran Maxime Alexandre (Crawl, The Nun, Annabelle: Creation, Mirrors), and Roque Baños' (Don’t Breathe, Evil Dead) minimalistic functional score. Chase shows occasional signs of competency especially early on when Larry appears as either a fleeting, background presence or as the equivalent of augmented reality, but too often he makes a fundamental error typical of first-time filmmakers, focusing on hitting a predetermined running time rather than working from shot to scene to sequence and finally to story. With additional experience behind the camera and possibly a writing partner, Chase might show more flashes of promise the next time out.

Come Play is now playing in select U.S. theaters and is also available to rent or buy via VOD platforms. Visit the official site for more information.

Do you feel this content is inappropriate or infringes upon your rights? Click here to report it, or see our DMCA policy.
Azhy RobertsonFocus FeaturesGillian JacobsJacob ChaseJohn Gallagher Jr.US