Now Streaming: THE RIGHT STUFF Charts a Different Path to the Stars

Jake McDorman and Patrick J. Adams lead the cast in a new adaptation of Tom Wolfe's book, now streaming on Disney Plus. 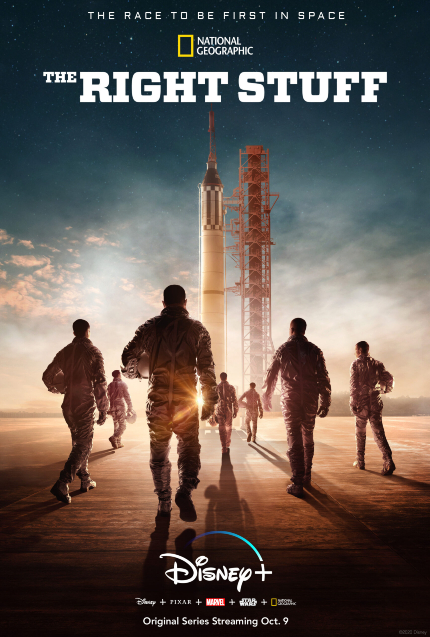 The Right Stuff
The first two episodes of the eight-episode series are now streaming on Disney Plus. The remaining episodes will be available each Friday in subsequent weeks.

Adaptations from the page to the screen are always challenging, especially when the source material is well-known.

Director Philip Kaufman rose to that challenge magnificently, writing an adaptation of Tom Wolfe's popular book, first published in 1979, that dramatized the adventure, the romance, the thrills, and the dangers in a film that ran more than 193 minutes, yet felt like a jolt of caffeine injected directly into the bloodstream. (Granted, there was an intermission during the packed, original theatrical screening I attended in October 1983.)

I've watched The Right Stuff more times than I can remember since its 1983 release, which played as a fitting contrast/compare with life in those United States in that era (i.e. Reagan's America) and has held up to repeat viewings every time since. I'm sure that my own childhood, dreaming of flying to the moon, or at least blasting off into space, makes me biased in favor of the movie too, especially since, by 1983, a decade had already passed since America's last mission to the moon. We also knew the fate of some of the Mercury Seven, adding to its bittersweet poignance.

So, yes, I carry more than my fair weight of baggage into a new adaptation of Wolfe's book that recently made its debut on the Disney Plus streaming service. (The first of two episodes that premiered this past Friday also acknowledged Kaufman's film as a basis for the series.) I've only seen one-fourth of the series so far, but my expectations have already been lowered considerably.

From the perspective of someone who has always been interested in aeronautics and space travel, the story of the early days of NASA remains fascinating. (That's probably one reason I enjoyed Hidden Figures (2017) more than ScreenAnarchy's own Jim Tudor did.) And the more that the new The Right Stuff peeks behind the curtains, the more compelling it becomes, especially in the second episode, when we see the efforts of NASA publicist John "Shorty" Powers (Danny Strong) to guide a group of ace test pilots through uncomfortable, if newsworthy, hoops at the time.

Strong's notable strong presence as an actor also contrasts with the actors who are still endeavoring to capture the full flavor of the Mercury Seven test pilots, dubbed 'astronauts.' Maybe it's just me and my generation of viewers, but it's difficult to erase or replace indelible memories of Scott Glenn, Ed Harris, Dennis Quaid, Fred Ward, Lance Henriksen, Scott Paulin and Charles Frank.

The series appears to be making astronauts-in-training Alan Shepherd (Jake McDorman) and John Glenn (Patrick J. Adams) the focal points, contrasting Shepherd's boisterous, lusty adventures with Glenn's stoic patriotism and personal morality, especially as seen in the second episode. But we'll have to wait to see how things will unfold from here.

This is not Quentin Tarantino territory. Yet, perhaps the show will become more compelling dramatically and/or add a few narrative surprises and/or explore greater character insights and/or display more clever visual delights into a well-documented story.

After all, not everyone's as much of a space fanatic as I am.