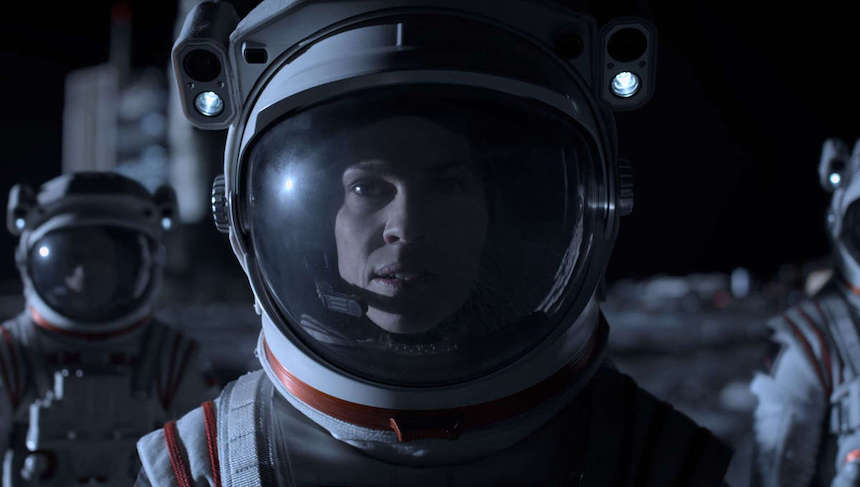 If you took the basic plot from Brian DePalma’s unjustifiably maligned science-fiction epic, Mission to Mars, subtracted the pyramids, aliens, and an ending lifted shamelessly from Close Encounters of the Third Kind or even E.T.; The Extraterrestrial, but kept the long, obstacle-fraught journey from the Earth to the red planet, expanded said plot into a 10-episode, prestige-level series, and added a shedload’s worth of emotion-first, intellect-second content in support of a purposely positive, optimistic message about interpersonal and international cooperation, you’d come close to Netflix’s latest science-fiction series, Away. With typically high-end, seamless production values, including visual effects equal to or better than any streaming or premium cable series, multi-dimensional characters, and finely tuned storytelling, Away delivers familiar, if no less welcome, diversionary pleasures.

Centered around two-time Oscar Winner Hilary Swank’s mission commander, Emma Logan, her earthbound husband, Matt (Josh Charles), an ex-astronaut and NASA engineer, their teenage daughter, Alexis (Talitha Eliana Bateman), and Emma’s international crew, Ram (Ray Panthaki), Emma’s Indian-born second-in-command and mission co-pilot, Misha (Mark Ivanir), a Russian engineer, Kwesi (Ato Essandoh), a British botanist, first-time space traveler, and the crew's only outwardly religious member, and Lu (Vivian Wu), a stoic Chinese chemist apparently selected by international agreement for the Mars version of Neil Armstrong (i.e., she’ll be the first human to take a footstep on the red planet), Away opens not on Earth, but on the moon, with a space-suited Emma making final preparations for the history-setting, three-year mission to Mars and back.

Written by series creator Andrew Hinderaker and directed by Ed Zwick (Defiance, The Last Samurai, Legends of the Fall, Glory), the first episode, “Go,” sets the template for the remainder of the series, intermixing space-bound or space-set scenes of Emma and her crew aboard the Atlas I with Matt and Alexis’ life back home. With an able assist from showrunner Jessica Goldberg, Hinderaker and Zwick lean on flashbacks to fill in Emma’s backstory (later, every member of Emma’s crew gets their own flashback-filled, spotlight episode), last-minute prep and checks, doubts around Emma’s abilities as a commander based on a minor accident on the Earth-to-moon voyage that splits the crew between supporters and doubters, and finally, Matt’s sudden hospitalization due to a not-unexpected stroke from a congenital defect, forcing Emma to make a literally last-minute, life-altering decision (“Should she stay or should she go?”).

It’s spoiling little beyond the first episode to reveal Emma’s choice: She decides to lead the mission to Mars, after all, leaving Matt and Alexis behind on Earth, Matt to recover and rehab from the stroke that leaves him in a wheelchair, Alexis to process the complex, potent mix of feelings and emotions (pride, love, resentment, bitterness) that result from Emma’s departure and their increasingly long-distance relationship during a particularly formative time in Alexis’ development. While Matt gradually leans more on more on another ex-astronaut, Melissa Ramirez ( Monique Gabriela Curnen), and her daughter, Cassie (Felicia Patti), as a makeshift support network and temporary family (cue semi-unforeseen involvement), Alexis connects with an older high schooler and Motocross super-fan, Isaac Rodriguez (Adam Irigoyen), with some serious emotional baggage and/or scars of his own.

Both the earthbound and space-set scenes turn on emotional entanglements of one kind or another, though the intense, often claustrophobic space-set scenes create an extra level of complexity for Emma and her crew. Emma has to work through her crew’s doubts about her leadership skills, a closeness bordering on intimacy with Ram, and repeated conflicts with the stoic, rational-first, emotion-last Lu. Though Lu has a family of her own (husband, son) and an unexpected, earthbound entanglement revealed in her spotlight episode, she’s far more rigid, far more inflexible, and rule-bound than Emma, setting up a dichotomy between their personalities and points-of-view that runs through most of the episodes, resolving itself only as a result of the long months spent together and the crises they encounter on the mission to Mars.

No mission to Mars, though, would be particularly engaging, let alone entertaining, without voyage-based obstacles, problems, or issues to resolve on an episode-by-episode basis. Away relies on tried-and-true and therefore not-unexpected crises for the Atlas crew to overcome, from a solar panel on the Atlas I that doesn’t unfurl properly (necessitating the first, heart-stopping spacewalk), water-filtration/recycling issues (and thus, dehydration), infectious diseases that could scuttle the mission, emergency surgeries (cue staple gun), and a potentially errant supply ship (an idea lifted shamelessly from The Martian). Even then, Hinderaker and his writing team keep the interpersonal issues and problems near the foreground, though they over-rely on Emma’s self-doubts and general instability as a recurring plot point for Away.

Away significantly benefits from a better-than-average cast delivering better-than-average performances, starting with Swank (no surprise there) and Charles (likewise) through Wu, Ivanir, and Essandoh aboard the Atlas I (Essandoh especially) elevates the spiritually minded spaceman role). Among the earthbound cast, Bateman, Irigoyen, and Curnen leave indelible marks on their respective characters, adding a bit of heft, weight, and gravity to occasionally underwritten roles or on-the-nose, expository dialogue.

Away is now available to stream via Netflix.

Do you feel this content is inappropriate or infringes upon your rights? Click here to report it, or see our DMCA policy.
Hilary SwankJosh CharlesVivian Wu