At a nightclub party, the DJ, a young man named Neel (Noble Luke), ends up hooking up with a girl (Sitara, played by Navjot Randhawa), who eventually invites him to her house. Soon enough, what seemed like a regular, fun night, turns into something else. Neel finds out that Sitara’s relatives –including her mother Tara Devi (Avantika Akerkar), her younger sister Sara (Kanak Bhardwaj), a friend of the family (Panditji, played by Sudhanva Deshpande) and their housemaid Magdali (Anuradha Majumder) – are congregated for the patriarch’s last rites.

Our protagonist knows something is wrong. Sitara appears to have her own agenda, much like her mother, which makes us wonder: is Neel’s presence circumstantial or is he actually a key part of the death ritual?

In Kriya the creepy vibe is omnipresent, there’s a dose of psychological horror (Neel has visions and hears the voice of a man who appears to be his own father) and, ultimately, it’s intentionally disconcerting. To learn more about its themes, here’s the conversation I had with Srinivasan during Fantasia.

ScreenAnarchy: The first sequence with the DJ at the party is so different, so modern, in comparison to what follows in the film. Why did you decide to start KRIYA like that?

Sidharth Srinivasan: That’s a lovely question. Part of the idea of the film was to depict the conflict between the traditional and the modern. The idea of the opening nightclub sequence was that we are traveling from the “modern world” into this traditional, ritualistic kind of space which is the mansion, this Hammer horror house, gothic mansion where the family lives. That was really the intention. There's modern technology in the nightclub but if you notice, inside the house there are no mobiles, no computers, there’s nothing. That sort of tension between modernity and tradition, and modernity and ritualism, that was the idea of that opening sequence... and closing sequence.

The “black ritual” feels realistic, it’s very detailed. What was your source of inspiration for it?

Actually, part of the inspiration for the film came from having attended the last rites, the death ceremony of someone. But my experience didn’t give me any solace, you know? It left me with a lot of questions. Nobody asks questions of ritualism, you just follow blindly, you don’t ask why I’m doing something. I think that’s true of ritualism across the world.

The last rites of this gentleman, that became sort of the vehicle for the script. I thought I could evoke my concerns or I could ask questions of this broader context of patriarchy in organized religions. All organized religions are patriarchal, ritualistic practices are patriarchal. So to be specific with Hinduism, the desire for the male child, the fact that only a son can perform his parent’s last rites. Now it’s abolished, it’s banned but the older practice that a widow used to burn herself on a funeral pyre during the cremation, because she had no identity, a woman without a husband or a father or a son had no identity. 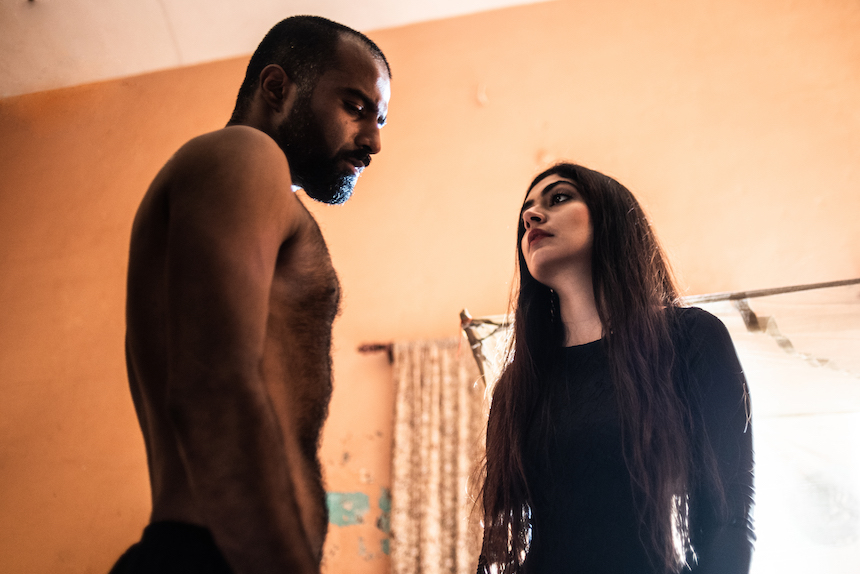 All these themes kind of played into the narrative of Kriya. I wanted to make it very claustrophobic, intense, with closeups, in a single space. Also because I didn’t have a big budget, I had to come up with a script that required a single space, limited actors and so forth.

The rituals depicted in the film, since you observed that they are very realistic, there’s a lot based on reality but to be honest with you, every part of India would have slightly different rituals, in Hinduism itself, different communities would have different rituals. I kind of did quite a bit of research, a lot of it is based on reality but a lot of it is a figment of my imagination. I ran with the idea that it’s a black ritual, it’s a subversive ritual, it’s a transgressive ritual where left is right and north is south and holy water is blood and so forth. That was the idea.

In this subtext you introduce the classic horror character that, like the audience, senses something is very wrong there but can’t escape. In that sense, how was your approach to the purely horror side of the material?

One obvious question would be: why doesn’t he get the fuck out of the place? [laughs]. But to be honest, he tries to leave at least four, five times. The fact of the matter is that he’s a good guy and he has that male guilt, he suffers from male guilt. He thinks he’s like a Good Samaritan, that he can save Sitara and her sister. Then there comes a point where you don’t know whether is real or an illusion, you don’t know whether what’s happening is really happening or not. He himself has a very troubled past, which sort of surfaces by the experience. So, is he just a victim?

Because the truth of the matter, that was the real subversion of the film, which is that the female characters are very strong and they seem to be evil and controlling, but by the end of it you realize that they are the victims. Because he becomes the patriarch of the family and he’s the evil one, you know? It kind of subverts the norm, which is to say that at the end the family unit is patriarchal. As long as that happens, and as long as the son is not born to this family, this cycle will keep on going on and on, where the women are kind of used.

Aside of these themes, I guess it was also very important to make an effective horror film, with the voices, the sounds and all of those elements that try to put us in that scary, creepy mood.

I don’t enjoy editing because I feel I’m confronted by all the mistakes I made while I was shooting. I feel like, “oh my God, that went wrong” and so on. But I absolutely adore sound design, it’s one of my favorite workflows in the filmmaking process. We took a lot of pains over it, my sound designer was amazing, Debangshu Roy. We realized we couldn’t do sync sound, he tried but we just couldn’t because there was too much traffic very close by, believe it or not. The entire film is dubbed, everything you hear is sound design, the entire sound is recreated in post. It took quite some time because every actor had to dub their parts.

Then of course I was really fortunate to have a mind-blowing mixer, Martin Pavey, who has done a bunch of Ben Wheatley stuff and Peter Strickland stuff in London. He did the sound design and of course Jim Williams did the score. It just all really came together when it came to the sound, because the sound design, and the mixing especially, is when you’re breathing life into the film and by that time as a filmmaker you’re so tired, almost exhausted, with seen the visuals again and again. And suddenly you hear the mix and it comes alive all over again, it’s like a rebirth in a way. 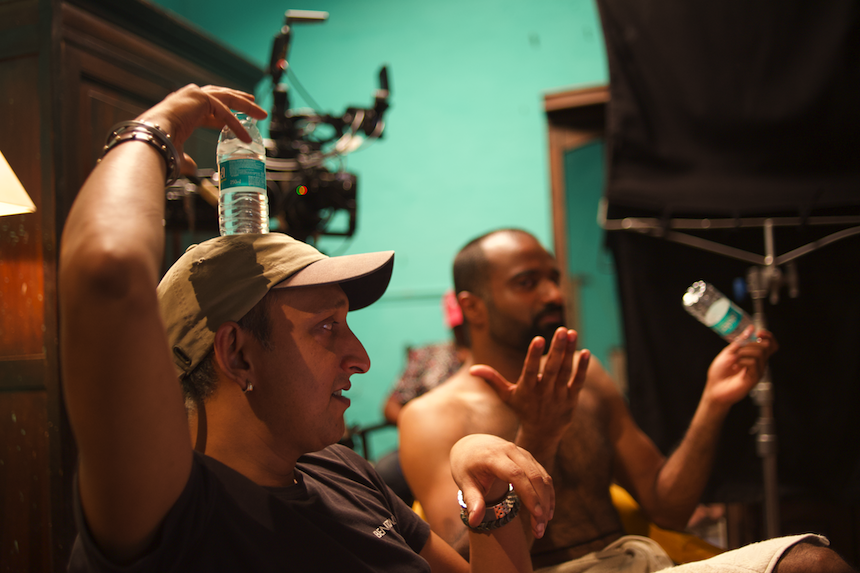 All of the female characters, Sitara, Sara, Tara Devi and Magdali, have interesting backgrounds. What was the challenge when writing these roles?

That’s a great question, Eric, really. I did it very honestly because as I mentioned, the idea was that the women are very strong. Even the nudity of Sitara, she’s strong in her nudity as opposed to the nudity of Neel, where he’s submissive and vulnerable almost in being nude. The female characters are very strong, their projection is very strong. The idea was to pull the rug from under the feet of the audience and say that actually they’re victims in a patriarchal familiar setup, society and religious situation. That was the idea and that was the challenge of the script.

But I didn’t want to just make a social realist film that’s totally understandable. I didn’t want to portray the women as simple victims. I’m so gratified because after the premiere at Fantasia, the press reviews have been coming from female critics, honestly, already there are like 30 reviews and the best ones have been by women. I must have done something right, I suppose, but it was my biggest concern to be honest with you.

Then you have another character like Panditji who remains mysterious. I guess your general approach was to go for the more ambiguous kind of movie that provokes different interpretations. Am I right?

Yeah, it’s not straightforward. Truth be told, growing up I’ve always been influenced by the so-called arthouse masters of cinema. I’ve watched a lot of cinema. I found increasingly with all the films I’ve made and my film viewing that the kind of cinema... [Andrei] Tarkovsky, to name a great filmmaker and to quote him in a way, he said that there are two kinds of filmmakers: the types who hold a mirror up to society and then those filmmakers who create a world of their own.

I most certainly fall into the latter category, I want to create my own world. In genre cinema you’re creating your own worlds, genre allows you to ask questions and provoke and get away with it. For me it’s like therapy, it forces me to confront my own deepest anxieties and my own concerns and really examine myself as a male and my own male guilt and my own sense of patriarchy.

What do you want audiences to take away from watching KRIYA?

For me really it’s like a reinvention of the social drama, where these deeply intrinsic patriarchal themes are push to genre, almost gothic genre extremes. It would great if guys just examine what they take for granted. There’s a sense of liberation with that understanding.

I think a lot of people are believers, they believe in God and ritual and whatever. But why do we take everything for granted? Why do we not ask questions? Why does religion resists change with the changing times? It’s a cliché but the more things change, the more they remain the same. That’s in a sense what it’s about, therefore the tradition and modernity.

When I wrote the script, just to give you an example, the nudity was very much there, I wrote it in the script but I didn’t want to mansplain. Moreover I was very clear, for example, that I would not have female nudity unless I could have male nudity. This is a different world, people are so much more aware of these things. We have a long way to go still but, as I said, I found it so gratifying that female Western critics really appreciated the film out of Fantasia. That’s been the biggest takeaway for me.