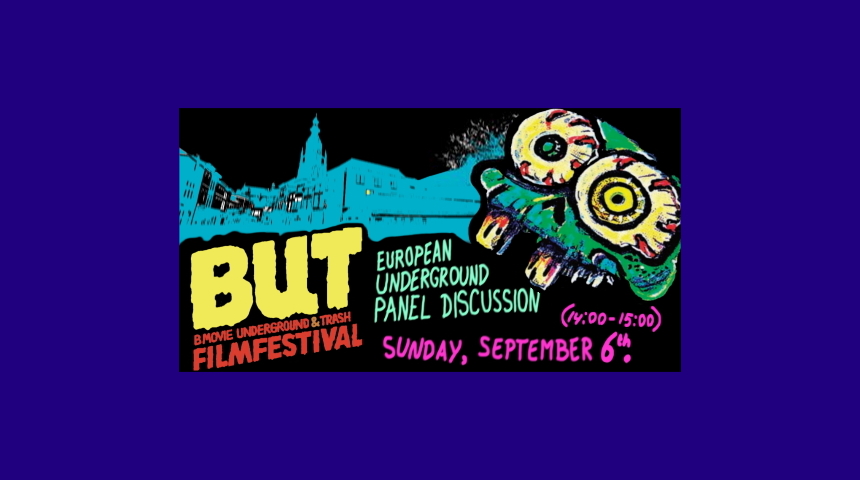 Pandemic or no pandemic, the Dutch genre film festivals are managing, albeit with some obvious changes. The Breda-based B-Film, Underground & Trash Film Festival, BUTFF for short, was expected to be celebrating its 15th iteration this year in a grand fashion, but alas, huge parties cannot be held at the moment. The festival still has some impressive screenings and live performances though, and has added several drive-in events and online events. The theme this year is "Holy Shit!", and you can see the overview on their site.

One of the online events is a panel discussion about European Underground films, which will be held this Sunday, from 14:00 till 15:00 Central European Time (note to everyone West of the Atlantic: for you, this will be in the morning).

In this panel we join several festival directors and filmmakers to discuss the following topic: while in English-language countries like the United States, there seems to be an established network of underground directors (and their fans) who know each other, and news spreads quickly whenever something is being made. In Europe we seem to lack a network like this. How can people discover European "underground" films? Do festivals and creators lack the ability to find each other across languages and borders? Would the European industry benefit from a platform for streaming, crowdfunding and talent-searching specifically for "underground" films? Or would underground cease to be underground when you organize it like that?

Each panel segment will be introduced through a short film by Tinam Bordage, in which he presents his view on the French underground scene. You can join and listen in on the discussion, which will be moderated by me, by clicking this link, clicking on the event for Sunday, and following the instructions (which will be there on the day itself).

So cheers, and who knows: maybe we'll see each other on Sunday!