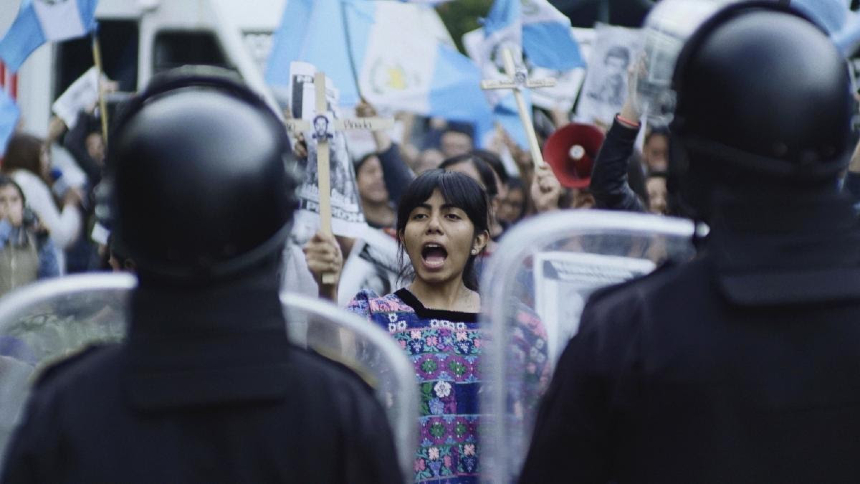 They wear human faces, looking like you and me. Some even wear the genial, kind visage of the grandfatherly Enrique (Julio Diaz).

With the exception of his personal bodyguard, Letona (Juan Pablo Olyslager), longtime maid, Valeriana (María Telón), and a small, household staff, Enrique and his family have the mansion to themselves. With a trial for genocide in his immediate future, Enrique's hold on reality begins to crumble.

He begins to hear the voice of a weeping woman emanating from the walls. When he investigates, a firearm in hand, he almost shoots his wife, leading Letona to extricate the firearm from Enrique's possession and Enrique to feel even more vulnerable to the real and possible non-human forces arrayed against him. The past, at least for Enrique, can't be permanently subdued, let alone repressed.

Bustamente uses testimony, specifically an indigenous woman who speaks truth to literal power, exposing Enrique's crimes against humanity to the general public. Enrique falls mysteriously ill during the trial, necessitating an extended hospital stay (it's performative, meant to generate public sympathy). In a central scene, Bustamente deftly employs a slow backward zoom, starting on the unnamed women's face before pulling back, word by damning word, phrase by damning phrase, sentence by damning sentence, to take in the gallery, including Enrique and his family.

Bustamente allows a brief glimpse of actual justice when the court finds Enrique guilty, only to snatch it away moments later when an appellate court overturns the verdict, freeing Enrique to live out the remainder of his days in general comfort. Justice, if and when it arrives, Bustamente suggests, doesn't or possibly can't come through a corrupt criminal justice system (at least not in contemporary Guatemala), but through active, persistent political protest and public pressure.

As Enrique and his family become prisoners in their own home, a mysterious, long-haired young indigenous woman, Alma (María Mercedes Coroy), slips through the demonstrators outside Enrique's home, offering her services as a maid. Shy and introspective, Alma ("soul" in Spanish) functions partly as an almost silent witness and partly as a catalyst for the next series of plot turns in La Llorona.

What starts as a straightforward horror drama about singular guilt and personal responsibility (Enrique's) gradually turns into a probing, provocative study of familial complicity, of guilt by association as Bustamente shifts the focus from Enrique to the woman in his life, his compliant, supportive wife, his doubtful, uncertain daughter, and his naive, innocent granddaughter.

Alma's presence forces each one, in turn, to face their enabling complicity in Enrique's actions over the last several decades. Carmen's stubborn, willful ignorance and unerring support for her husband begin to slowly falter as a series of increasingly fraught, traumatic images begin to invade her dreams and leave marks on her body, leading her to question her sanity and her relationship with a husband she barely knows or understands.

Bustamente repurposes and recontextualizes the "La Llorona" legend (ghostly woman who kidnaps small children to replace her own, drowned children) to explore Guatemala's unresolved, unreconciled past. Alma stands-in for both the indigenous population and their brutal exploitation, suppression, and oppression under successive Spanish colonialist regimes and/or governments.

Her presence in Enrique's home serves as a quiet reminder of Enrique's war crimes, but also as the virtual, figurative, and literal personification of the "return of the repressed." Bustamente ultimately offers a hopeful vision for Guatemala, however, one where both the exploited indigenous population and their colonialist oppressors find common ground in the belief in karmic/supernatural justice, if not in the manipulatable, fallible rule of law.

Review originally published in February 2020, in connection with the film's premiere at the Sundance Film Festival. La Llorona is now streaming on Shudder.

Do you feel this content is inappropriate or infringes upon your rights? Click here to report it, or see our DMCA policy.
Jayro BustamenteJulio DiazMaría Mercedes CoroyMargarita KenéficSabrina De La Hoz