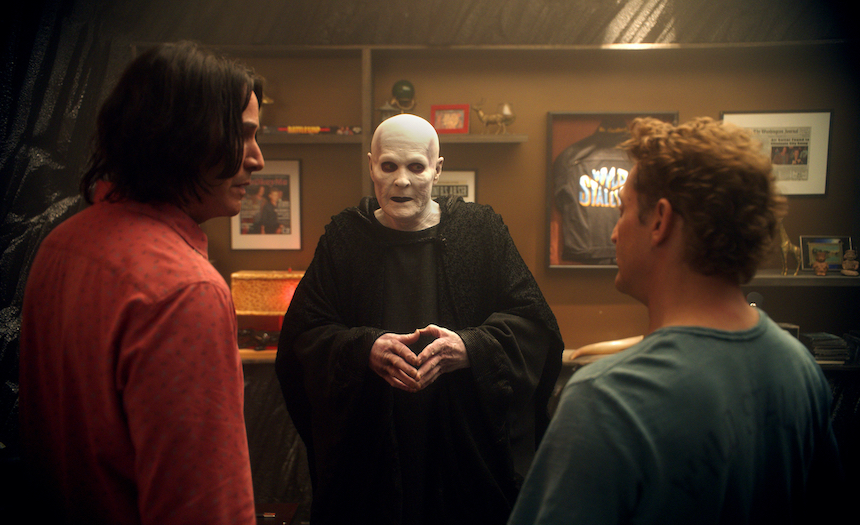 Arguably the first- or second-best time-travel comedy of all time (Back to the Future, of course, belongs in any conversation), Bill & Ted’s Excellent Adventure, a surprise hit in 1989 elated, elevated, and entertained moviegoers with its uniquely resonant mix of genial, good-hearted, musician-wannabe slacker heroes, laidback, So-Cal vibes, and paradoxically deliberately dumb humor (that actually wasn’t).

Middle-age has been mostly kind to the older, but most definitely not wiser William S. “Bill” Preston, Esq. (Alex Winter) and Theodore “Ted” Logan (Keanu Reeves) we meet in the opening moments of Bill & Ted Face the Music. They still have their health, their onetime-princess wives, Joanna (Jayma Mays) and Elizabeth (Erinn Hayes), and two adoring, music-loving daughters, Thea (Samara Weaving) and Billie (Brigette Lundy-Paine), but their once successful careers as arena-filling musicians, Wyld Stallyns, have stagnated under the pressure to write and perform the “song that will unite the world” and create the future utopia that will revere Bill and Ted as godlike heroes.

Exhausted by Bill and Ted’s pursuit of literally world-changing music, Joanna and Elizabeth push Bill and Ted into couples therapy except, of course, Bill and Ted, joined at the hip if not other body parts, assume both couples should attend the same session, much to the hilarity-inducing confusion of their therapist, Dr. Taylor Wood (Jillian Bell).

The unexpected arrival of another visitor from the future, Kelly (Kristen Schaal), warning Bill and Ted that their lack of musical progress will lead to the end of space and time as they and we know it, adds an extra layer of pressure to the already floundering Bill and Ted. Staring at a universe-shattering apocalypse and stuck at a creative impasse, Bill and Ted do what Bill and Ted, lifetime slackers both, always do: They nab an old-school phone booth/time travel machine, jumping ahead by several years at a time, each time hoping to borrow (i.e., steal) the song from their future selves. Each time they leap into the future, though, they encounter increasingly dire, desperate, Ghosts of Christmas Future-style versions of themselves, leaving them without a world-changing song as the end of space and time approaches forthwith.

In a parallel storyline of near-equal importance, Thea and Billie decide to borrow a time-travel machine of their own. Hoping to help their fathers with the world-changing/world-saving song thing, Thea and Billie journey through time, collecting musicians from different epochs, some obvious, some less, to serve as a potential back-up band if and when their fathers locate or create the world-changing/world-saving song that’s eluded them so far.

Not to be outdone, the supposed future where Bill and Ted are deified as (super) heroes sends a second agent into the past just in case Bill and Ted fail. And all that’s before ex-Wyld Stallyns member, bassist extraordinaire, and Disgruntled Reaper (William Sadler) makes a not entirely unwelcome, nostalgic return exactly when Bill & Ted Face the Music needs it most story and humor wise.

Besides the reintroduction of old-school favorites like the Reaper and, of course, the title characters themselves, Bill & Ted Face the Music mines several, overlapping themes for comedic effect, specifically the conflict between youthful expectations and dreams, and often harsh reality of adulthood, where expectations and dreams have to be recalibrated and readjusted downwards and values (i.e., career vs. family or personal life) have to follow. Bill & Ted Face the Music also contains an element of meta-fictional commentary on the rise and fall of creative careers that tend to follow with some regularity.

It’s meant, at least in part, as a reflection of Reeves and Winters’ respective careers as filmmakers along with their respective screenwriting partners, Chris Matheson and Ed Solomon. Despite its gentle, slacker humor, Bill & Ted Face the Music also openly acknowledges the passage of time (slacker or not, we all grow old) and the transference of hopes, dreams, and expectations between generations, ending with a shockingly moving finale that embraces the idea that families who make music or share creative endeavors together thrive together.

Do you feel this content is inappropriate or infringes upon your rights? Click here to report it, or see our DMCA policy.
Alex WinterChris MathesonEd SolomonKeanu ReevesUS

More about Bill and Ted Face The Music