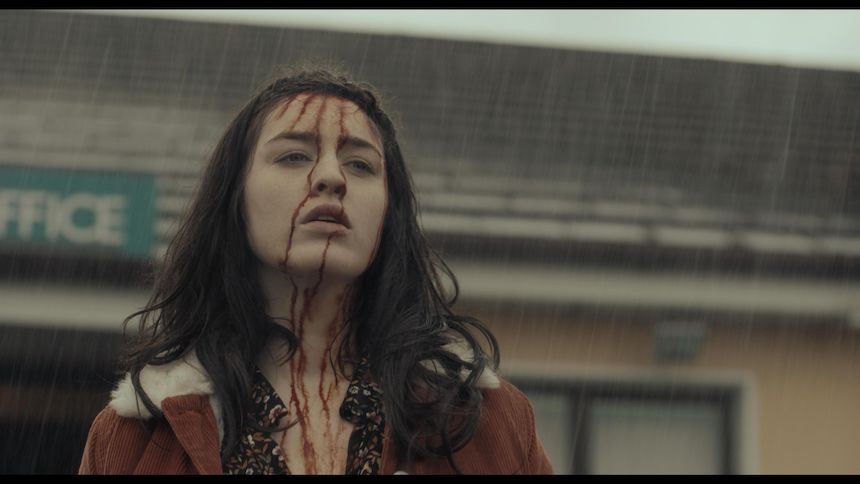 Since its inception, the Born of Woman shorts program at Fantasia has been a draw, selling out each screening at the De Seve auditorium at Concordia University every July.

This year's program includes nine masterful, funny, and horrifying works from Ireland, USA, Mexico, Germany, France, and the U.K. There are some great films here, and I'd watch features from any one of these talented directors.

Normally, I'd say to look out for these films on the festival circuit, but... yeah. Anyway, you can read a little more on each short via the Fantasia website here.

A young man answers an online ad for some tech-meets-flesh fun only to discover that the robot has a fully developed personality. This fun comedy tackles what could be sleazy subject matter and instead infuses it with humanity, female agency, and laughs. This is the second time I've seen this film and it's still wonderful.

A family-friendly, brightly-lit tale of a woman and mom who vomits up plastic toy blocks and takes back some of her time. This was far more G-rated than I expected from Fantasia and this block, but well made nonetheless. Essentially, the film is a metaphor for the lopsided burdens mothers bear when rearing children; it can sicken you until you build walls and create boundaries as self-care.

A tale of a Bonnie and Clyde-esque post office-robbing couple that goes awry, as it always does. This short was directed with all the confidence of a seasoned director (though she only has two shorts under her belt), who likely grew up on gritty '70s crime films like Straw Dogs and Dog Day Afternoon. Ghrioghair is a talent to watch.

The director of the terrific The Old Woman Who Hid Her Fear Under The Stairs, which previously played Fantasia in this same block two years ago, is back with Snowflakes. We follow detainees at an immigrant detention center in the U.K. who are about to be deported to Jamaica when the guards start exploding into dust. Though this film is socio-political, the tone changes to slightly drug-up loopy when one of the deportees is given an experimental sedative. It's a bit of a bait-and-switch tone-wise, but the comeuppance is deserved.

Film realism intersects with real-life horror when a young Mexican woman is raped. Mexico is one of those countries that's quite patriarchal and so abuse and murder of women is rampant. When the woman's brother doesn't believe her, she turns to a coven of women sympathetic to her trauma for revenge. A horrifying and well-made film about the terrors that women face every day.

Horror works best when used as a metaphor, and those who say that horror can't, isn't, and shouldn't be political have never paid attention to both the world and the genre as a whole. This short is masterful in its socio-political metaphor of the awful monster, who can be found right at home. Caffery is another talent to watch.

This high-concept short feels like a proof of concept for a feature, and it's intriguing. A woman must walk only on a special dirt path, lest she disappear into a shadow world --- all while getting stared at, pleaded to, screamed at, and generally harangued by what are probably ghosts. I hope this one gets expanded to feature length or a series, because it feels original while raising questions about a mysterious other world. Well done.

In a dystopian future (or parallel), big people hunt a race of tiny people who live in the woods, for sport and for their whatever magical body elements help the big people medically. In this case, a dying elderly woman hires druggie mercenaries to hunt a tiny person so she can fix her lungs in a filthy hospital, but things don't go as planned. Ehrl could be directing Black Mirror episodes. Superb direction and production design.

They Salivate (France, 20 min.) Dir. Ariane Boukerche
The program closes out with a truly uncomfortable film in which a couple make out in close-up, then the woman unloads an insane amount of saliva into a glass. A party begins shortly after, and the woman puts the glass of spit onto a tray of glasses for guests. This visual tone poem evokes Shivers, an early Cronenberg film about sexuality as an epidemic, and becomes as beautiful as it is repelling.
Tweet Post Submit

Do you feel this content is inappropriate or infringes upon your rights? Click here to report it, or see our DMCA policy.
Born of WomanFantasia 2020shorts