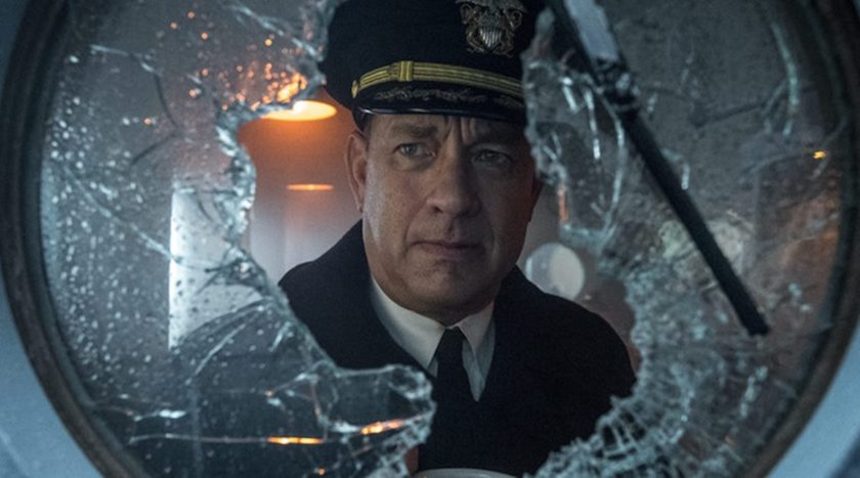 As of late, Tom Hanks has been semi-jokingly referred to as “America’s Dad,” partly for playing a seemingly endless series of benevolent paternal figures, but also for a long-running public persona that projects a combination of self-assurance, tranquility, and most importantly (pre- or post-pandemic), integrity, a character trait in relatively short supply over the last three-and-a-half years.

He’s leaned hard into playing authority figures, men in command who, despite the physical, emotional, and mental tolls they endure, remain steadfast in their belief in fundamental human virtues, ideals, and ideas, repeatedly stepping in to play military and non-military leaders alike (Sully, Captain Phillips, Saving Private Ryan, Apollo 13). It shouldn’t come as a surprise, then, that Hanks plays Ernest Krause, a first-time naval commander in Greyhound, Hanks’ adaptation of C. S. Forester’s (the Horatio Hornblower series) 1955 nautical/war novel, “The Good Shepherd,” attempting to make a perilous crossing of the North Atlantic during the early days of World War II to deliver much-needed supplies to the U.S.’s beleaguered British allies.

As Krause, Hanks gives another note-perfect master-class in acting. Hanks may not be our most versatile actor capable of disappearing into a role, but he’s certainly our most emotionally transparent and thus, our most emotionally open or available actor. Hanks' mastery of voice, inflection, and expression are unmatched by all but a few contemporaries.

He can turn a relatively simple, straightforward scene into revelatory drama, telling us practically everything we need to know about his character in just a handful of reaction shots, from the quietly subdued joy he feels at encountering Evelyn (Elisabeth Shue), his age-appropriate fiancee, in the opening scene, to the wave of disappointment and near despair when she rejects his proposal to marry before he leaves for his naval assignment on the other side of the continent, and finally to his recovery, as Krause deflects his emotional pain by telling Evelyn that she represents hearth and home, love and commitment. That we only see Evelyn again in a flashback during Krause’s worst moments does little to undermine the poignancy or potency of what would otherwise be considered a rote, routine scene.

When we next encounter Krause roughly two months later, he’s not just captaining his own destroyer, the USS Keeling (call sign “Greyhound”), he’s commanding an international convoy of 37 Allied ships across a portion of the North Atlantic nicknamed the “Black Pit” for its lack of air cover and the ubiquity of ship-hunting German submarines, U-boats (nicknamed the “Wolfpack”). Without air cover for the better part of three days, Krause and he convoy he leads must avoid deadly attacks by U-boats while minimizing the loss of lives and ships.

As a commander seeing wartime action for the first time, Krause must rely not only on years of training, education, and experience, but projecting an almost Zen-like sense of calm and resolve to the men under his leadership, most of whom are barely out of high school or college-age and look to Krause for guidance bordering on the paternal, though not necessarily paternalistic. Having so many young men under his command — they’re closer to the beginning of their lives than the end — only adds to the burdens Krause metaphorically carries on his shoulders.

Despite the WWII setting, Greyhound remains resolutely fixated on Krause, lingering in close-ups and medium shots, rarely leaving the confines of the bridge as Krause rattles off jargon-filled orders to his crew except during the brief moments when Krause emerges on the nearby deck to surveil the choppy waters for any signs of the German submarines or to visually orient himself — and by extension, the audience — among and between the other destroyers and merchant ships in the convoy.

Avoiding usual genre tropes, Greyhound never cuts away from Krause’s point-of-view, relegating the other ships, including German submarines, to long-distance shots or voices on the inter-ship radio. One of the U-boat captains periodically contacts Krause, hoping his taunts will rattle Krause into making an error in judgment. The unseen German captain’s voice helps to personify an otherwise abstract villain, unfortunately, made all the more abstract by an overreliance of inconsistent, under-rendered CGI.

Although it’s refracted through the point-of-view of a single character, Greyhound doesn’t stray far from genre conventions, unfolding as a super-suspenseful, tension-filled virtual game of cat-and-mouse (or hunter and the hunted) pitting the embodiment of American virtue in Krause against a ravenous, unseen, ultimately destructive enemy. It certainly makes the question of identification an easy one for audiences:

Between Hanks and his star power, an unambiguous war between liberal democracy and totalitarian fascism, the convoy’s exposure to the elements and attack from German submarines, our sympathies are — and ultimately remain — with Krause, his men, and the convoy. Necessary or not, Greyhound also serves as a reminder of why Hanks remains a beloved performer with audiences and a central figure in American pop culture.