Directed by Yoshinari Yoh, the new anime series from Trigger is now streaming on Netflix. 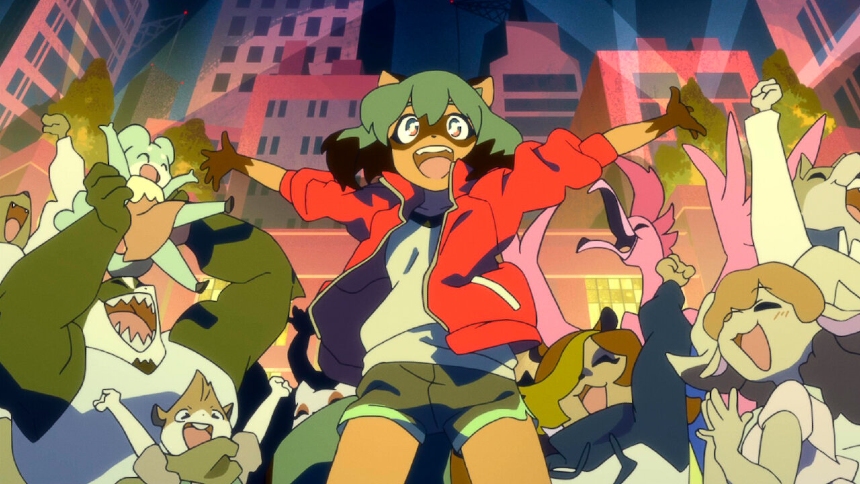 My first dip into the Summer 2020 anime season is cool and refreshing.

Known as beastkin, or beastmen (as spelled out in the English subtitles), they live in a world that is dominated by humans. They have found refuge in Anima-City, a robust, isolated metropolis dedicated entirely to their kind.

This is where tanuki beastkin Kagemori Michiru has sought refuge. Though she identifies as a racoon, she is different from everyone else; according to her, she is a human who suddenly transformed into a beastkin, without a beastskin's native ability to change the outward appearance from beast to human.

Michiru believes that she is alone in all the world, suffering from a rare and unknown disease that has transformed her into a racoon, but she soon learns that she is not, in fact, as alone as she thought, and that a much greater danger is threatening the future existence of Anima-City and all who live there.

Directed by Yoshinari Yoh, whose many credits as a key animator include Dead Leaves, FLCL, and Kill la Kill, the new anime series from Trigger is fresh and energetic, leaning heavily upon high-schooler Michiru's disarming comic perspective as a confused individual who is at the age where she is trying to figure out who -- and what -- she is. In the first episode, she encounters Ogami Shirou, a wolf beastman with powerful instincts to protect and serve the greater good.

They become an unwitting team of sorts, their paths continually crossing until Shirou accepts the inevitable and takes Michiru under his wing, so to speak, as he endeavors to unravel the great mystery that is afoot everywhere he looks, as he acts, mostly under the direction of Anima-City's mayor, Barbary Rose, herself someone with secrets she holds close to her vest.

Nimble and breezy, the series is very inviting to watch, introducing different, lively types of beastmen and showing how they have adapted to living in Anima-City, and also what potential dangers they face. The series gradually becomes more dramatic as it progresses and the fate of the city comes into question, with profound implications for mankind in general.

Without intending to do so, I watched all 12 episodes over the long holiday here in the US last weekend, shortly after it debuted worldwide on Netflix on June 30. It's an easy watch, and I think it would be equally effective without necessarily indulging in a binge- watch, but that option is certainly available if you're so inclined.