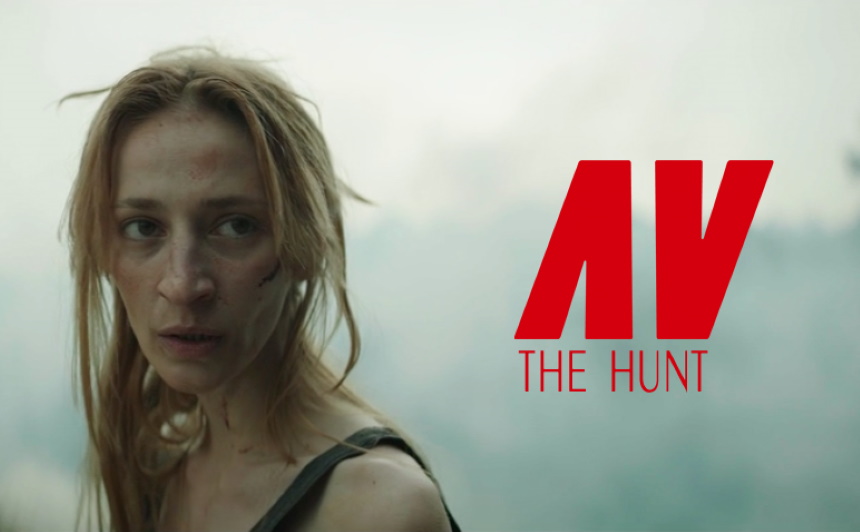 Celebrating its world premiere at this year's Neuchâtel International Film Festival is writer/director Emre Akay's Av: The Hunt, a chilling indictment of archaic Turkish patriarchal violence in the form of a blisteringly paced survival thriller. While the film borrows plenty of familiar beats and set-ups from better known genre classics, it still manages to set its audience on edge as the characters hurtle toward the unknown, utilizing these tactics as a way to highlight a major issue in the Central Asian nation's more rural corners.

Opening in a dingy apartment, we find our heroine, Ayse (Billur Melis Koç) in the middle of a ravenously passionate tryst when a knock on the door interrupts the lovers abruptly. From the look on their eyes, it quickly becomes clear that they both have something to fear, but it's hard to put a finger on exactly what the problem is before an unusually aggressive cop bursts in and everything goes haywire. When Ayse, who had been shaking with fear while hiding on a balcony, realizes that her lover has been killed by the police, she has to get out of there or she'll be next.

When Ayse first starts to run, we still aren't quite sure what she's running from, but a deftly executed exposition dump lets us know that she had been cheating on her husband, and that her family was none to pleased with her actions. The only solution in their eyes was that she must be dealt the ultimate punishment to cleanse her family's honor. And so she runs.

Starting from the Turkish hinterlands, Ayse is determined to get to Istanbul, the political and cultural capital of the country, hoping to take refuge somewhere a bit more progressive than her rural home, but it won't be easy. Before long she is being tracked like an animal through the woods by several male family members, intent on making her pay for the damage she'd done to their honor, but she won't go down that easy.

Av: The Hunt (redundantly titled since "Av" means "the hunt" in Turkish) is not an easy film to get through, but it is a significant one in that it does illustrate a genuine issue plaguing certain parts of Turkey today. Structured somewhere between a survival horror and a rape/revenge film, it finds its truest scares in the realest places.

The men chasing Ayse vary in their levels of commitment to the cleansing, but they are all complicit in terrorizing her every step of the way. The leader, Sedat (Ahmet Rifat Sungar), is the most sadistic of all, constantly hurling violently sexual epithets not only at his prey, but also at his hunting partners when he finds their conviction lacking. With Sedat threatening to violate not only Ayse, but also the spleens, asses, and mothers of his own partners, it's painfully clear just how unhinged he is, as well as making it obvious why Ayse must get away.

Billur Melis Koç does the vast majority of the heavy lifting in Av: The Hunt, similar to the way Matilda Lutz anchored Coralie Fargeat's Revenge a few years back, and the films attack very similar themes from different angles. They are both about the possession of female bodies by men in ways that haven't been previously explored on film. With Revenge, a woman who was meant to seem as little more than a plaything must take revenge when her attackers throw her away like garbage. In Av: The Hunt, Ayse's agency is completely sacrificed to her husband, whom she'd tried to leave, but customs wouldn't allow it. Her revenge is almost incidental, she just wants to be free, but in order to do so, she is forced to destroy those who seek to hold her sexuality hostage.

Debut feature director Akay presents a well realized vision that manages to not only thrill audiences, but also presents a real social issue without sacrificing storytelling. Well paced at a little under 90 minutes, and effectively shot, scored, and acted, Av: The Hunt is both rousing and upsetting, a feat that bodes well for the futures of everyone involved here. A film created in the exploitation mold that doesn't feel exploitative is a rarity these days, and more and more frequently this type of film falls victim to lack of foresight in capturing the zeitgeist. However, Av: The Hunt is prescient, violent, thrilling, and thought-provoking in the same way that Tigers Are Not Afraid was when it shocked the genre film world a few years back. This is definitely a film and filmmaker to look out for, highly recommended.

More about AV: The Hunt