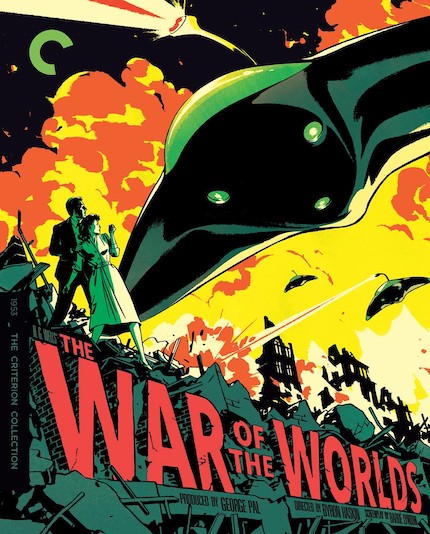 Out this week from the Criterion Collection comes the 1953 adaptation of the famous H.G. Wells tale, The War of the Worlds, directed by Byron Haskin (The Naked Jungle, The Outer Limits) and produced by George Pal (Houdini, The Time Machine), AP Frank Freeman, Jr. (The Naked Jungle, Conquest of Space), and the uncredited EP, Cecil B. DeMille (Sunset Boulevard, The Ten Commandments).

Haskin was primarily known as a cinematographer and for his special effects work before he became a full-fledged director, and Pal was an animator, director, and cinematographer. (Lots of alpha creatives on board for this adaptation. They continued to all work together, but there was friction, as is with most productions.)

As you can guess, The War of the Worlds is a highly influential film on many filmmakers, notably on Stephen Spielberg and George Lucas. (Check out the back lighting, blocking, and shadow work.)

Within the film, a meteor crashes in the California countryside; it's so American that a few men wonder on how to profit from the event. Anyhow, within a short amount of time, the townsfolk and the resulting military are vaporized by predatory spaceships that inexplicably emerge from the meteor.

We follow scientists Dr. Clayton Forrester played by Gene Barry (Burke's Law, The 27th Day) and Sylvia Van Buren (Ann Robinson --- The Story of Molly X, Imitation of Life) as they try to unravel why aliens have landed and are destroying Los Angeles. (Both actors had small roles in Spielberg's 2005 adaptation starring Tom Cruise.)

For socio-political reasons, it's worth noting that Sylvia has had to take a librarian role and is relagated to serving coffee to the troops and screaming a lot, because in 1953, women working while the men were away during WWII were pushed out of plum jobs.

Also because of the era in which it was produced, The War of the Worlds is very talky and hokey at times, but in the end, it's effectively a sci-fi spectacle that can be watched and absorbed with awe. There isn't much more to the plot than aliens making people and buildings disappear and Clayton's search for the missing Sylvia --- until the aliens die because our atmosphere is inhospitable to them. But that doesn't make the film unenjoyable --- it's great blockbuster fun, especially for the early '50s, when I imagine that this film could have really scared a good deal of the population.

The new 4K restoration is superb. I've never seen this film so clear and vivid --- the rich Technicolor hues positively jump off the screen; it's visual eye candy. Likewise, the sound is crisp and unmuddied. This release is absolutely goregeous.

I haven't checked out the audio commentary ported over from 2005 from filmmaker Joe Dante, film historian Bob Burns, and author Bill Warren, but I'm willing to bet that it's informative, fun, and filled with joyous exclamations and anecdotes. I imagine that a certain child-like glee comes out here as they re-live a magical and influential childhood favorite.

I did, however, especially enjoy the featurette revealing how the film was restored, as well as the supplement showcasing the "Movie Archaeologists," wherein sound designer Ben Burtt and film historian Craig Barron painstakingly recreate sound effects as well as a miniature set in which an alien spacecraft crashes into a Downtown LA building. It looks astonishing --- so much so that my untrained eyes cannot tell the difference between the recreation and the actual film.

To read more on The War of the Worlds and/or add it to your home film collection, head over to Criterion's page for this release here.