Review: YOU DON'T NOMI, A Look Into Camp Obsession SHOWGIRLS 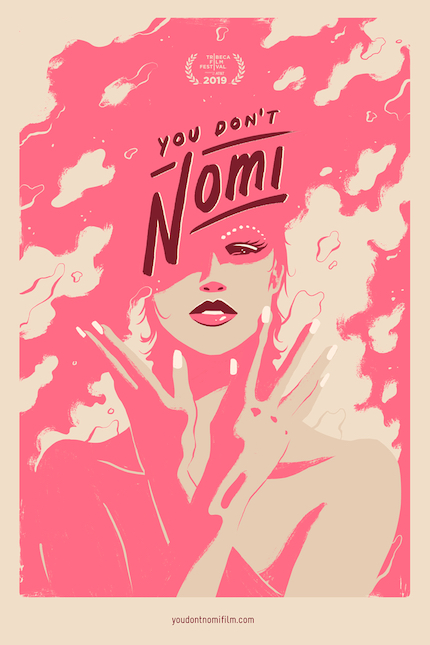 A selection of last year's film festivals such as Tribeca, Fantastic Fest, Sidewalk, Outfest, Stiges, Bifan, You Don't Nomi is the first documentary by Jeffrey McHale, who wrote, directed, and produced. It's streaming today, so why not have a fun double feature of craziness and camp?

As you may have heard by now, You Don't Nomi is based on the history of the troubled reception of the 1995 "trashterpiece," Showgirls. That 2-hour-plus opus of can't-look-away ridiculousness was helmed by titan Paul Verhoeven (RoboCop, Total Recall, Elle, Basic Instinct). He'd teamed up again with highly paid screenwriter Joe Eszterhas to create an over-the-top indictment of the meat market that is Las Vegas' show scene.

It's a strange movie to watch if you're a feminist... but honestly, it's a strange movie to watch at all. There's so much extreme misogyny on display, but on the flip side of the coin, the women on display (at least the lead and supporting actresses) are fierce as hell. They're survivors of a cutthroat industry, of dehumanization, of the patriarchy, of rape, and in Nomi's case, the murder-suicide of her mother and father.

In Showgirls, Nomi (a young Elizabeth Berkley) hitchikes her way to Las Vegas and her suitcase is immediately stolen. However, she's got a magic touch with most other people that become strangely enamored of her. It's not long before she's got a place to stay, a job, and a career trajectory that a lot of wannabe starlet-dancers would kill for.

Even though her personality is akin to a hypersensitive human switchblade, Nomi gets far, making friends with helpful locals and seducing pretty much everyone she comes in contact with -- especially Vegas show producer Zack (MacLachlan) and show lead Cristal (Gershon). After a fight to the top of the Vegas, Nomi stars in her own elaborate production, "Goddess," and decides to leave Vegas for Los Angeles. No doubt, the nutty exploits continued in Tinsel Town; I'd have loved to have seen the sequel, but no one was interested in it after the film's mostly terrible reception.

So -- what exactly IS Showgirls? Cult camp classic? Total trash? You Don't Nomi explores the critical history of the films by quoting its critics after its initial theatrical release. Although both Berkley and Gershon continued to work steadily, there's no doubt that their careers were notably affected. By contrast, MacLachlan (who was recently made a star from David Lynch and Mark Frost's Twin Peaks) continued to get highly visible lead and supporting roles in popular series like Sex and the City, Desperate Housewives, the Twin Peaks revival, and Portlandia.

You Don't Nomi seeks answers to the previous questions of what it is and what it was intended to be, in McHale's recollections of speaking directly with Verhoeven, as well as passages from critic Adam Nayman, author of the book It Doesn't Suck: Showgirls, and from poet Jeffery Conway's Showgirls: The Movie in Sestinas.

The doc uses the usual clips-and-commentary technique, with interstitials of Showgirls scenes stitched into some of Verhoeven's other films in strange ways. For example, we see Nomi dancing onscreen in the RoboCop police tech/exam/experimention room with scientists working tests on Peter Weller's RoboCop. I'm not sure exactly how successful this technique is, but it's an eye-catching, polished way to show visuals and connect Verhoeven's catalog.

More interesting is the human element to Showgirls within You Don't Nomi; the feature's barely hidden queer subtext (is it hidden at all??) have elevated the movie to supreme camp and cult status within the LGBTQ community. It's telling that people from this group must often leave hostile homes and reinvent themselves in order to survive, psychologically -- and McHale relates the film's popularity to the community in exadctly this way.

Popular drag queen Peaches Christ staged a series of raucous "midnight mass" stage revivals in San Francisco -- and although not in drag for the event, was part of the all-female 2019 drunken stage reading of Scripts Gone Wild at Fantastic Fest 2019, along with readers Gigi Saul Guerrero, Mattie Do, and yours truly (among others).

Then there's the story of actor April Kidwell, who played Nomi in the off-Broadway play, "Showgirls the Musical." She recounts the terrible trauma of being drugged and raped, then having destructive PTSD and depression that she was unable to work or even speak. It was through her discovery and subsequent love of Showgirls and the take-no-shit character of Nomi that Kidwell was able to start performing again and has resumed a joyous, healthy life and career.

Now THAT is the transformative magic of cinema. Love or hate Showgirls, there's no denying that the film immensely helped someone who really needed a light in the darkness. Besides, the film is just fun, and if you don't feel that way yet, You Don't Nomi wants to help you get there.

The film is available to watch via various Video On Demand platforms as of Tuesday, June 9, 2020. Visit the official site for more information.

Do you feel this content is inappropriate or infringes upon your rights? Click here to report it, or see our DMCA policy.
Elizabeth BerkleyGina GershonJoe EszterhasKyle MacLachlanPaul VerhoevenShowgirls

More about You Don't Nomi