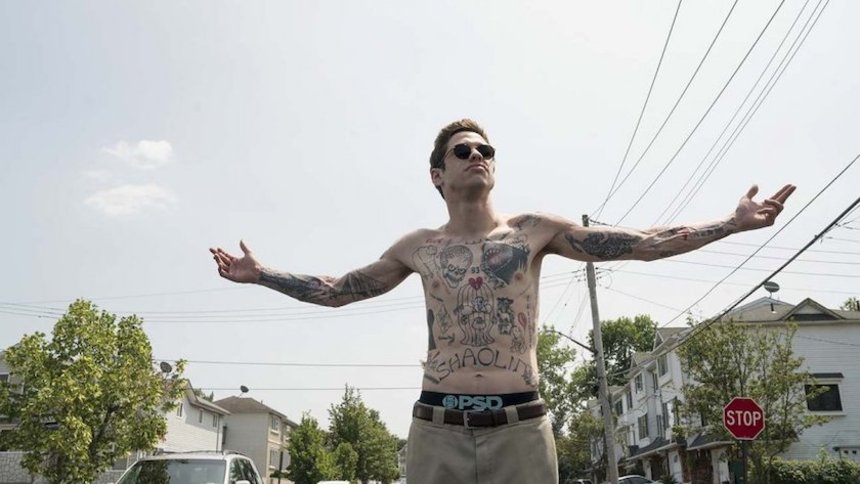 Known less for his multi-year stint on Saturday Night Live (SNL) or his occasional forays into film (last year’s underseen Big Time Adolescence) and more for his offscreen personal life (brief relationships with Ariana Grande and Kate Beckinsale) and mental health issues, actor-comedian Pete Davidson makes the jump to big-screen lead with The King of Staten Island, a loosely structured, fitfully funny character study co-written and directed by Judd Apatow (Funny People, The 40-Year-Old Virgin, Knocked Up), an American filmmaker who has deliberately centered his films on emotionally stunted, borderline losers of the Caucasian kind and their gradual evolution into Apatow’s limited, nearsighted vision of masculinity and men who find ultimate fulfillment in consciously and wholeheartedly embracing the Platonic ideal of heterosexual, romantic relationships: monogamous domesticity.

It’s a one-size-fits-all formula that thankfully doesn’t limit Davidson or the deeply troubled, maladjusted twenty-six-year-old, Scott Carlin, he plays in The King of Staten Island. The Scott we meet in the opening scene flirts with committing vehicular suicide, relenting only in the final seconds before the point of no return. While Scott falls into the classic case of arrested development, refusing to leave home, getting a job, or otherwise getting a life, Davidson and Apatow situate Scott’s anti-social behavior in his father’s premature death.

Like Davidson, Scott lost his father in a fire (a hotel fire here, not 9/11 like Davidson's father) at the age of seven, leaving him irrevocably traumatized, numbing his grief with Herculean amounts of weed, hanging out with his age-appropriate, multi-ethnic loser friends, Oscar (Ricky Velez), Richie (Lou Wilson), and Igor (Moises Arias), in his basement, and occasionally exchanging bodily fluids with a childhood friend, Kelsey (Bel Powley, hitting her New Yawk accent hard), and otherwise annoying his younger, college-bound sister, Claire (Maude Apatow, well-cast despite the obvious nepotism involved), and his superhumanly patient mother, Margie (Marisa Tomei, underused).

While Claire begins the next stage of her life, moving out to a nearby college, and Margie continues to coddle Scott (Margie works as a nurse, in case additional signposting of her nurturing nature is needed), Scott remains unmoved and unchanged. A key event, however, conspires to force change on a willfully stubborn Scott.

Due to Scott’s random, inconsiderate behavior (tattooing a nine-year-old), Margie meets Ray Bishop (Bill Burr), a single, middle-aged firefighter who understandably takes a shine to Margie. Scott reacts like any wounded man-child with an Oedipal complex would when his support network begins to erode: He does everything humanly possible to destroy Margie and Ray’s burgeoning relationship. In Scott’s mind, Ray’s status as a firefighter like his father functions as a double insult, replacing his father in his mother’s bed and replacing his father as a romanticized, idealized, masculine figure (more Superman than Man).

Scott’s journey, however, doesn’t end there. It’s just beginning. After a semi-contrived set of circumstances leaves him homeless and Ray’s relationship with Margie temporarily on pause, he’s forced to beg Ray for a place to sleep (i.e., the firehouse). Given the near-saintly rep of Scott’s father, Scott finds himself treated practically as a rookie firefighter (all of the heavy-handed pranks and off-color jokes, none of the actual, life-threatening firefighting). Surprisingly, Apatow uncritically embraces the hetero, male-centered, firefighting lifestyle depicted in The King of Staten Island, the wearingly constant insults and putdowns meant to deflect emotional engagement, the condescending, dismissive attitude towards civilians and other non-first responders, the rigid, inflexible hierarchy that treats self-sacrifice as synonymous with heroism and anything else as less than manly or masculine.

Apatow might have a few weaknesses as a director (e.g., pacing/length issues redolent of self- and over-indulgence, a limited, reactionary worldview, etc.), but he’s always been an actor’s director, eagerly allowing his actors to develop well-rounded, multi-dimensional characters onscreen. He’s always been finely attuned to a particular performer’s strengths too (Seth Rogen in Knocked Up, Steve Carrell in The 40-Year-Old Virgin, Adam Sandler in Funny People), a skill that’s all too often overlooked.

Here, he leans heavily into Davidson’s physically awkward, nervous energy, mixing moments of self-deprecation and self-awareness with moments of sheer terror and panic, Scott doesn’t so much go on a journey of self-discovery and self-knowledge as much as get thrown onto the path of an oncoming, out-of-control firetruck. He either has to go under, through, or around, but whatever he decides, living in a state of suspended animation isn’t an option anymore.

The film is available on a variety of Video On Demand platforms as of Friday, June 9, 2020. Visit the official site for more information.

Do you feel this content is inappropriate or infringes upon your rights? Click here to report it, or see our DMCA policy.
Bel PowleyBill BurrJudd ApatowMarisa TomeiPete DavidsonSteve Buscemi