Hot Docs 2020 Review: THE WALRUS AND THE WHISTLEBLOWER, Attachment and Amusement 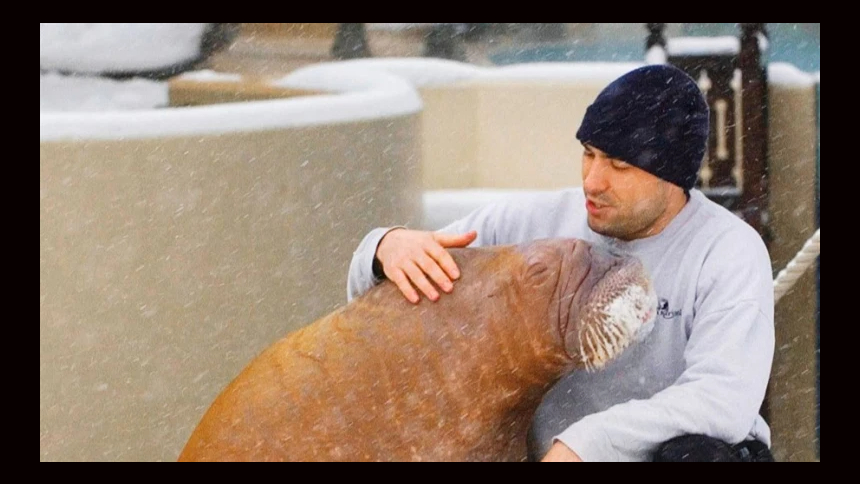 I doubt there is any Ontarian of a certain age who couldn't sing you the jingle for Marineland. The commercial was in regular rotation when I was growing up in Toronto: images of whales, walrus, deer, and other wildlife and amusements waiting just a short drive down the highway in Niagara Falls, a place already teeming with tourist traps. My family only visited once, and I always thought it was strange that they would get these wild animals to do these very unnatural stunts and tricks, so far from their natural habitats.

As we would all learn in the past decade, indeed, these were very unnatural things for the animals to do, and the animals were trained via severe abuse. Through the 2010s, many activists worked towards exposing these abuses, not just at Marineland, but at similar parks around the world. But for one local, the fight was personal, and he became the centre of storm, willing to risk his career and financial stability, as well as his emotional and mental health, for what he thought was right.

The Walrus and The Whistleblower won the Audience Award at the Hot Docs Film Festival, and it's easy to see why. Nathalie Bibeau's feature documentary debut looks at the story fo Phil Demers, former animal trainer. During his time at marineland, the walrus Smooshie imprinted on the him, and Demers in turn became strongly attached to the creature. Bibeau expands this individual story to look at the wider picture of our love and use of animals, Demers and others' fight with Marineland, and how we, as a society, look on animals that are forced to entertain us.

Certainly the saga of Demers' fight with Marineland is fascinating; how he became a trainer, what he and others were expected to do, the culture in the workplace, and what was finally the breaking point. Many companies (if not most) take advantage of employees who not only just need the work, but love their jobs that they're willing to work under bad conditions. But it's one thing to have bad conditions for yourself, it's another to witness the abuse of animals. Bibeau allows the space for Demers and the other workers to tell their stories in their own time, balancing with the relevant factual information to piece the story together.

The story has a strong 'David and Goliath' theme. Marineland barely tries to deny or hide their abuse of animals, opting instead to try to make it all disappear by suing everyone who dares speak against them (the suit against Demers was for over one million dollars, hardly an amount one is likely to get from a part-time mail carrier). Bibeau is a deft hand at the documentary formula, moving between talking heads, archival footage, and contemporary news footage and private moments between Demers and his wife (herself a former Marineland trainer who was also sued). This is as much about Demers is it is about Smooshie and the other animals, the how and why of becoming an activist, and the sheer exhaustion of it when you have to fight against someone who might be entirely in the wrong, but they have all the money (and therefore power) behind them.

Anthropomorphism is an intersting phenomenon; on the one hand, we've learned, through scientific research and our own encouters especially with mammals, that animals do indeed have emotional lives and personalites (ask anyone with cats and dogs). And no doubt that people like Demers who work with animals on a daily basis, form deep and lasting attachements. Yet animal advocates have been fighting for years against animal abuse in circuses, and Marineland had been operating for half a century before it took Demers and his colleagues speaking out before anything changed (if it did). Why, on the one hand, do people care about and laud animals, and on the other hand, turn a blind eye to their abuse?

As the film concludes, it notes that Marineland is (somehow) still operating, a bittersweet conclusion for those who might have hoped for better. But The Walrus and the Whistleblower is more about the journey; understanding what lengths people will go to, to save their nefarious business, to save others, to save and protect animals.

The Walrus and the Whistleblower (Trailer) A film by Nathalie Bibeau from Bunbury Films on Vimeo.

Crowd Fund This: Help Build INSIDE and Black Mansion Films