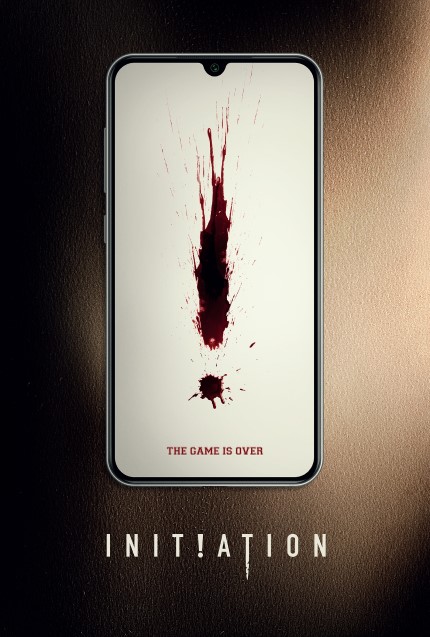 The poster doesn't give anything away, or tell us anything about the movie, really, except that is it very promising, so to speak. To be more official, here is the official synopsis from the official release, just handed to me by my email account (no names, please):

"Teen horror is back with a vengeance in this edgy slasher about a cruel social media game that spins out of control. Whiton University unravels the night a star-athlete is murdered in the wake of a buried assault allegation, kicking off a spree of social media-linked slayings. As a masked killer targets students across campus, a trio of sorority sisters race to uncover the truth behind the school's hidden secrets -- and the horrifying meaning of an exclamation point - before they become the killer's next victims."

As a longtime proofreader and copy editor, I can attest to the horrifying, indeed, terrifying properties of an exclamation point, so I appreciate that particular aspect of the synopsis. Well, then, who stars in the movie, who directed, and so forth? Please tell us, official release:

First, it was originally titled something else.

"Selected for a world premiere in the Midnighters section at SXSW under its original title Dembanger, the horror crime-thriller stars Lochlyn Munro (The Predator, Riverdale), Isabella Gomez (One Day at a Time), Jon Huertas (This is Us), Froy Gutierrez (Teen Wolf), Bart Johnson (High School Musical), and Yancy Butler (Kick-Ass, Drop Zone).

"Inspired by his short film Dembanger, about the perils of posting on social media, Berardo penned the script alongside fellow USC SCA and UCLA TFT alumni Brian Frager and Lindsay LaVanchy. "

Now, one more thing I need to mention:

Full disclosure: XYZ Films is introducing Initiation to international distributors during the Cannes virtual market. Todd Brown, who is this site's founder and editor, serves as Head of International Acquisitions for XYZ Films. Todd Brown was not involved in the writing or editing of this article. Occasionally, however, he answers my emails, briefly, though he did not email me about this particular item.

Based on the film's description and the cast, I'm hoping that Initiation will prove to be as good as it sounds, and that we can all see the film sooner rather than later.

Do you feel this content is inappropriate or infringes upon your rights? Click here to report it, or see our DMCA policy.
John BerardoJon HuertasLochlyn MunroRiverdaleIsabella GomezXYZ FilmsYancy Butler