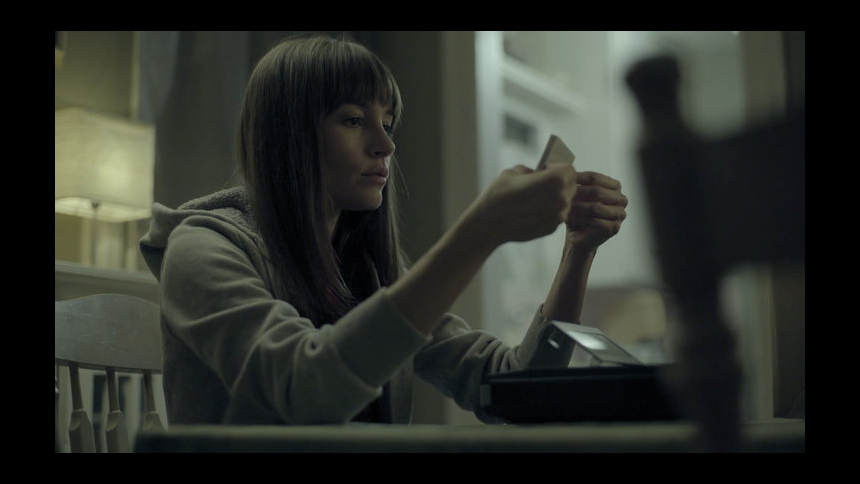 Anthony Scott Burns, known for Father's Day (pictured above), his profoundly creepy contribution to the anthology film Holidays, as well as short films like Manifold, will soon see his upcoming sci-fi thriller Come True gain a wider audience. How do I know this?

And, yes, that's a lot of rights -- and I should note here that Todd Brown, this site's founder and editor, is Head of International Acquisitions for XYZ Films, though he was not involved in the writing, editing, or researching of this article -- but the takeaway here is that Anthony Scott Burns' next film is on its way.

Burns has built a glowing reputation among those who know his work -- see our past stories about the writer/director and his films -- and Come True looks to be quite nightmarish in its potential.

Come True stars Julia Sarah Stone (The Killing) as Sarah, described officially "as a rebellious teenager who is tormented by dark dreams and finds shelter at a university sleep study. Hoping this will finally help her to get rid of her nightmares, Sarah unwittingly becomes the channel to a horrifying new discovery." Landon Liboiron (Truth Or Dare) also stars.

Before all the germs started flying around and killing people worldwide, Come True had been aiming for a world premiere at a film festival in the fall. We'll have to wait to see when all our hopeful good wishes and/or horrible nightmares about Come True ... er ... come true and we can lay out eyes upon it for ourselves. Until then, maybe don't take a nap during the daytime so you can sleep through the night.