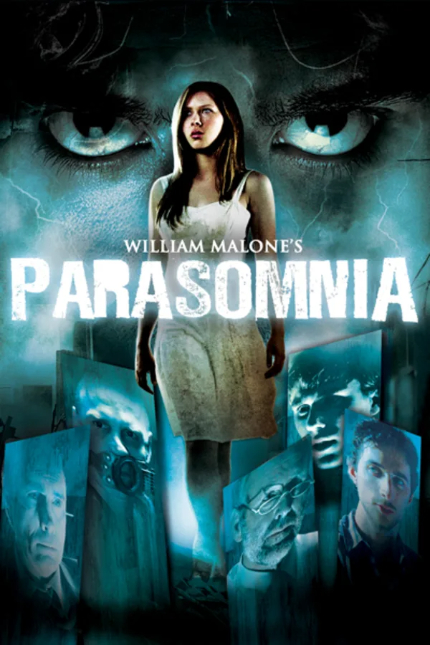 Visiting a friend who is completing rehab in a medical facility, art student and record-store worker Danny Sloane spies a beautiful young woman named Laura Baxter, sleeping her life away. Her doctor informs Danny that Laura is suffering from a rare condition known as parasomnia, also known as Sleeping Beauty syndrome.

Since infancy, Laura has only awakened a few brief times. We get a brief peek at her dreams, which are disturbing, even in view of the blocky 2008-era graphics.

Because his girlfriend recently broke up with him, and Danny is attracted to her physical appearance and her strange affliction, Danny is drawn into her life, which may be a deadly thing to do.

Frankly, I've only been able to watch the first 15 minutes of the film, due to internet connectivity issues that are bedeviling me today, but I've seen enough to want to finish watching it as soon as possible.

Before today, I don't believe I even knew of this film's existence, but here's what Nathaniel Thompson wrote at his great site Mondo Digital:

"A real treat for horror fans yearning for some vivid surrealism and a melancholy romantic streak along with their gory mayhem, Parasomnia is such a solid piece of work one can only wonder why it took two years to come out in the United States -- straight to video, no less -- while far lesser fare regularly makes it into theaters." Mr. Thompson places the career of director William Malone, who previously directed the awful House on Haunted Hill remake and the even more awful Feardotcom, into a fair perspective.

Mr. Thompson's review is what made me want to see the movie, described by Shudder thusly: "A childhood accident victim, Laura Baxter is actually sleeping her life away, awakening briefly on rare occasions. Art student Danny Sloan falls in love with her, unaware that her hospital neighbor, a terrifying mass murderer and mesmerist has other, more sinister plans."

Also, Wes Craven is quoted in the trailer, so that's probably a good thing.

Do you feel this content is inappropriate or infringes upon your rights? Click here to report it, or see our DMCA policy.
Dylan McKnightPatrick KilpatrickSean YoungShudderWilliam Malone