Crowdfund This: WORST CASE SCENARIO Gets Made - As A Graphic Novel 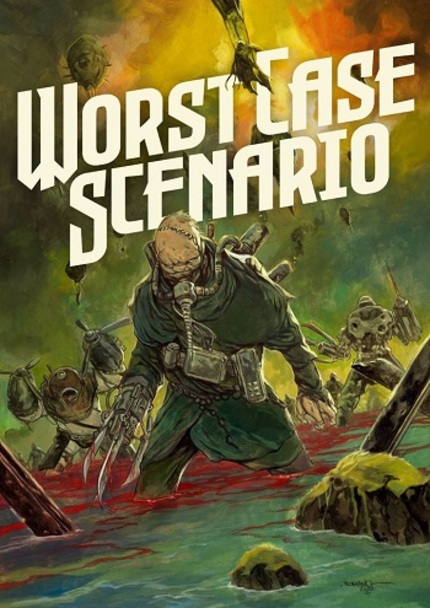 All the way back in 2002, a clip appeared on the Internet which showed a trailer for what appeared to be an outrageous zombie spectacle. In it, you saw a beach being stormed by an army of fearsome creatures, parts stitched corpses, parts robots, all Nazi. The clip was called Worst Case Scenario, and was meant to be a proof-of-concept for an upcoming film, to be directed by Richard Raaphorst. A few years later, he made a second clip, which showed another Nazi zombie army drifting into the Netherlands, now as a flotilla of hot air balloons.

Both clips showed off a tremendous amount of creativity, designs, and vision. They got millions of views, and the Worst Case Scenario film was awaited with much anticipation. Unfortunately, the production got stuck in Development Hell and died a quiet death. Director Richard Raaphorst managed to salvage some of the ideas for his film Frankenstein's Army, and Nazi zombies became fashionable in several other films. But the original dream sort of lingered on in limbo... 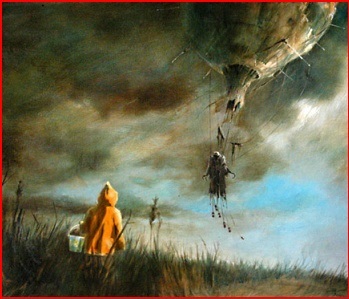 ...until now. Richard Raaphorst doesn't just direct and design, he is also a very good illustrator. And he wants to resurrect Worst Case Scenario as a graphic novel. Collaborator Eron Sheean will write the dialogue, Brian Yuzna will write an introduction, and Dutch comic book illustrator Romano Molenaar has created the cover, seen above.

The balloon clip is the story he currently wants to revive, with two other stories being eyed if this one is successfully crowdfunded. The Kickstarter campaign kicks off today, and there are some fun pledges to be had already, including a personalised portrait of you as a zombie. Frankly, I cannot wait to see the end result.

So go to the Kickstarter webpage, check the rewards, and CROWDFUND THIS!