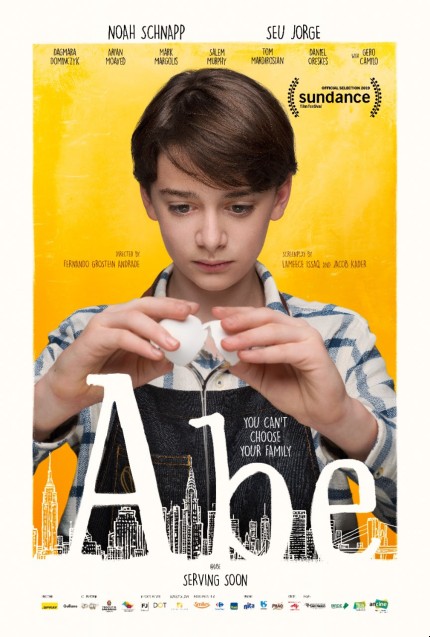 First impressions can be deceiving.

A blitzkrieg of images initially suggests that Abe, directed by Fernando Grostein Andrade, will chronicle the social-media exploits of its titular character, ably brought to life by Noah Schnapp (Stranger Things), as he comes of age in the modern world of technology as the son of parents divided by religious differences.

But that's almost entirely wrong. First, Abe makes clear that he is preoccupied with cooking, rather than religion, and has little to no interest with social media, except to chronicle his growing interest in food preparation. And his loving parents, Arian Moayed (a smug investor in Succession) and Dagmara Dominczyk (a PR expert in Succession), are atheists, though they themselves were raised by faithful Muslim and Jewish parents.

It's the families who bicker about their differences over the dinner table as they celebrate Abe's 11th birthday. Abe, for his part, is content to concentrate on the food. His interests lead him to sneak out of the family's townhome into the wilds of Brooklyn to track down Chico (Seu Jorge, City of God), a chef who offers a mixture of meals from different countries at his neighborhood pop-up food stand.

Abe is so impressed by what he tastes that, when his parents decide to send him to camp for the summer, he sneaks away from the class -- 'I already know all that stuff,' he surmises -- and visits Chico and his crew in their kitchen. Abe's persistence and raw abilities eventually land him an unpaid position, which he eagerly embarks upon, while still keeping it all a secret from his parents.

Frankly, I was afraid that this familiar gambit -- secrets like this are always discovered, scuppering any good intentions at the most obvious moment -- would undermine the good will that Abe's genuine charm and surprise of discovery builds up throughout the story. Yet the film is not through offering surprises, in this case taking a more dramatic turn that feels entirely earned, thanks to the characterizations that have been steadily established.

Dagmara Dominczyk and Arian Moayed deftly handle the loving oversight of their son, as well as the increasingly ariminous discussions with their family members. Bear in mind that events are often presented from Abe's viewpoint, so he doesn't necessarily know everything that they know, but he has enough information, he thinks, to make his own conclusions. The family is rounded out with seasoned performers -- including Mark Margolis (Better Call Saul) and Tom Mardirosian (Bosch) -- who make their loving concern evident, even as, again, they become consumed with their own longheld and deeply rooted differences, time and time again.

As a film that appears to have been aimed at a younger audience, Abe is uncommonly kind and mature. Director Fernando Grostein Andrade, working from a screenplay credited to Lameece Issaq and Jacob Kade, and a story by himself, Thomaz Souto Correa, Lameece Issaq, Jacob Kader, and Christopher Vogler, delivers a good-hearted experience that never condescends when it talks about food or religion or life, itself.

Summing up: Dare I say ... uplifting? Especially if you enjoy good food and good company while you devour it.

Abe will be available to watch on Demand and on Digital as of Friday, March 17, 2020. Pre-order on iTunes and Apple TV. For more information about the film, visit the official site

Do you feel this content is inappropriate or infringes upon your rights? Click here to report it, or see our DMCA policy.
Arian MoayedBrazilDagmara DominczykFernando Grostein AndradeNoah SchnappSeu JorgeUS