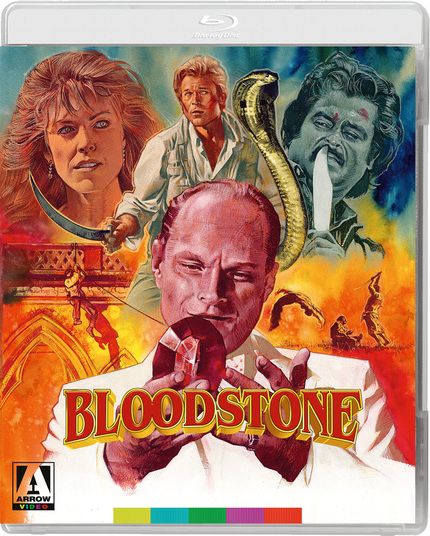 It's been a long time coming, but Bloodstone, Tamil Superstar Rajinikanth's only English language film, is finally arriving on special edition Blu-ray from Arrow Video. Co-written and produced by cult and exploitation icon Nico Mastorakis (Island of Death, Hired to Kill, The Zero Boys) and directed by Dwight Little (Getting Even, Rapid Fire, Halloween 4), Bloodstone is the story of a honeymooning couple in India played by Brett Stimely and Anna Nicholas, who stumble into the adventure of a lifetime when they cross paths with an international jewel thief. Stepping in as their unlikely partner and guide is Shyam Babu, played by Rajinikanth, a taxi driver with more than a few surprises up his sleeve.

Arrow Video have given us the first look at their brand new kick-ass trailer, as well as the newly commissioned artwork and tech specs (you might see a familiar name among the contributors). Check out your first taste of this raucous adventure and prepare to begin your hunt for the magnificent Bloodstone!

A man of action who can fight with the best of them and a cab driver who would give the Transporter a run for his money, pair up to save a young girl from the clutches of an evil criminal magnate in the exciting adventure thrill-ride Bloodstone!

The Bloodstone, a priceless stolen ruby, accidentally ends up in the possession of American newlyweds Sandy (Brett Stimely, Cannibal Women in the Avocado Jungle of Death) and Stephanie (Anna Nicholas, Remington Steele). Now, their honeymoon in India is interrupted as they become the target of international fence Van Hoeven (Christopher Neame, The Prestige) and his evil henchmen. When Van Hoeven kidnaps Stephanie and ransoms her for the jewel, Sandy joins forces with cabby and dormant stunt-driver Shyam Sabu (Rajinikanth, 2.0) to rescue his young bride.

Co-written and produced by genre film luminary Nico Mastorakis (Island of Death, The Wind) and featuring a stellar performance by legendary Tamil superstar Rajinikanth in his first English-language role, Bloodstone is an action-packed romp full of thrills, kick-ass one liners and venomous cobras!

- Optional English subtitles for the deaf and hard of hearing