Directed by Malik Nejer, the animated film hails from Saudia Arabia and is now on Netflix. 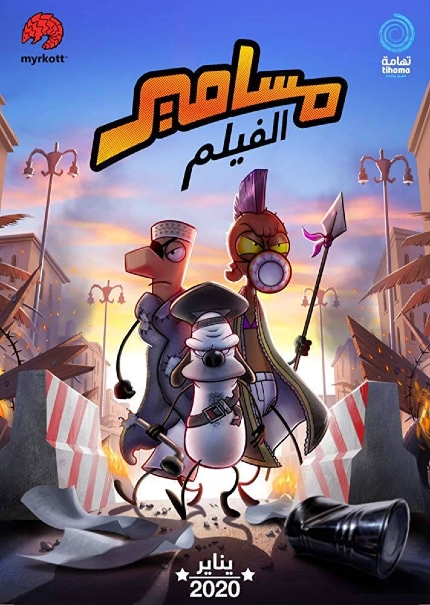 Based on a popular YouTube series from Saudi Arabia -- sample episode embedded below; be sure to enable English-language subtitles as needed -- Masameer the Movie reflects the common challenges of adaptation.

Presented in its original Arabic-language version on Netflix (with subtitles in various languages available), the feature-film adaptation is continually fascinating, especially for fans of international animated films, and it's always diverting and pleasant. All four protagonists are introduced in trying circumstances, so it's how they deal with those challenges that prove endearing.

Longtime friends Saad, Saltooh and Kalb find themselves out on the curb (literally) after the abandoned cafeteria where they have been squatting is condemned and promptly turned into a public toilet (?!). The friends bemoan their fate, worry about the times ahead, and struggle to figure out what, if anything, they can do about it.

Meanwhile, young scientist Dana is employed at a large firm where she develops a robot with (quite limited) Artificial Intelligence. Unfortunately, the robot makes an explosive mistake that leaves Dana out of a job and questioning her future, especially because she only wants to do good in the world.

Then along comes a public meeting of a group of so-called superheroes, who announce that they will welcome new members. Soon, Dana (and her robot), meet up with Saad, Saltooh, and Kalb, at the event. None of them are accepted into the superhero group, but why can't they form their own group?

For the most part, the humor is gentle and stays as far away as possible from anything that might be considered offensive. The pace is often slack, especially in comparison with the buzzing, modern animated movies from big production studios. And some of the cultural references definitely flew right past me.

Even so, the generally low-key stakes ramp up to a surprising level, and the likability of the lead characters keeps the narrative perking.

Summing up: Always diverting and pleasant, at its best, Masameer the Movie is delightfully clever and amusing.