Andrew Mack
Editor, News; Toronto, Canada (@Mack_SAnarchy)
1
Sign-In to Vote
Tweet 0 Submit
With this extra day in February (what sorcery is this?) you may think you have an extra day to do your own stuff, whatever. For we fans of Shudder and their lineup of horror, sci-fi and cult gems it means we have to wait one more day for their March schedule. Oh, the pain!
Leading the charge into Spring is the season finale of the Maori dark fantasy series The Dead Lands on March 5th. As far as other series goes I am glad to see that the French sci-fi series Mission returns for season two on March 19th. Not enough people talk about this show.
On the 19th the virgin sacrifice horror flick Satanic Panic, directed by Chelsea Stardust and written by my friend's Ted Geoghagan and Grady Hendrix get delivered hot and fresh. At the end of the month Atom Egypt Mortimer's excellent cosmic horror flick Daniel Isn't Real will arrive. It is also worth noting that his sonic debut feature film Some Kind of Hate rolls out at the end of the month as well.
Have a look at the gallery below for all the releases specific to the States. Hereafter are extra releases in Canada and the UK/Ireland.
CANADA
March 9
THE BABADOOK (Director: Jennifer Kent)
THE CROW (Director: Alex Proyas)
March 23
BELOW (Director: David Twohy)
BRIMSTONE (Director: Martin Koolhoven)
March 30
MAMA (Director: Andy Muschietti)
DONNIE DARKO (Director: Richard Kelly)
UK/IRELAND
March 2
APARTMENT 143 (Director: Carles Torrens)
DARK SKIES (Director: Scott Stewart)
BLOODSUCKING BOSSES (Director: Brian James O'Connell)
March 12
THE ROOM (see above for details)
March 9
EXORCISMUS (Director: Manuel Carballo)
LET THE RIGHT ONE IN (Director: Tomas Alfredson)
LUCIFERINA (Director: Gonzalo Calzada)
March 16
SORORITY ROW (Director: Stewart Hendler)
THE REEF (Director: Andrew Traucki)
March 23
V/H/S (Director: multiple)
March 24
THE CRUCIFIXION (Director: Xavier Gens)
THE FURIES (Director: Tony D'Aquino)
March 31
LOST RIVER (Director: Ryan Gosling) 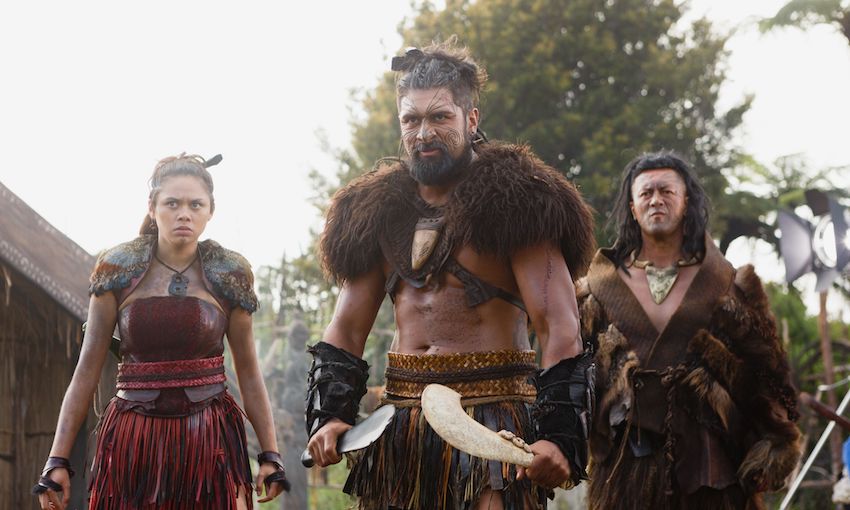 A supernatural adventure set in a mythic Māori past, with an aesthetic that’s part Ash vs Evil Dead and part Xena: Warrior Princess. The Dead Lands features a disgraced warrior, Waka Nuku Rau (Te Kohe Tuhaka), who’s sent back to the world of the living to redeem his sins. But the world Waka returns to is ravaged by a breach between Life and the Afterlife as the spirits of the newly dead now stalk the land and hunt the living.

Waka encounters a determined young woman, Mehe (Darneen Christian), who becomes both his protégé and moral compass. Together, they navigate tribal politics, the unsettled ghosts of Ancestors and other forces both natural and supernatural, on a quest to discover who "broke the world" and how to repair it—if it’s not too late. Also available on Shudder Canada and Shudder UK. An AMC Networks’ Shudder and TVNZ production. 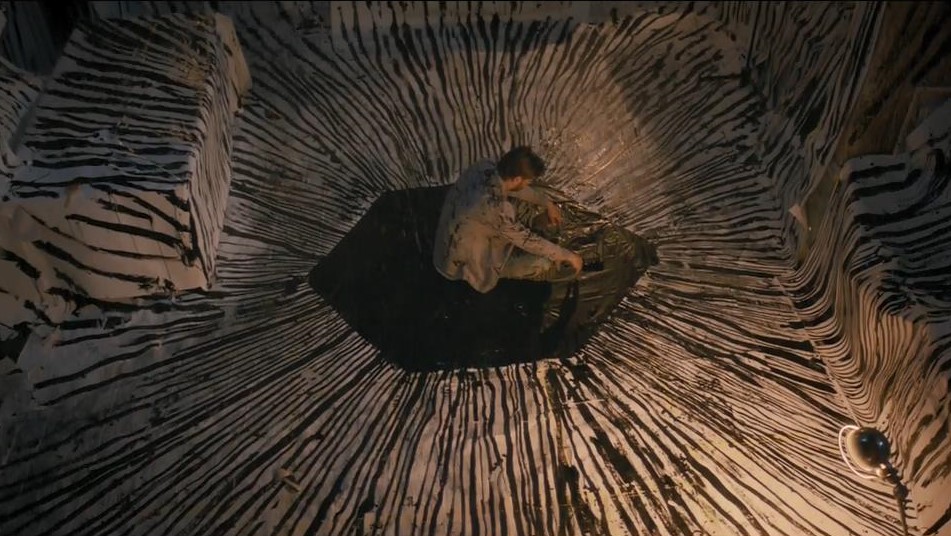 He’s a struggling comic book artist, she’s tired of her job in a big law firm. In search of a more authentic and healthy life, they leave the city and move into an old house in New Hampshire. They soon discover a secret hidden room that has the extraordinary power to materialize anything they wish for. Like children in a fairy tale, they spend days and nights indulging their every material desire. And then one day, they ask for something different: a child, a little boy of their own, only to discover some wishes have dire consequences. Starring Olga Kurylenko (Quantum of Solace) and Kevin Janssens (Revenge), directed by Christian Volckman. A SHUDDER ORIGINAL (Also available on Shudder Canada and Shudder UK) 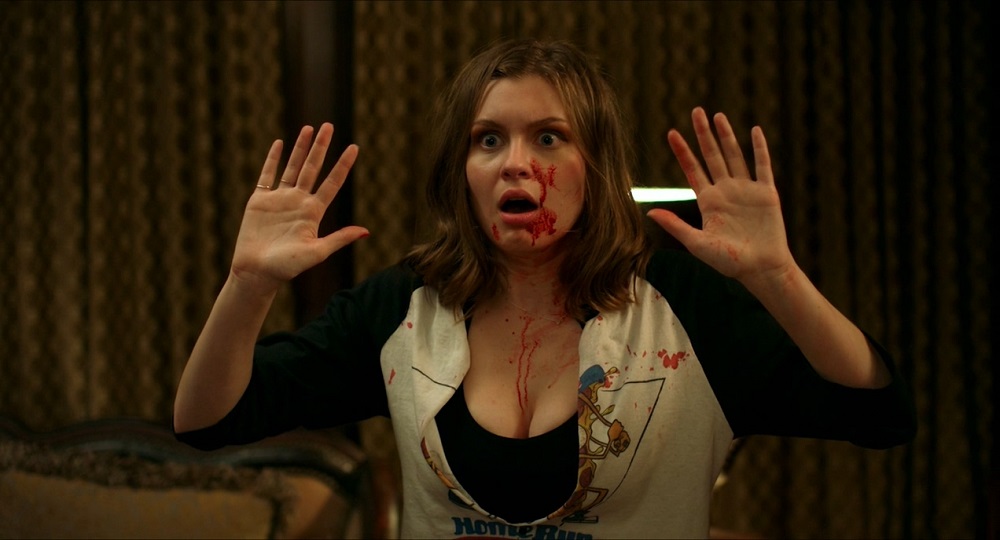 Sam’s first day as a pizza delivery driver is not going according to plan. At the end of a long day and not enough tips, her last delivery turns out to be for a group of Satanists looking for someone to sacrifice. Now in a fight for her life, Sam must fend off witches, evil spells and demonic creatures, all while trying to keep her body – and soul – intact. Starring Hayley Griffith, Ruby Modine, Rebecca Romijn, Arden Myrin and Jerry O'Connell, directed by Chelsea Stardust. A SHUDDER EXCLUSIVE (Also available on Shudder Canada)

A tech billionaire hired a group of astronauts and psychologist Jeanne Renoir to make the first successful journey to Mars. But the voyage didn’t go according to plan. Now, five years have passed since the crew of the Ulysses returned to Earth. The memories and traumas of the first manned voyage to Mars still haunt each of the mission’s survivors. But everything changes when they each experience a vision of Jeanne, convincing them that, somehow, somewhere, she is still alive. A new, secret mission for the Red Planet is launched to find her. But the billionaire still has a few secrets—as does Mars itself. A SHUDDER ORIGINAL. Starring Giorgia Sinicorni, Ben Homewood and Ralph Amoussou, directed by Julien Lacombe. 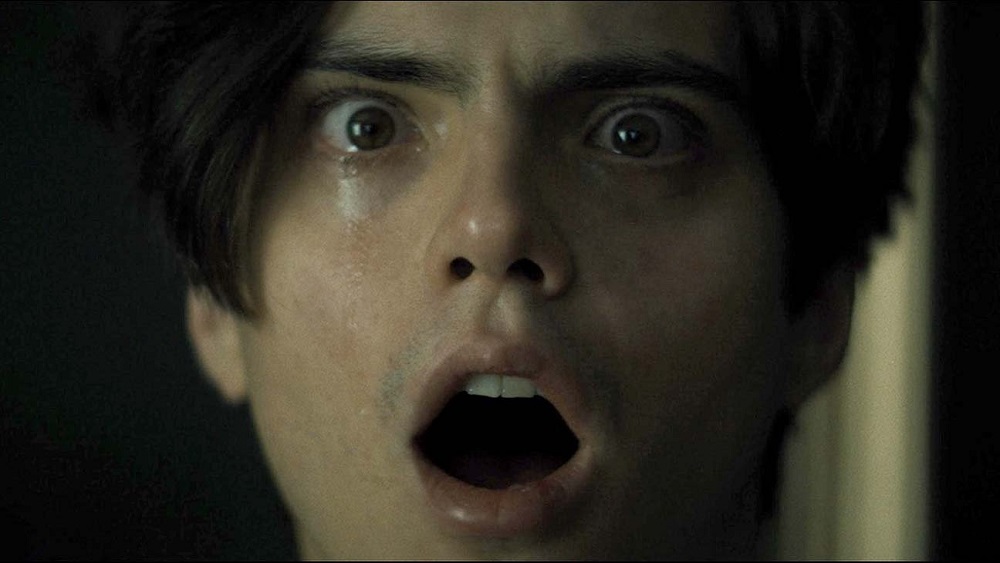 Troubled college freshman Luke suffers a violent family trauma and resurrects his childhood imaginary friend Daniel to help him cope. Charismatic and full of manic energy, Daniel helps Luke to achieve his dreams, before pushing him to the very edge of sanity and into a desperate struggle for control of his mind—and his soul. Starring Patrick Schwarzenegger, Miles Robbins, Sasha Lane, Hannah Marks and Mary Stuart Masterson, written and directed by Adam Egypt Mortimer. A SHUDDER EXCLUSIVE. (Also available on Shudder Canada)

Note: Mortimer’s debut feature, Some Kind of Hate, also will be available starting 3/23. 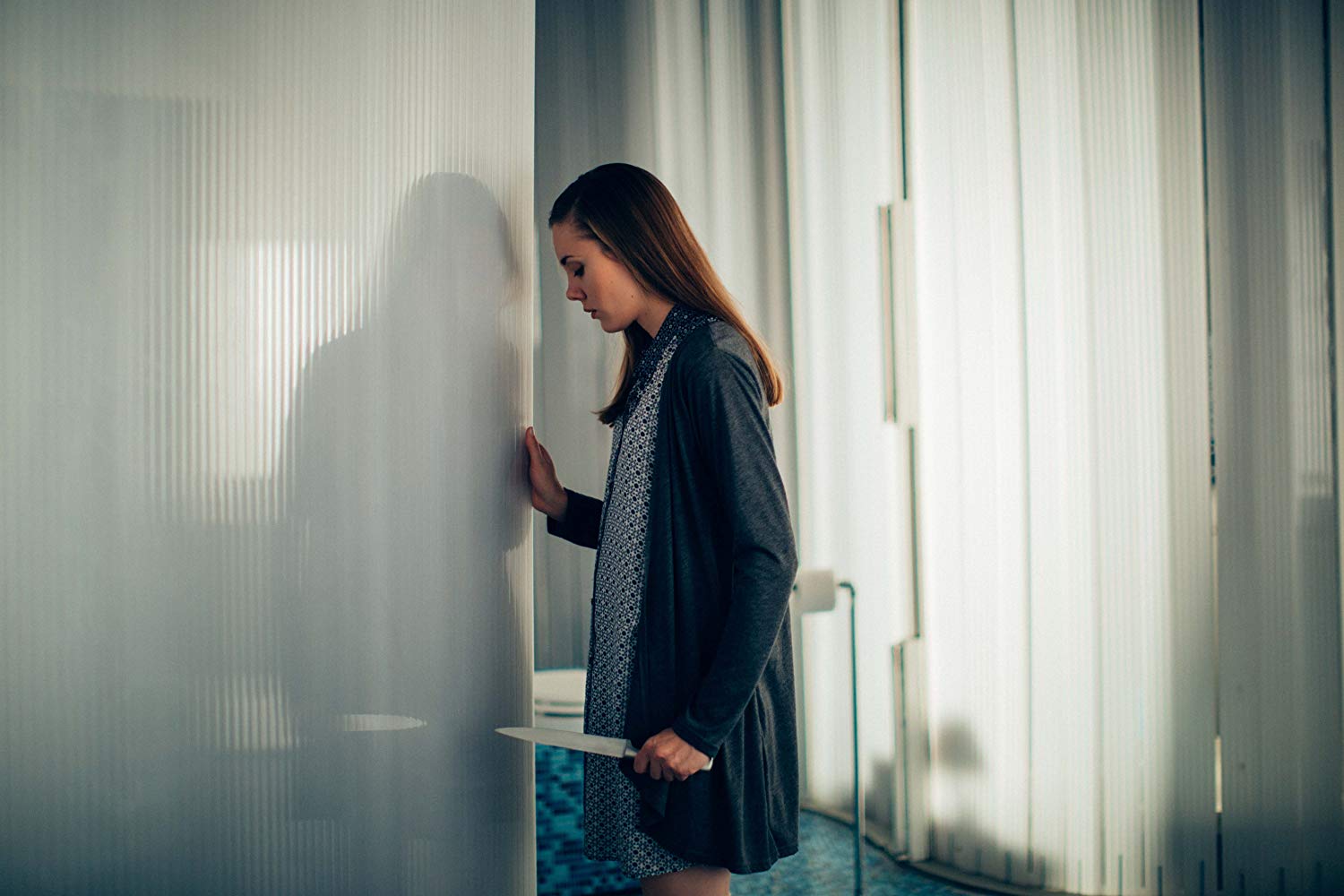 Afflicted with a dermatological disease, young and beautiful Kira discovers that she can replace her skin with that of other girls. Helped by her lover, she plots a murder and the victim becomes her donor, but when the disease returns, she is forced to find more victims. Starring:

Morbid and singular in their small town, Brigitte and Ginger vow to live and die together, but when Ginger is attacked by a werewolf, she grows detached from her sister and embraces a vicious new lifestyle. Written by Karen Walton and directed by ORPHAN BLACK creator John Fawcett, GINGER SNAPS packs dark, affecting themes of family, feminism and oncoming womanhood into a grisly creature feature. A favorite upon release, GINGER SNAPS only grows more ferocious with age, as it takes its rightful place as one of our great werewolf stories. Starring: Emily Perkins, Katharine Isabelle, Kris Lemche 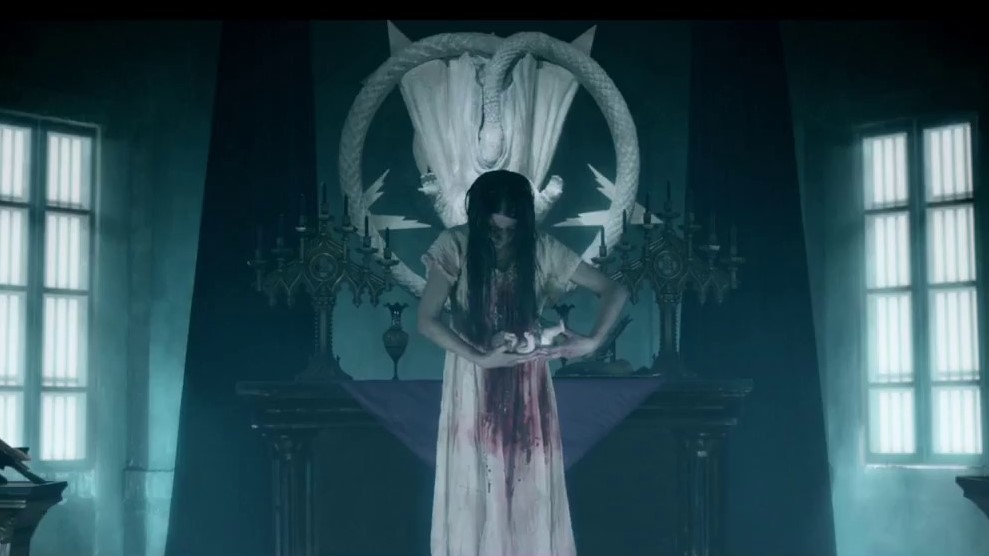 A young, sexually-curious nun and a group of her friends travel to the jungle for an occult ceremony where they encounter the devil himself. Starring: Sofia del Tuffo, Marta Lubos, Pedro Merlo, Malena Sánchez, Francisco Donavon (Also available on Shudder Canada and Shudder UK)

This update on the classic Frankenstein is set in present day and told entirely from Adam the Monster’s perspective. Adam is confronted with nothing but aggression and violence from the world around him after he is artificially created, then left for dead Starring: Xavier Samuel, Carrie-Anne Moss, Danny Huston 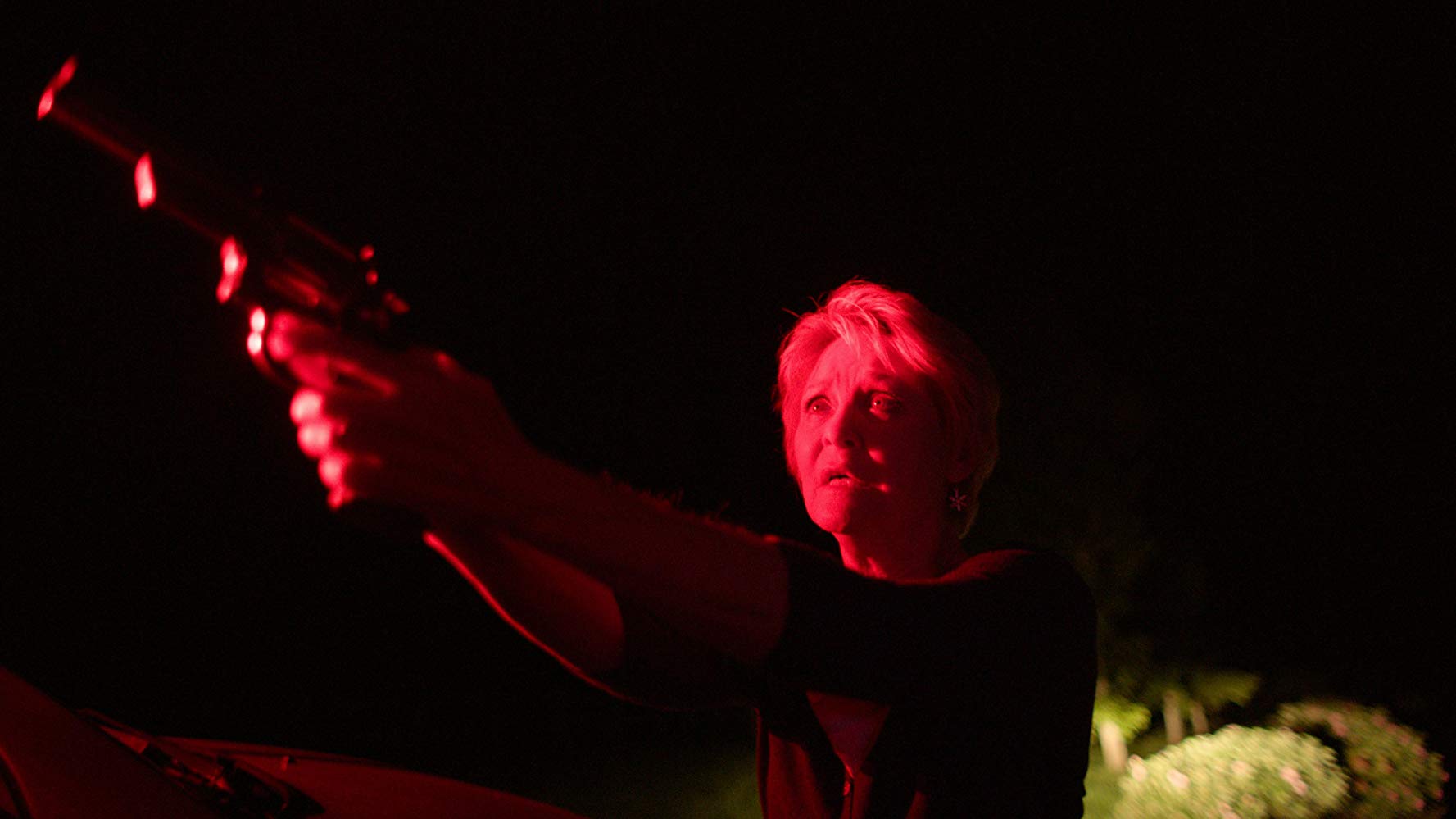 A mother must protect her family on Christmas Day from a demented stranger who is hell-bent on tearing them apart after being rejected. Starring: Dee Wallace, Geoff Morrell, Janis McGavin (Also available on Shudder Canada)

Young ambitious ticket collector Joe is overseeing the last train out of London on a dark and stormy night – the usual collection of passengers on board from the obnoxious teen to the workaholic businesswoman. Suddenly the train screeches to a halt in a forest after hitting something on the tracks, but the investigating driver never returns. Realising an unknown and dangerous threat is lurking in the woods the disparate group of strangers must work together in order to survive a common feral enemy. Starring: Ed Speleers, Holly Weston, Shauna Macdonald (Also available on Shudder Canada) 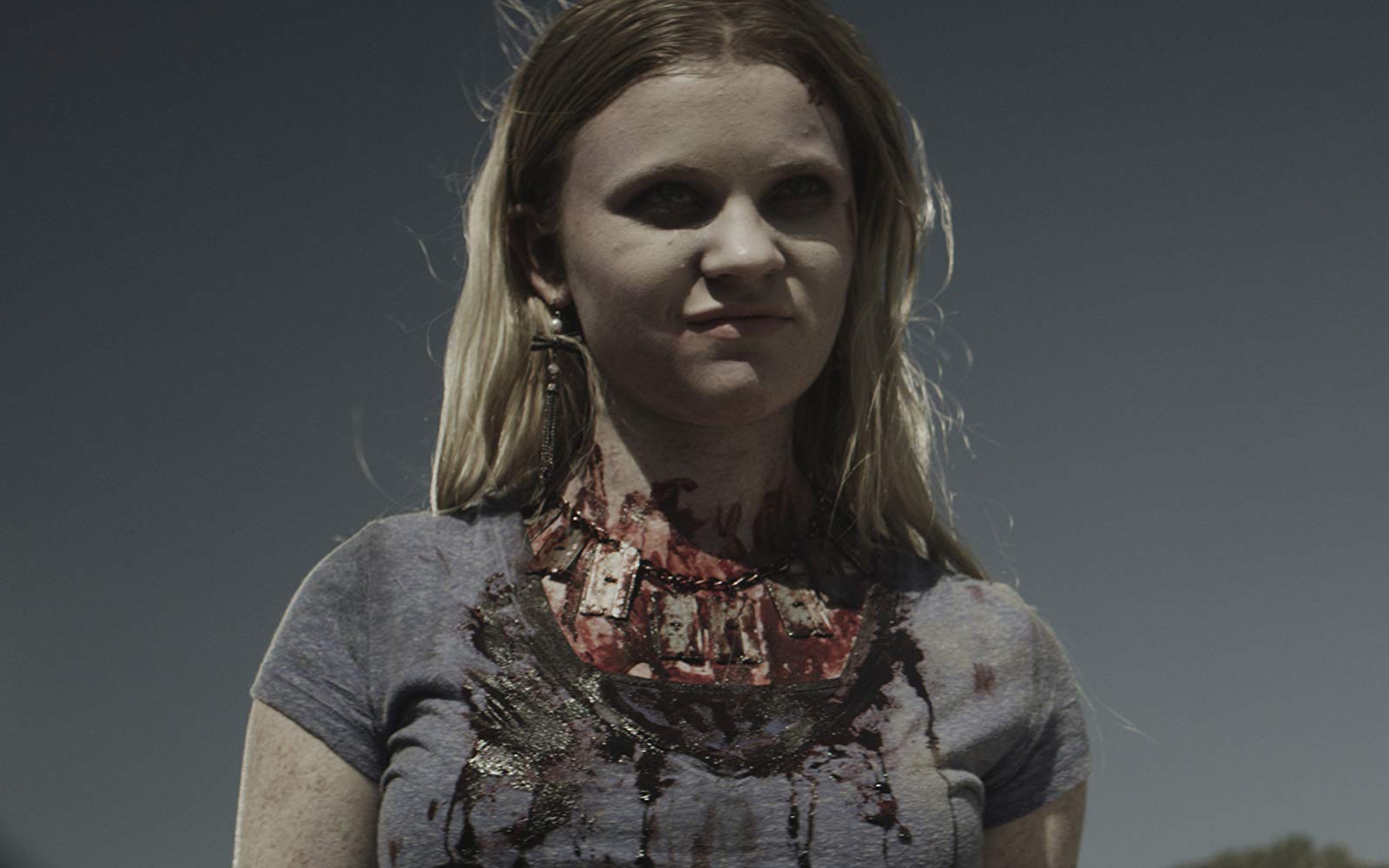 Relentless bullying has turned Lincoln's life into a nightmare. But he soon learns the true meaning of terror when he is sent to a remote school for troubled teens and the harassment starts all over again. Only this time, someone is watching — a teenage girl named Moira who was driven to suicide by vicious bullying years ago. When Lincoln accidentally summons Moira from the grave, he unleashes a vengeful and unstoppable force on a mission of blood-soaked revenge. Starring: Ronen Rubinstein, Grace Phipps, Sierra McCormick, Spencer Breslin, Michael Polish (Also available on Shudder Canada)

Haunted by a horrific childhood trauma for twenty years, Holly struggles with vivid, disturbing nightmares that leave her detached and unable to live a normal life. Then an old friend recommends Holly meet with a charismatic cult leader, leading her on a twisted journey of waking dreams that will begin to unravel the fabric of reality and reveal the truth about Holly’s family…a terrifying destiny. Starring: Clémentine Poidatz, Ali Aksöz, David Sakurai (Also available on Shudder Canada)