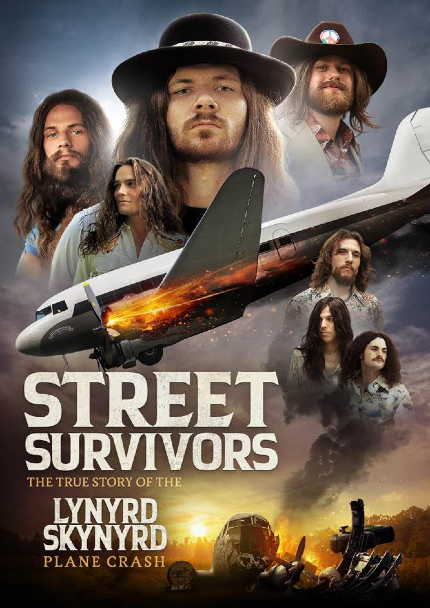 We are honored to debut the trailer for Street Survivors: The True Story of the Lynyrd Skynyrd Plane Crash, which you can watch below.

Written for the screen and directed by Jared Cohn (Devil's Revenge, Devil's Domain), the biopic "recreates the story about the ill-fated flight through the eyes of former Lynyrd Skynyrd drummer Artimus Pyle (who narrates the film)," according to the official synopsis. Pyle "not only survived the plane crash that claimed the life of the band's founder and front man Ronnie Van Zant amongst others, but who also physically pulled the remaining survivors out of the plane wreckage before staggering towards the nearest farmhouse in rural Louisiana to seek help."

Personally, this film strikes a strong, haunting chord. In the fall of 1977, I purchased Lynyrd Skynyrd's album, Street Survivors on vinyl, mostly because of my incurable obsession with the dueling guitar hooks in their famed jam-song "Free Bird" and my desire for more songs like it. I especially loved and listened over and over to "That Smell" and "What's Your Name" and cannot honestly recall now whether I bought the album before or after the tragic plane crash that claimed the lives of seven people, including three members of the band, just three days after the album's official release date. Those songs, that album, and those memories are seared into my brain.

About the film, Pyle says: "This film's story - MY story - is not just about the plane crash but also about my personal relationship with the genius that was Ronnie Van Zant - whom I loved like a brother and still miss to this day."

Currently on its festival run, Street Survivors: The True Story of the Lynyrd Skynyrd Plane Crash will roll out to theaters nationwide, beginning on June 30, 2020, via Cleopatra Entertainment. Check out the trailer below.

Do you feel this content is inappropriate or infringes upon your rights? Click here to report it, or see our DMCA policy.
Artimus PyleJared CohnLynyrd Skynrd

More about Street Survivors: The True Story of the Lynyrd Skynyrd Plane Crash