Drink Along Review: "I Lost My Body" - Give This Film a Hand 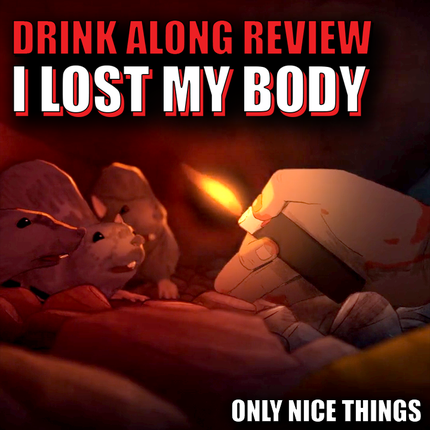 Who knew a film about a severed hand trying to find its owner could pair so well with teenage loss and isolation? I Lost My Body is a French animated film from Jeremy Clapin that makes you reexamine the things you’ve left behind or taken for granted and hopefully instills a sense of hope in the viewer. While the severed hand battles hungry subway rats, a young teen combats emotion obstacles with only his memories of better times for comfort. While sad to its core, both the hand and protagonist, Naoufel never stop moving forward in their journey to find meaning and connection in the lonely city streets of Paris.

For the video review, I was influenced by the DVD release of the Japanese zombie movie, Wild Zero. A special feature on the disk was a drinking game that prompted the viewer to take a drink any time certain stipulations appeared on screen like fire shooting out of something or a zombie's head blowing up. This always followed me and I finally got a chance to incorporate that aspect into what I call a drink along review. Anytime I say something negative, I have to take a drink. As an added bonus, a beer bottle will also pop up on screen to prompt the viewer to take a drink as well.

So grab some beer, huddle up in your igloo, and watch the drink along review HERE.