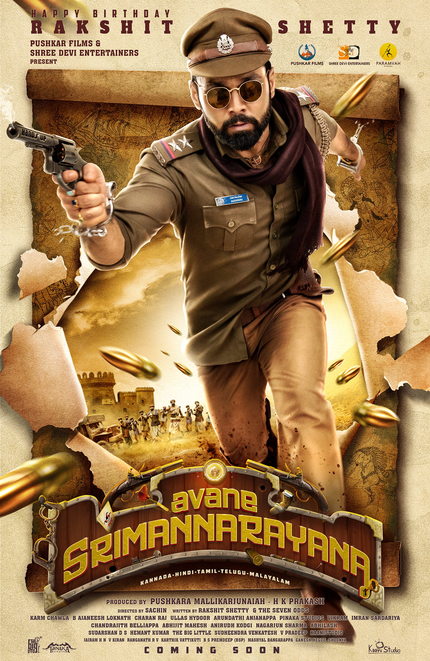 Kannada language film star Rakshit Shetty first came to our attention back in 2014 with his second film as a writer and director, Ulidavaru Kandanthe (As Seen by the Rest). That film was a stylistically adventurous gangster epic that borrowed from everything to non-linear Tarantino-esque storytelling to Sin City's arch visual style, while leaning heavily on India's masala traditions.

In the years since, Shetty has become one of Karnataka's biggest movie stars but this is his first return to the genre that made him a household name. Written by Shetty and directed by Sachin, Avane Srimannarayana is being touted as being a part of a new genre called "Southern Odd Fiction", but it looks like they took standard masala tropes and cranked them up to eleven, giving the film a very exciting look and feel remeniscent of recent adventures like Deeraj Vaidy's Tamil gangster comedy, Jil Jung Juk.

Kannada language film productions have regularly taken a backseat to those from other regional film industries in international markets, with Hindi, Telugu, Tamil, and Malayalam films typically sucking up most of the bandwidth. However, with the recent success of Yash's KGF crossing language barriers to become a huge hit, Avane Srimannarayana looks to be the next big thing to keep Kannada cinema on the map with audiences around the world.

While a firm release date hasn't been announced as of yet, I would expect Avane Srimannarayana to hit specialty cinemas around the world around the first quarter of 2020.