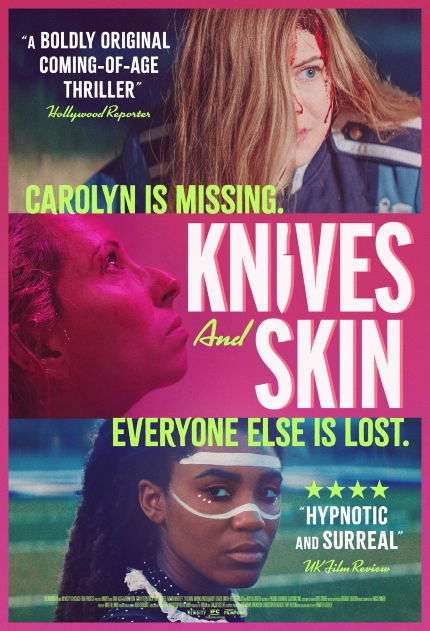 Knives & Skin, Jennifer Reeder's second feature film, is a 'noir' of many colours: part neo, part femme, part pastel; it will likely draws comparisons with Blue Velvet for it's oddball yet seedy town setting; Brick and a lot of John Hughes films for its focus on high school students; Magnolia for the choral singing, both by the school choir and by the characters at random moments; and much of John Waters' work for its not-so-subtle queer coding. And while these comparisons are somewhat accurate (as most films take inspirations from many sources), this is a film entirely of its own kind, one steeped in knowledge of the oddities of family life, the love of 80s music, and teenage girls' experiences, fraught with known and unknown dangers.

Have you seen Carolyn Harper? We have; or at least, the last we saw of her, she (Raven Whitley) and football player Andy (Ty Olwin) were by the quarry, ready to have sex. That is, until Carolyn changed her mind. An angry Andy then drove off without her, leaving Carolyn and her marching band hat (but not her glasses) behind, with Carolyn injured and crying for help. Not her mother, nor her friends, nor the police, know what became of her, and so the high school year in this American mid-west town begins on a sombre and sobering note, with all its problems rising to the surface.

Carolyn's classmates each have their own issues to deal with: Joanna (Grace Smith), whose father is out of work and mother seems to never get out of bed, has resorted to selling used women's underwear to raise enough money to leave her town; Laurel (Kayla Carter), a popular cheerleader, hates her boyfriend and increasingly attracted to Cauleen (Emma Ladji) which she must keep secret; and Charlotte, determined to keep her status as an outsider is trying to keep her band together and her crush on a football player secret. As they navigate these days, fraught with predators, new and overwhelming desires, Carolyn's disappearance hangs over them as a warning of what might happen if they don't tread carefully.

But Knives and Skin does not stick to one classification, or one story; it acknowledges how both the terrifying and the mundane happen at the same time, as these young women navigate these changes in their lives. None of them are reduced to one characteristic or activity, and Reeder eschews cliches of 'type' to give us characters each likely with a piece of ourselves; we can recognize how we each were trying out different things at that age, either with clothes, music, activities, or people, and we could never be pinned down. There are neither saints nor sinners (among the women or the men), nor will they be shoved into the categories that their peers (and the world) tries to force them into (usually based on whether or not they satisfy men's desires).

Updating the black and white shadows, sharp edges and angles of traditional noirs, cinematographer Christopher Rejano gives us shadows against greens and pinks, soft edges that still lead to darkness, and angles that reveal more than they hide, as if Carolyn's disappearance has made everything else appear: affairs, true intentions, which guys are the good ones and which are the assholes. The somewhat unusual costumes and hair styles of some characters might seem extreme, but again, Reeder is asking to see her characters from the inside out; these are girls who want to be themselves in a world that is trying to force them to conform (sadly close to how the real world actually works, for women, and anyone not of 'the norm').

The film proceeds at a steady pace, given moments of pause, usually of the musical form, with gorgeous choral renditions of 80s pop classics such as "Girls Just Wanna Have Fun", "Our Lips are Sealed", and "I Melt with You". Whether by the actual a capella choir or by the characters in their moments of solitude or introspection, these moments give the film its 'inside out' tone, one in which characters speak in ways that are simultaneously strange and indirect, yet oddly on point with the truth even as they often attempt to evade it.

At times fraught with anxiety, haunting in quiet horror, blackly comedic, and aching with with sorrow and love, Knives and Skin is many things and also defies easy categorization, as it puts forth a perspective that is multiple and complicated. This is highly likely to become a cult classic even as it divides audiences, strange and at times off-putting while it still invites you to linger in its oddball world.

Review originally published during L'Etrange 2019. The film will open in U.S. theaters and VOD on Friday, December 6, 2019, via IFC Midnight.

Do you feel this content is inappropriate or infringes upon your rights? Click here to report it, or see our DMCA policy.
IFC FilmsJennifer ReederKate ArringtonMarika EngelhardtTim Hopper

More about Knives and Skin