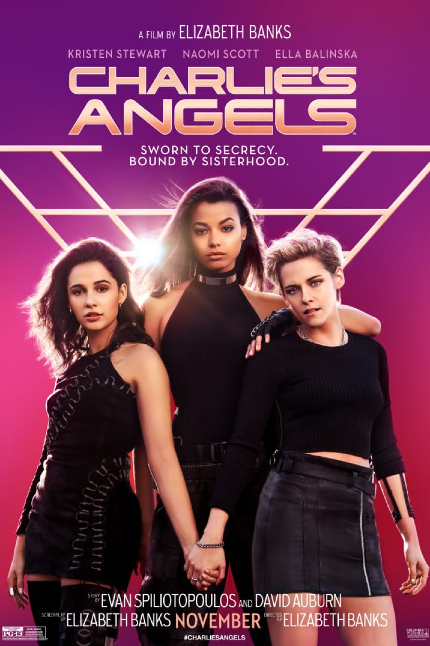 Once upon a time, there were three women who handled very hazardous duties for themselves.

Charlie's Angels
The film opens in theaters across North America on Friday, November 15 via Columbia Pictures.

As a teenager who raptly watched the early seasons of T&A sensation Charlie's Angels on television in the 1970s, I was quite curious to see what Elizabeth Banks would make of a modern-day adaptation on the big screen.

Her intentions are made clear in the very first image, a very tight close-up of Kristen Stewart's face in a glamour shot that wouldn't be out of place in the 1940s (except in soft colors here instead of black and white). The dialogue that Stewart exchanges with a besotted male is very firmly of the current age, however, gliding gently and sharply into a brief, bullet-filled scenario that also introduces Ella Balinska as a dynamic action figure.

Now a triple-threat as an actress, writer and director, Banks is clearly well-aware of the lurid past of the franchise, but looks beyond the surface attractions of the original TV series and the previous, loud and flashy, McG-directed feature-film adaptations to consider what, if any, advantages have actually been made available by a private investigative firm's devotion to female agents in the field.

Stewart and Balinska play experienced agents who are teamed up by their local Bosley (portrayed by Banks, who also explains the investigative Townsend Agency's structure) on a case involving a powerful MacGuffin that threatens something or other on a big scale. The threat itself functions solely as a plot device that allows the film to travel the world in search of beautiful locations, such as in a James Bond vehicle.

Naomi Scott, who recently starred in Disney's Aladdin as an empowered Princess Jasmine, here adds a different element to the expected formula by playing a brilliant engineer who brings the MacGuffin to the attention of the Townsend Agency before getting swiftly caught up in a murderous plot. She is cast in a role that, primarily, might be considered comic relief; it's a role that Bill Murray and Bernie Mac filled in the previous feature films.

Charlie's Angels is quite successful in flushing out and recontextualizing the Big Picture concepts behind the premise. Banks demonstrates a sure hand in all the character interactions and brief action bits between them. Scott stands out among the leads, adroitly handling the comic intentions and dramatic shadings that inform her character, while Stewart and Balinska display good chemistry as the considerate voices of reason and experience. They, along with Banks herself and Patrick Stewart as a newly-retired "Bosley" add a touch of welcome dramatic weight to the enterprise.

Where the film flounders is in the extended action sequences, which employ fast-cutting techniques to distracting effect. The chopped-up choreography makes it difficult to follow and nearly impossible to track the main players, which ends up diminishing any possible suspense or much interest in what's happening.

Perhaps it's also a signal that traditional masculine ideas for broadly-intended action movies need to change. Charlie's Angels is a decisive step in that direction.

Do you feel this content is inappropriate or infringes upon your rights? Click here to report it, or see our DMCA policy.
Charlie's AngelsElizabeth BanksElla BalinskaHollywoodKristen StewartNaomi ScottPatrick Stewart