Now Streaming: REVENGE OF THE PONTIANAK, Darkness Descends in Malaysia 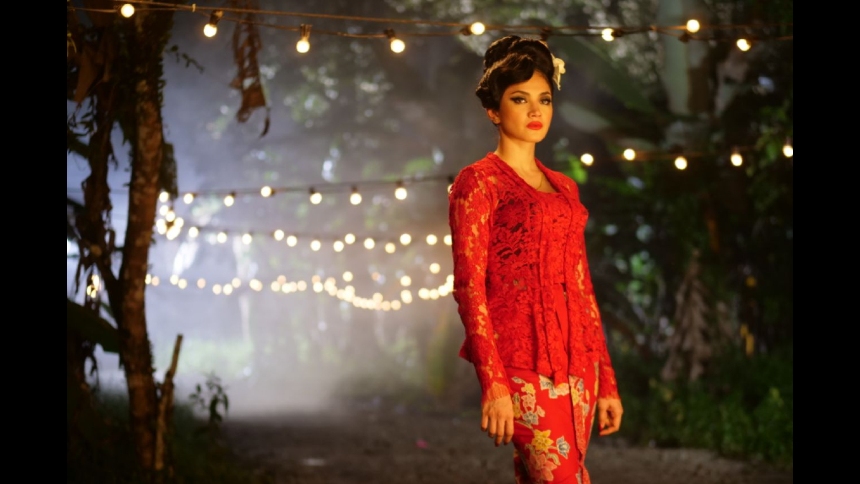 "I told you to clean your house!"

Revenge of the Pontianak
Now streaming on Netflix.

Marriage becomes deadly in a horror film that is, by turns, dramatic, daring, and educational.

Frankly, films set in Malaysia represent a blind spot for me, so a horror flick recently released on Netflix was too tempting to pass up. Per Wikipedia, at least three Malaysian horror films were released theatrically during October, and I wish I knew how Revenge of the Pontianak stacks up against them.

The film is the first Singapore-produced pontianak film in 18 years, according to Yahoo Lifestyle Singapore, representing a collaboration between Singapore director Glen Goei and Malaysian director Gavin Yap. Goei says in an interview that he was influenced by classic local pontianak films of the 1960s and 70s.

The opening title card identifies a pontianak as the vengeful ghost of a woman who has died during childbirth. Set in 1965, the film begins with a happy nighttime marriage ceremony between Khalid (Remy Ishak) and Siti (Shenty Feliziana) in a small Malaysian village.

Khalid grew up in the village and has returned with his new bride and his young son Nik (Nik Harraz Danish) to start a new life. Khalid's family, including his married brother Reza (Hisyam Hamid) and their parents, all still reside in the same area, along with longtime friend Rais (Tony Eusoff).

Rais is a bit of a rascal and leaves the reception with a lovely lady. Sadly for Rais, he encounters a ghostly force on a nearby lonely road and ends up hanging from a tree. The local spiritual leader, Su'ut Din (Namron), identifies the culprit as a pontianak and charges all the villagers with the responsibility of cleaning their houses, presumably of anything that might have invited an evil spirit to take up residence. Soon, he raises a finger of suspicion directly at the outsider, Siti, who is frightened out of her mind.

From my limited, U.S.-based perspective, Revenge of the Pontianak appears to be a standard-issue, slowly-kindling horror drama, but it steadily becomes apparent that it is not following every familiar North American trope. That made it all the more fascinating for me to watch as it goes.

The presence and actions of the ghostly apparition raises prominent questions of guilt and responsibility. On this point, especially, the residents agree with the stern and accusatory Mr. Dan: the pontianak would not have invaded the village without good reason. In order to rid the village of her evil, the true source must come forth, and that takes time for buried secrets to be exhumed.

As photographed by director of cinematography Jon Keng, the film looks beautiful. The opening scenes feature ravishing costumes, courtesy of costume designer Akma Suriati. What's interesting about this approach is that the landscape does not look or feel sinister; instead, it's the apparition, the pontianak, who stands in stark contrast to her surroundings because of her darkened soul.

Blood is spilled, yet restraint is exercised and the focus is never on the ghost's actions, per se, violent though they may be. As strongly suggested, her vengeance could be entirely justified, which may be the scariest idea in the movie.

Summing up: Marriage raises the specter of a deadly ghost in a fascinating Malaysian horror film.