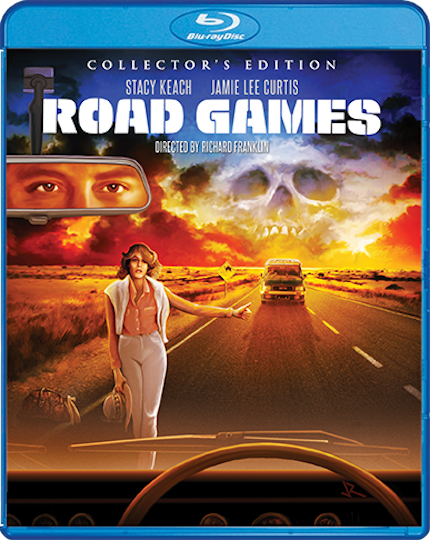 Out this month from Scream Factory, Shout! Factory's horror/thriller imprint, comes the 1981 Australian thriller, Road Games. This collector's edition features a ton of bonus interviews and a colorful poster with some pretty rad art --- that is, if you order soon enough.

Directed by Richard Franklin (Patrick, Link, Cloak & Dagger), the film stars Stacy Keach as Pat Quid, a trucker in the Outback who picks up an American along the way --- a young Jaime Lee Curtis, who also played a hitchiker in John Carpenter's The Fog ... Funny enough in that film she gets picked up by Tom Atkins, who's a similar character to Keach's Pat Quid here in Road Games.

Anyway, there's a serial killer on the loose, because of course there is --- and there are plenty of other hitchikers and red herrings to go around while Pat tries to do the right thing and get the police on the line. Meanwhile, another hitchhiker starts to believe that he's the killer.

The coolest thing about Road Games (for me) is that the film starts out with a strong lead who eventually becomes an unreliable narrator, and there's a decent payoff at the end. However, the film could have done with some more edits, as it takes forever to get to the finale, and my mind kept wandering until the action bits. I don't usually have an issue with slower films, and yes, the early '80s had plenty of them, but Road Games was a real slog at times.

Still, it's more or less a fun time, and Jaime Lee Curtis fans and Ozploitation completists will want to see this one. And again, the ending is pretty great. I did get turned off from the director referring to himself as the Australian Hitchcock, however.

As per usual, Scream Factory went all out for this Blu-ray release with a huge number of interviews, both old and new. You can watch Keach, Curtis, and even composer Brian May (yes, the guitarist from Queen) speak about the film, in addition to a script read, and extended interviews from Mark Hartley's fun Ozploitation doc, Not Quite Hollywood (which I saw at Fantastic Fest a few years ago).

If you’d like to learn more, watch a trailer, and/or get a copy of Road Games for yourself, head over to Scream Factory’s page for the film here.