As advertised, Germany’s “economic miracle” (translated from the native term “Wirtschaftswunder”) of the postwar era was something of an unforeseen godsend. In a short time, the defeated, decimated country saw a sharp spike in prosperity and wealth. The scars of guilt and shame were quickly paved over with capitalism and the luxury it can bring. Against all odds, Germany was happy. (Well, as happy as Germany ever could let on).

Then along comes Rainer Werner Fassbinder to rain on the parade of progress. Actually, Fassbinder did not act alone in this cinematic assault on his homeland’s newfangled heyday. He was a key player in the intentional film movement known as The New German Cinema, an enclave of young, uncompromising auteurs looking to hold a much-needed mirror up to the country’s recent past. The New German Cinema, with each member of its roster (including the thoroughly unique voices of Wim Wenders, Werner Herzog, and Volker Schlondorff) more full of piss & vinegar than the next guy, was bound to strike a truly patriotic blow by telling the unvarnished truth. Only trouble was, the mirror that they held up, regardless of who was holding it, proved too scuzzy and unpleasant for the domestic audience. Germans ignored the New German Cinema in droves.

Fortunately, the international film festival circuit, such as it was in this moment of the 1970s and early ‘80’s, took notice, and dispatched prestigious awards accordingly. Suddenly, aggressive and unpleasant Germans were all the rage, so long as their unpleasant aggressions were directed at the unrepentant former Nazis back home. There proved to be no shortage of fuel for their fire, nor forms the films could take.

Fassbinder, though - one of movements most prominent members - wasn’t content to simply make such films in this much-needed idiom. He would utterly flood the burgeoning market. And he would do it his way all the while.

To call the filmic output of Rainer Werner Fassbinder unprecedented would not be an exaggeration. In the history of noteworthy cinema, only the 1960’s run of Jean-Luc Godard comes close. Naturally there was artistic evolution, and eventually, a rise in the scope of his film productions.  (Amid his onslaught of filmmaking, he and his devoted core group also did theatre). As Sirk-ian melodrama and other prominent cinematic forms of the past and present became stronger and stronger influences for Fassbinder, he ramped up towards a series of films that would directly grapple with the darker sides of Germany’s economic miracle. Three films would result, each outstanding in its own way, if by varying degrees: 1979’s The Marriage of Maria Braun, 1981’s Lola, and 1982’s Veronika Voss. Collectively, they would come to be regarded as the central jewels upon the director’s uniquely dingy crown.  The BRD trilogy.

Educational aside: BRD is the given abbreviation for the Bundesrepublik Deutschland, in English referred to as Federal Republic of Germany. Back then, the term referred to West Germany, though now it would apply to all of Germany.

There’s are splendid truths amid Fassbinder’s gritty realities, always. Though in the case of The Marriage of Maria Braun, the reverse is just as valid. No less than Fassbinder’s masterpiece and one of the Best Movies Ever Made, the film never missteps in its charting of one woman’s concurrent rags-to-riches rise-and-fall. Lead actress, Hanna Schygulla, back from Fassbinder excommunication, gives the performance of her career, elevating her already considerable mystique to near-mythic levels. She exudes both the pain of loss, the warmth of home, and the utter chill of complete moral emptiness. Fassbinder, already known for being a particularly apt director of women, steers Schygulla to greatness as the alluring black widow peon and goddess, Maria Braun.

The Marriage of Maria Braun in and of itself on Blu-ray would be cause enough for celebration amongst film buffs. But with it, we also get the accompanying subsequent films, Veronika Voss and Fassbinder’s Lola. Although Maria Braun marked the departure of Fassbinder cinematographer Michael Ballhaus (who broke from this codependent clique for Martin Scorsese and America), all are three films are visually astonishing in their own ways, the latter two intensely so.

Before Indiana Jones’s movies flew out of chronological order, the BRD Trilogy (conceived with writers Peter Märthesheimer and Pea Fröhlich) saw fit to do the same.  Bearing the imposed labels “BRD 1”, “BRD 2” and “BRD 3” (sometimes onscreen), the latter film, Lola, was actually released the preceding year of BRD 2, Veronika Voss. Although Fassbinder had slowed his pace in favor of upping production value from that of his earliest work, these two BRD entries were indeed made one after the other. Following them, Fassbinder would only complete one more film before his untimely death, 1982’s Querelle. Perhaps then it should not be a terrible surprise that the intuitive (if also terribly difficult) Fassbinder was, with these pictures, ruminating on death.

In Lola, Armin Mueller-Stahl plays an upstanding newly appointed City Building Commissioner who falls under the spell of brothel performer and denizen, Lola (Barbara Sukowa). Wildly alive with Bava-like swaths of untethered color, this sly rethinking of the Josef von Sternberg/Marlene Dietrich debut bombshell The Blue Angel (1930), is determined to be anything but blue. 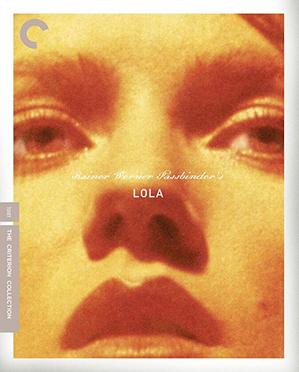 Instead, its brothel-based performance scenes become increasingly infused with Nazi-ism as they occur, culminating in a raucously spirited carrying of a scantily clad singer in front of a giant swaztika banner. Suddenly, the candy-colored artifice of the world proper has fully given way to the cavernous darkness of the illicit brothel.  Lola is alive with such verve, even as it serves as blatant lament of Germany’s past. Bold, even for Fassbinder.

With Veronika Voss, taking place in the mid-1950s, things go starkly black and white, with a certain haunting, ethereal glow. Hooked on morphine and kept in stead by her duplicitous doctor (Annemarie Düringer), the aging former UFA screen icon of the film’s title (played evocatively by Rosel Zech) slides ever further away from life as an intrepid sports journalist (Hilmar Thate) works to unravel her story.  Voss, the central character, is a sad shadow of a sad shadow, that being the likes of Sunset Blvd’s Norma Desmond.  The character of Voss, and this film itself, is based upon the very real plight of UFA star Sybille Schmitz, whom apparently once had a flightier with Goebells himself.  Alarming in tone and atmosphere, Veronika Voss is a powerful piece of cinema, and is absolutely beautiful on this disc.

Fassbinder’s BRD Trilogy stands as an undeniable apex of the movement and is done glorious justice by Criterion with this immaculate high definition re-release of its long-out of print DVD box set.  At the

time of this review, this must-own Blu-ray set has been available for several months.  Nevertheless, the timing is apt in terms of the global political scene, the contemporary state of cinema.  Additionally, the current sale season offers stragglers a chance to acquire this set at considerable discounts.  In 2004, when Criterion released this set on DVD, it was met with the strongest of acclaim, named by numerous home video sites and organizations as the best of the year- with entirely good reason.  In every department, Criterion went above and beyond.


The extras are among Criterion’s most probing and carefully cultivated; not at all a mere array of vintage talk show clips and whatnot. With this box set, one can and should make a bona fide study of latter-day Fassbinder. One recommends beginning the commentary track for Maria Braun, featuring candid memories and insights from two who knew him best, the late cinematographer Michael Ballhaus, and fellow New German Cinema filmmaker, Wim Wenders. From there, one will be all the more prepared for the ensuing deep dive.

As Germany erects a new culture of capitalist materialism and comfort, its own gravely problematic past is passively aggressively walled off, cloistered rather than dealt with. Though Maria Braun in particular was a rare breakthrough in the German culture - elevating both Fassbinder and Schygulla to superstar status - it’s painfully clear, even today, that the mission of the New German Cinema failed to make its intended political international impact.  The same, however, cannot be said about the movement’s artistic impact, both on the medium of cinema at the time, and onward.

The Marriage of Maria Braun