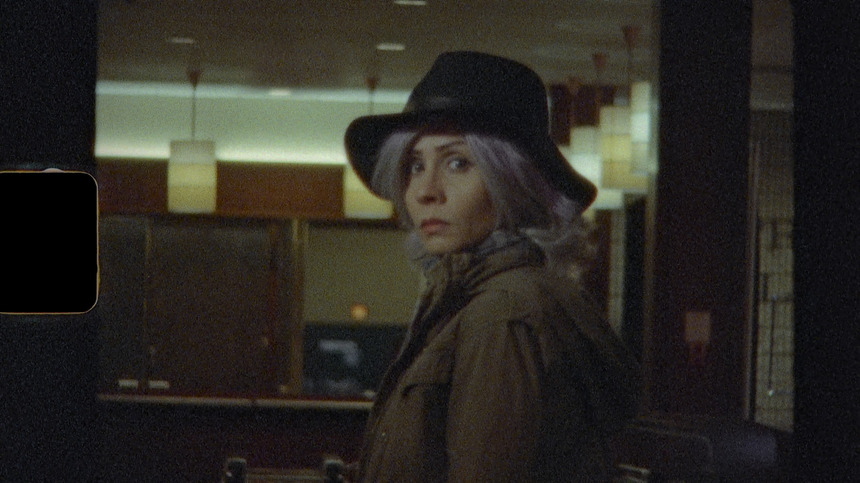 Nostalgia was the driving force for the creation of some of the most interesting and entertaining genre films (and television series) of the past several years. While it's typical for nostalgic movies to fuss over wardrobe, décor, and music selections, few have committed so fully to recreating a particular overall aesthetic as Killer Queen, a hypnotic, hypnagogic low-budget Canadian love letter to exploitation cinema.

The film follows a mysterious woman (Fatima Maziani, spouse of the director) who seems to have been recently discharged from a psychiatric care facility. She moves through the world in a dreamlike state, haunted by an imaginary, shadowy man who instructs her to kill.

While our heroine doesn't appear to get any satisfaction out of dispatching her victims, she doesn't feel any guilt or remorse either. She kills only to silence the voice in her head, and does so without emotion or excess. The murder scenes are accordingly bloody, but not gratuitous, at least by genre standards. Her murderous moves are punctuated by Norman Orenstein's campy, menacing yet beautiful score.

Killer Queen is an exercise in mood and aesthetics first, and a thriller second. Those looking for an outrageous grindhouse parody in the style of Robert Rodriguez will be disappointed. Director Ramin Fahrenheit seems more interested in recreating precise details that enrich the whole. Shooting with a Super 8, and by necessity recording voices and sounds separately, Fahrenheit successfully achieves the feeling that Killer Queen might be a forgotten film from the late 70's or early 80's. The movie has a wonderfully uncanny air to it; something that might be stumbled upon while channel surfing late at night.

The setting is a vague, ominous city, but the real filming location was Toronto. It makes for a fittingly cold, alienating backdrop, but many key scenes actually take place within confining interior spaces. The woman's apartment and the homes of both her best friend and her equally-mysterious love interest (Fahrenheit) are all small, mostly windowless dwellings. It's often unclear whether it's day or night (confounded further by the achronological structure of the narrative), or some uneasy, liminal nook between the two.

Fahrenheit, in a post-screening Q&A, confirmed that mood was the most important thing he wanted to get across with his debut feature, and he certainly managed to do that. Perhaps as a result of prioritizing this over plot, the film at times drags and loses its way, and it will no doubt alienate some viewers. That being said, Killer Queen weaves a special spell that lingers, and has only grown in my estimation since my initial reaction. I'm looking very forward to seeing where Fahrenheit will go from here.

VIFF hosted the World Premiere of Killer Queen as part of the Future // Present series.

Do you feel this content is inappropriate or infringes upon your rights? Click here to report it, or see our DMCA policy.
canadianfatima mazianigrindhousehorrorkiller queennostalgiaramin fahrenheitretrosuper 8vancouverviff