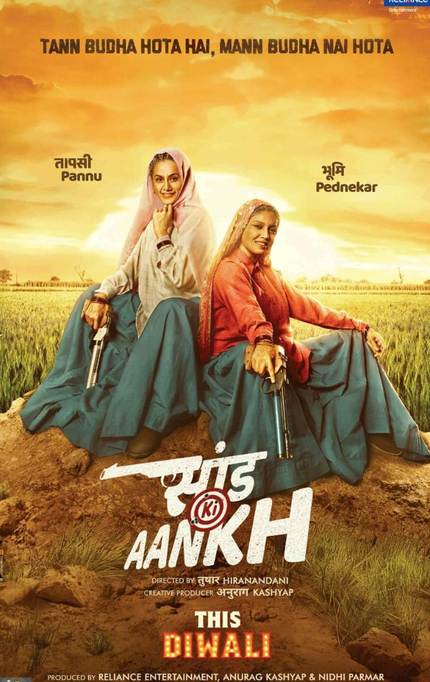 A pair of sharpshooting Indian grannies paint a target on Patriarchy's back in Saand Ki Aankh, a rousing Bollywood biopic from director Tushar Hiranandani. In the north Indian state of Uttar Pradesh, archaic old traditions die hard, and the ingrained misogyny makes some women's lives little more than an endless series of pregnancies and chores in service of the family home. Such is the lot of sisters-in-law, Chandro (Bhumi Pednekar) and Prakashi (Taapsee Pannu) Tomar, who've become little more than incubators for their stubborn husbands next contribution to the never ending line of mouths to feed.

When a shooting range opens up in their village, the grandmothers discover quite by accident that they are both crack shots. Encouraged by the shooting coach Dr. Yashpal (Vineet Kumar Singh), Chandro and Prakashi begin to take the sport seriously, eventually going on to become some of the most feared competitors in Indian sharpshooting and winning hundreds of medals in the process.

Unfortunately for the Tomars, all of this was done behind their husband's backs, which leads to an incredibly tense situation when the men find their dominion over their wives challenged and decide that the only way to regain their reputations is to punish them publically. A tragic turn of events that sparks on a lively feminist tale of grannie power that ends up powering this Bolly-fied sports biopic through to its mostly predictable, but engaging, end.

In his debut as a director, Hiranandani plays to his strengths as a writer of broadly masala flavored crowd pleasers. Saand Ki Aankh is the latest in a recent glut of sports biopics to come out of India, many of which deal with similar underdog, and specifically feminist, challenges. Though while films like Mary Kom and international megahit, Dangal, take a more serious approach, Saand Ki Aankh is happy to play the Bollywood game, with a number of song and dance sequences, comical misunderstandings, and melodrama.

Those expecting a serious, deadpan look at the politics of feminism and gender equality in rural India will likely be taken aback by the film's light-hearted look at this serious issue. However, Bollywood fans will likely eat it up, as it fits in nicely with the national cinema's long history and traditions. Issues of misogyny are front and center in the film, largely dismantled by emphatic speeches and reverse psychology in a way that only Bollywood can make appealing.

Pednekar and Pannu both deliver solid performances in the lead roles, only to be undone by some significantly less than convincing old-age makeup that belies the film's more hearty ambitions. Much has been made in the press about the idea of these 30-something performers playing the roles of women in their 60's, and while I wish I could say it doesn't make a difference, I was always keenly aware that it was a performance in what looked like old-lady drag. Old age makeup is notoriously difficult to pull off, even in the best of circumstances with the best artists in the world, and unfortunately here the execution falls short.

Saand Ki Aankh isn't going to be a film that will convert non-Bollywood fans to devotees of the form, but for those already familiar, you pretty much get what you're looking for. It is a solidly entertaining piece of "girl power" masala that I found roundly engaging and worth a watch.