Montreal Nouveau 2019 Review: THE VAST OF NIGHT, Aliens and the Art of Listening 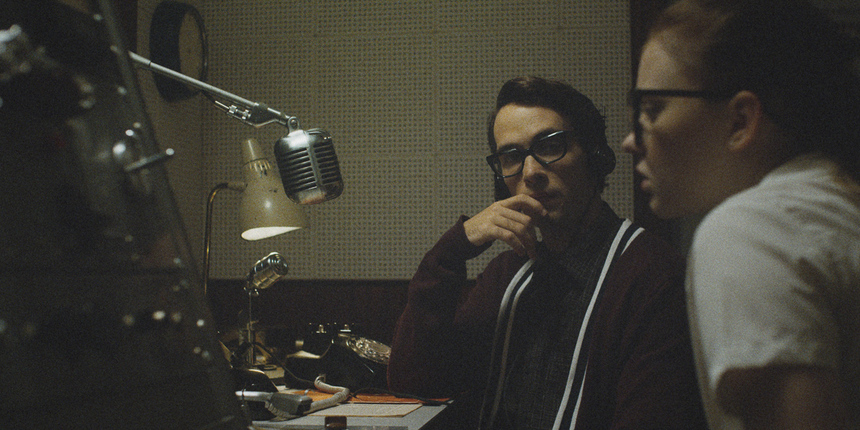 One of the most difficult things to render in cinema is listening, especially if the speaker isn't in the room. How do you keep the audience focused not only on the off-screen speaker and their story, but also on the listener, who must convey whatever the necessary reaction is without taking away from that audio. It's a delicate balance, and part of what makes The Vast of Night, Andrew Patterson's feature directorial debut, a riveting tale.

Set in the 1950s and framed as an episode of a Twilight Zone-like television show, The Vast of Night follows Fay (Sierra McCormick) and Everett (Jake Horowitz), two teenagers in Cayuga, New Mexico, as they investigate a strange signal and unwittingly seem to uncover an alien conspiracy. While just about everyone in town is at the high school basketball game, as evening switchboard operator local radio DJ respectively, Fay and Everett are among the few with the means to piece together this odd and terrifying puzzle.

Screenwriters James Montague and Craig W. Sanger have crafted, in many ways, a radio play, onto which Patterson has layered a visual interpretation.  The opening is both smooth and frenetic, as we meet Everett helping to set up the high school with its annoucement equipment, while Fay asks for his help working her new tape recorder. In an amazing series of long takes, Everett and Fay walk through the gymnasium, and then through town to Fay's work, as Everett teaches her how to interview people.

You can't always hear what they're saying, or laugh at Fay's mishearing the word 'breaker' as 'bacon', but these are subtle hints to what is necessary in the art of listening, and the seeming fast and possibly confusing opening serves two very important purposes: it gives us a great introduction to the main characters and small-town setting (50s America, very white-bread even as it's close to the Mexican border, the importance of high school sports), and preps us for the space and time we need to absorb what's going to happen next.

For now comes the sounds, and the listening, and the detective work. There is an incredible scene where Fay is fielding calls to the swtichboard, but one strange one comes from a woman outside town who says she sees something in the sky; then there is a strange sound, then nothing. As Fay tries to figure out what's going on while fielding calls and relaying information to Everett, all the camera does is focus on her. We watch as she listens, and as she does her job: these small physical efforts - not just pushing a digital button, but physically moving cords and flipping metal switches- gives form to what she is listening to, and form to how she is listening.

This is followed by a pretty phenomenal tracking shot that seems to go for miles, from Fay's switchboard ot Everett's station, where it is his turn to listen to a story from Billy (Bruce Davis), and Patterson takes how we listen to another level, by giving us a black screen in parts. This is a brazen move by such a young director, but it pays off, again, in not only what we are listening to (and Davis does an amazing job), but how we listen.

I'm in danger of revealing too much about the film; suffice to say Patterson moves between moments of listening, where the story builds and a conspiracy slowly revealed to two young peole who don't know what to do with such knowledge, and frantic moments that both harken back to films about the cold war and conspiracies and films about what lies beneath (or on this case above) a seemingly sleepy small town). With a strong script at its base, Patterson layers on the sense of space and time, both immediate and metaphorical, to understand those immediate and metaphorical dangers that come from the possibility of knowing that indeed, the aliens have landed in this ordinar town.

Thought the framing device of the fake television show is more distracting than intended (and really unnecessary), the script, performances, and deceptively complex use of long takes and drone shots make The Vast of Night one of the most accomplished films of the year, one that takes a story we think we've seen before, and gives us fresh eyes to see it with, and more importantly, fresh ears to hear it with.

More about The Vast of Night