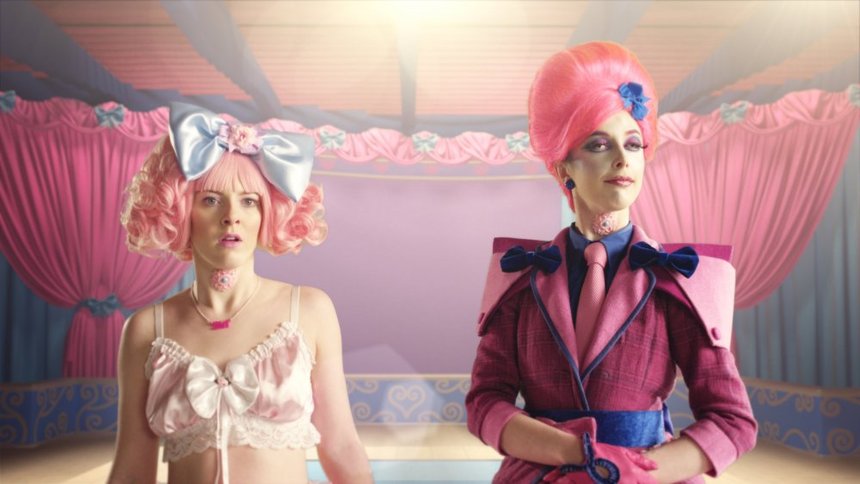 Combining archival audio footage, science fiction, cultural criticism, and reality television parody into a film, and Scottish multimedia artist Rachel Maclean's feature Make Me Up weaves a complex and at times overwhelming tapestry as a biting feminist satire. Juxtaposing bright pastel colours and costumes with dark and disturbing imagery makes for an incredibly well-detailed story of entrapment, expectation, and rebellion.

Thinking she was just going in for some (unnecessary) plastic surgery, Siri (Christina Gordon) finds herself in a reality television show from hell, where she and nine other girls must compete for - well, it's never explained exactly what the winner will get. But they are forced to dress in Kawaii-style outfits of the most garish pastel colours and frills; their voices have been modified so they can only speak when allowed; and each day they participate in a kind of contest that will eliminate one of them. The one with the most points is the only one who gets to eat that day.

Certain it's obvious quite early that Maclean is using this imagery - girls who can't speak, look like baby dolls, imitating famous paintings - to satirize and critique societal and cultural attitudes and ideas of female beauty. But the combination of style and specific content raises the film above what might have felt a bit tired into something so bizarre, fascinating, and deeply uncomfortable that it can't be ignored. Using archival audio footage of British art historian Kenneth Clark's show Civilisation and rearranging the words of images of women in art and their conformed femininity. Coming out of the mouth of a robot pedagogue (Maclean) makes it all that much creepier.

This male-canon ideological (and very occidental) perspective on the female form provide Maclean with a starting point for her audio-visual landscape, one which distorts idea of the ideal form into a sugary perversion. This is in addition to constant surveillance; and not just any surveillance, but the kind that expects the contestants to exhibit certain emotions: happiness, of course, but even sadness if it acquieses to power; fear is also enjoyed (surprise, surprise).

At a certain point, the film risks being a victim of its own success. The imagery is almost too overwhelming at times: there is so much to be absorbed and understood that subtleties can be missed, and the message lost in its grandiose execution. Maclean attempts to right this at the end, by having the contestants (like the pedagogue) lipsynch to other audio archives on women and feminist ideology, from Cilla Black to Emma Thompson to Margaret Thatcher to Rose McGowan to Amy Poehler. This varied list speaks well to Maclean's knowledge of the various strands and attitudes towards feminism, as she doesn't shy away from the more startling and negative atttitudes sadly proposed by some women.

But there's never a dull moment in Make Me Up, even if it at times risks its message getting lost. With such detailed and impressive design, attention to nuance, and message that doesn't hold back, Maclean's not-so-subversive version of art history and its affect on women has no qualms about biting back.