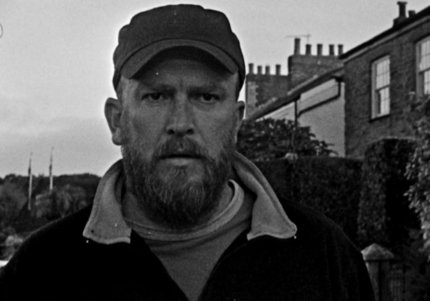 One of the main things I miss about print film is the texture; there is something about how an physical object, going through a projector, conveys the layers of physicalness necessary to create it. It conveys as much for the story in the film as the plot and characters, and expresses how we are meant to view and understand. Such is the labour and beauty evoked in Mark Jenkin's first feature-length film Bait, a remarkable achievement both technically and in story.

Martin (Edward Rowe), a fisherman in a small Cornish village, is without a boat, as his brother Steven has repurposed theirs to take tourists around the bay (far more lucrative, if seasonal, work). In addition, he has been forced to sell his house to Tim and Sandra, weekenders from London, who now own much of the surrounding property, given over more to those who spend only little time in a now-fractured community. Meanwhile, Tim and Sandra's daughter Katie has taken up with Steven's son Neil, much to the chagrin of her brother Hugo.

Martin sees his once-proud and prosperous village falling apart: he argues with the pub owner for closing up in winter, leaving the village without a social hub during that time; he argues with TIm over street parking (necessary for Martin to do his work, nothing but an 'eyesore' to the new homeowners); he argues with his brother over the use of the boat for drunk stag weekends; he argues with pretty much everyone, but it's hard to blame him. Maybe the village has 'moved on', but he, and others like him, are left behind, barely able to scrape together a living, forced aside in the austerity economy to be forgotten.

Jenkin shot the film on a Bolex 16mm camera, hand-processed the film, then added all the sound and dialogue in post production. A labour of love, indeed, and one that pays off: it evokes a feeling of early Flannery documentary style to the British social realism/soap opera-esque tale. The use of the overlayed sound gives the story a feeling both of a haunting (as if it was a later person trying to interpret the words and the noise), and a sense of the despair in this place where nothing is as it was, where traditions are irrevoc ably and sadly lost, and even the news things just don't sit right. Like the village, like Martin's life, nothing is quite in synch anymore.

But the story, like the process of making the film, is far from black-and-white (though the film itself is, in all its grainy beauty). The bourgeoisie might have bought the homes of the local fisherman, but at least the homes are occupied; Martin might be clinging to a way of life in vain, if there is no demand anymore. Some villagers display an unnecessary hostility outsiders; then again, when Hugo destroys one of Martin's lobster traps, his anger is justified. Nothing was ever perfect in this village, though it may be worse now. Jenkin's technique keeps the audience in a (deliberate) uncomfortabel position, keeping us intrigued through the tight shots, editing that forces us to confront the good, the bad, and the understandbly angry, and likely see ourselves mainly in those interlopers.

An evokative tail of class struggle, economic hardship, love and sibiling rivarly, evoking not only Flannery, but Einsenstein, Loach, Ramsay, and others who have focused on the plight of the working classes, Bait is nonetheless a unique work, utilizing a modern story with older techniques, and a visceral quality through its arduous creation.