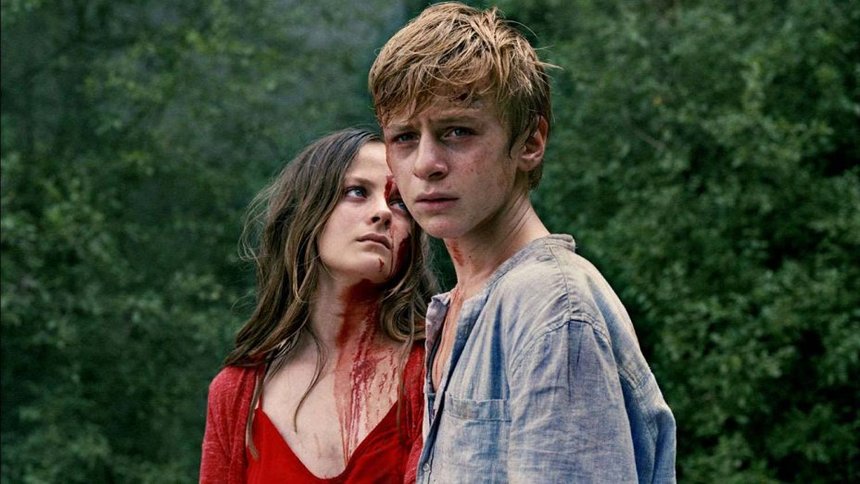 British author Evelyn Waugh once wrote that there is a kind of love that children have before they know its meaning, something sweet and innocent, full of kindness and joy without facade or self-awareness. As children grow into teenagers, what that love is and how it changes as knowledge and understanding of sexual interest desire come creeping forward. The exploration of this burgeoning love can be sweet and tender; or, if one of the couple has some problems, it could be violent and even homicidal. Or at least, once it gets into the hands of Belgian auteur Fabrice du Welz.

The third part of what is said to be his Ardennes trilogy (the others being Calvaire and Alleluia), Adoration follows on these with its representation of deep and obsessive love that manifests in some terrifying behaviour. This time, he abandons the cynical adults for hopefully teenagers, somewhat innocent and yet each reacting different to the adult world that doesn't seem to want them: one with care and shyness, the other with rage and blood.

Paul (Thomas Gioria) is a shy and fairly newly teenaged, navigating the world mostly alone. He lives with his mother on the ground of the psychiatric hospital where she works, and spends much of his time with the birds that he cares for. One day, he spies Gloria (Fantine Harduin) screaming and running from her nurses. He learns that she has some serious problems, and even though they start talking, he is told in no uncertain terms that he must stay away from her.

Well, what would you do if you were a young teenaged boy and told to stay away from a pretty teenaged girl? We first meet Paul as he is caring for an injured bird; his gentleness and tenacity then transfer to Gloria, who tells him she is being kept against her will, so her uncle can have access to her large fortune. Paul and Gloria's first tentative steps reach a deadly climax, and suddenly they are on the run, with a supposed destination, but so many kilometres that their journey becomes their destination.

Du Welz and his camera follow Paul and Gloria through forests and down rivers. As their love blossoms and grows from a small seed, so does du Welz explore the growth of that love like a plant, or perhaps more accurately, an animal. The young duo slowly explore, with light touches and small kisses. It may seem at first that Gloria has some 'experience', but with both of them, it seems an exploration of what they have heard that people do, and they are at their most loving when their childrens' masks are tentatively set aside (somewhat reminiscent of the relationship between the main characters in Let the Right One In, also about a young boy who rescues a 'young' woman with a secret).

But the natural world is not all serene rivers and tranquil forests. It is wild, inconsistent, and dangerous. Gloria might not be wrong about her uncle, but her instability becomes clear after a few days off her meds. She suddenly turns on Paul, injurying him (but is quickly apologetic). Paul is too young to know how to handle it. They spend a few days with a kind couple, who seem to be a reflection of what Paul and Gloria could become, but Gloria turns on them as well, increasingly the ferocity of her violence. As the rain increases, and the sun gets hotter, and the land more difficult to traverse, so Paul finds himself in over his head, but he is also head over heels in love, and sometimes the only way to deal with a mad person, is to join them.

Giori and Harduin are incredible in their roles, finding that balance between the innocence of childhood and the pressures of adulthood, that moment when you have knowledge but not maturity, and you can feel the strength of their attachment and fear for them at the same time. Adoration is, as the intense and mad love its portrays, beautiful and disturbing. It finds that organic growth of young love and follows it as it grows beyond its confines, bypassing a more ordered nature to something chaotic.