Apart from some fun moments, Kobayashi Yûki's splattergore reboot never really gets off the ground. 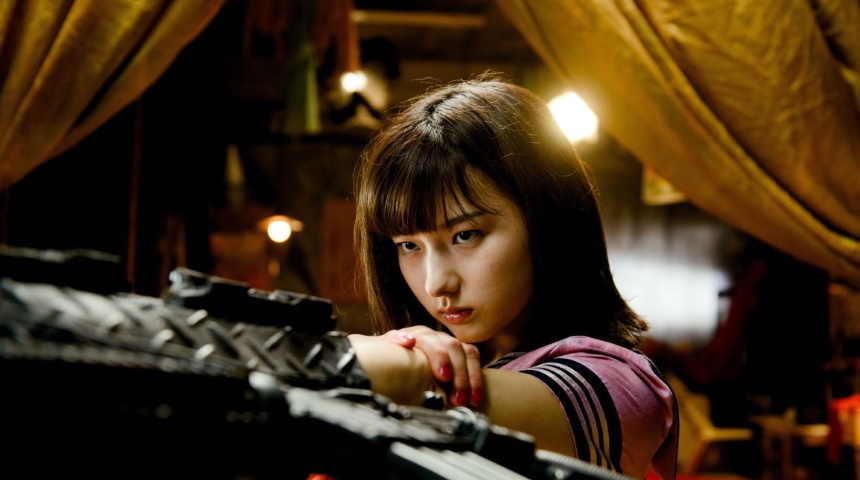 Back in 2007, our site got one of its highest traffic spikes when we hosted the outrageous trailer for Iguchi Noboru's The Machine Girl. For many people, it was their first exposure to Japan's bloody splattergore genre. And when the film itself arrived, it fulfilled that trailer's promise of rude comedy, ridiculous action, and gallons of fake blood.

This year, we're getting a new Machine Girl film, a reboot of sorts called Rise of the Machine Girls. It's directed by Kobayashi Yûki, and is slated for release in Japan on November 22nd. Screenings can already be caught at film festivals though, and the Netherlands-based Camera Japan Festival is one of them. I attended a midnight screening with friends and was...

... was ...well, entertained. But not exactly blown away.

When Iguchi Noboru's The Machine Girl arrived it was fresh, new. You literally had never seen anything like it before. Now, we've had twelve years' worth of these films, and frankly, they began getting stale after a few years already. Each of us here at Screen Anarchy has his or her favorite (mine is Vampire Girl vs. Frankenstein Girl), and now and again a title will manage to poke up and be noticed. But last year's bonkers Kodoku Meatball Machine brought the sub-sub-genre to its very edge of watchability, and I already wondered (not for the first time) if it should have been the final one. 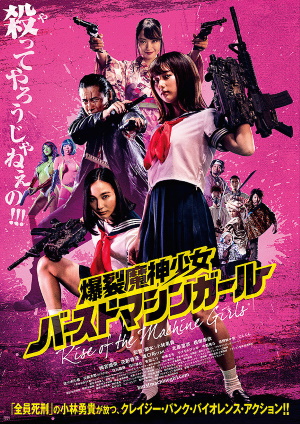 So here is Rise of the Machine Girls, and what does it bring that The Machine Girl didn't have? An almost apocalyptic setting, some amusing monsters, some dodgy CGI, and Tak Sakaguchi. He plays a drug-addicted drifter who turns out to be a rogue member of a band of assassins who kill by way of ricochet. Ok, Tak is cool. It's kinda hard for him NOT to be cool. Needless to say he steals several of the film's best moments just by being there in a supporting role.

The story, for what it's worth, is about Ami and Yoshie, two sisters living in a ghetto for people who have had body parts sold off to a nefarious body-modification company. One of the sisters misses an arm, the other an undisclosed number of internal organs. Traded for money by their parents, the siblings yearn for a better life... and revenge. Secretly, the sister with a missing arm has made a prostethic battle-limb with guns and knives, and fights the evil organ harvesters in her free time. One day she gets caught though, so the other sister has to start modifying herself to wage a final battle and save them both.

So far, so good, and as a skeleton to hang scenes of copious bloodletting and pantsu-shots on, it works. But Rise of the Machine Girls never manages to get truly memorable, and that is a shame. The cool parts in it are short, and few and far between, especially notable when held against Iguchi Noboru's original film. Rise of the Machine Girls wears out its welcome in 75 minutes, and in this genre, that's a disappointment.