Blu-ray Review: Experience the Greatest Gooey Mess Ever in THE BLOB 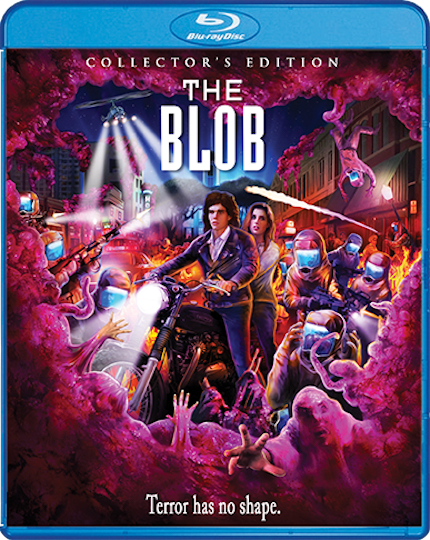 That means for most of us, it's a spooky or scary day to watch a creepy movie and enjoy the holiday. Some of watch films of this ilk all October or even season. And for a smaller segment of us, everyday is Halloween.

Today we're reviewing the 1988 version of The Blob, directed by Chuck Russell (The Mask, Nightmare on Elm Street: Dream Warriors).

Kevin Dillion (Platoon, The Doors) and Shawnee Smith (the Saw franchise) take center stage as two teenagers caught in the middle of a very strange night. A meteor crash lands on earth and unleashes some killer goo. Said goo eats and kills lots of things, and gets bigger, eventually menacing the entire small town.

This version of The Blob is a ton of fun --- particularly for the awesome practical effects. Any bonafide moster kid loves this movei, and for good reason. It's just so much damn fun to watch the blob destroy everything in spectacular fashion, directed by Russell with assured suspense.

The film looks and sounds utterly fantastic. If you've been yearning for the best-ever collector's edition Blu-ray release of The Blob, this is it.

By the way, just look at this. Look at it. That's right, the special features are a Halloween bag full of treats, so many, many treats. Some interviews are better than others, but that's just how it goes. I always love interviews with cinematographers and special effects artists, and this is no different.

It's going to take awhile to get through all the interviews and bonus material, but in most cases, it's worth it to hear some of the recollections.

You know you want it. Add the 1988 remake version of The Blob to your home collection by heading over to Scream Factory's site here.