A counter-ageism love story in the clothing of a deadpan idiosyncratic comedy. 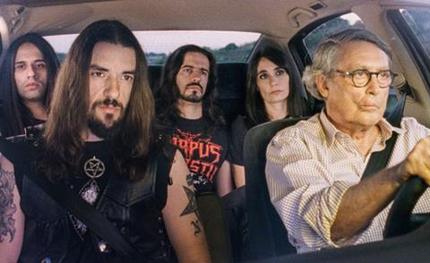 The latest film by the Portuguese auteur João Nicolau, Technoboss, falls into the category of film festival oddities with a cult film predisposition. The peculiar style of Technoboss is close to an anti-film poetic, as Nicolau channels Quentin Dupieux in lo-fi surrealist and deadpan staging.

What remains of a linear storyline can be summed up as the struggles and delights of a septuagenarian Luís Rovisco, divorced, alone and about to retire from his job as a commercial director of Segurvale. (Saying the whole name of the company, Segurvale Integrated Systems of Access Control, soon becomes a running gag.)

Rovisco drives around a car tending to his customers and puts up with what he considers sabotage from his colleagues until he meets a receptionist named Lucinda, an old flame. The condensation of almost two-hour running time sounds like a love story veiled as an existentialist tale. That is the shortest and easiest description of the fairly perplexing film experience.

The director reveals he created the film while surrounded with "a set of conflicting, or outright impossible aspirations," among them a story about a man in his sixties suffering from excessive youth, to make a film where the protagonist sings a lot but the film is not a musical, to make a film where the protagonist is in a car but the film is not a road movie, "to make a film set within the world of work but which doesn't set out to interpret it morally and which, above all, doesn't make a single reference to any reality outside the film" and to make a film in which all these "aspirations" are in service to a love story. 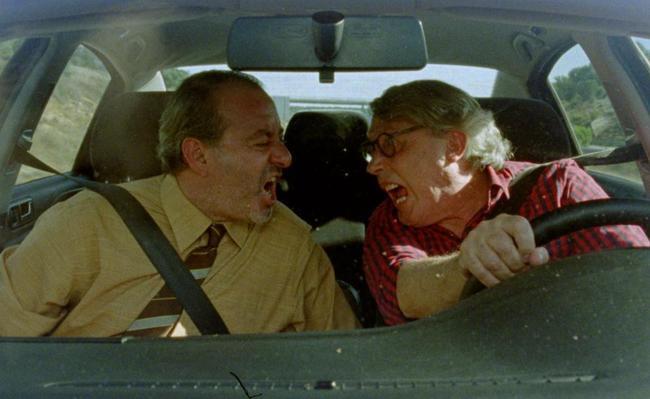 While Nicolau achieved all the quirky aspirations he set out or was surrounded by, his style and staging inclinations suggest he is more interested in the form than the substance. Technoboss looks like an audiovisual project carried out by a theatre buff. Despite the film's retrograde aesthetics and imagery, the composition, performances, and angles appear to be inspired by the theatrical tradition.

At several points, Nicolau makes a statement about the artificiality of the film's world in a sort of Brecht-inspired alienation effect. During a scene shot on location, the director inserts the exact scene, albeit re-acted and re-staged in an acknowledged studio shot, lacking the depth and texture of supposedly real (on location) - a simulacrum of the original shot.

Actors continue in their dialogue and action unfazed about the change in a seamless transition of the theatrical and cinematic worlds and their particular aesthetics, as Nicolau (as the editor) along with Alessandro Comodin wedge the "fake" shot into the "real" sequence.

The protagonist, portrayed by non-professional actor Miguel Lobo Antunes in his first film role -- a lawyer by vocation, he was the director of the Portuguese Film Institute -- remains the front and center of the film, a steady fixture of almost every frame, remaining unfazed no matter what comes his way. 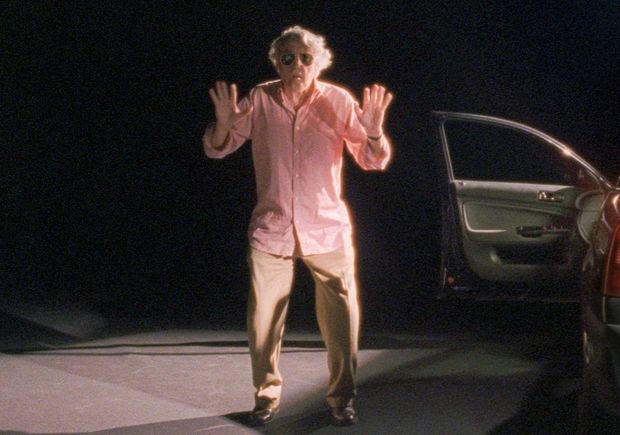 Antunes embraces the film's general deadpan style in his performance, moving with a bit of detachment yet letting occasional flashes of playfulness bubble to the surface. While his body and its dispassionate choreography directs the space, he keeps his verbal performance going, as if caught in a soliloquy purgatory, peppered with impromptu singing. Nicolau makes the singing numbers an integral part of the highly stylized and tightly-controlled aesthetic ecosystem that DoP Mário Castanheira frames.

Castanheira coats the narrative into a vintage patina while shooting in 16 mm and 1.66:1 aspect ratio. Roy Andersson's Songs from the Second Floor (cinematography by István Borbás and Jesper Klevenas) has the same ratio, however Technoboss' action is mostly relegated to the foreground. The grainy image and washed-out colors underline the film's anachronism, emulating an antiquated look. Similarly, the protagonist entertains rather low-tech skills or high-tech skills from a different (stone) age, soon losing patience with the new technology capitulating over a stubborn barrier.

Technoboss, as several other oeuvres in this year's Locarno line-up, belongs among the odd cineaste treats. Combining the vintage look, deadpan delivery and strange musical numbers creates an aura of absurdity. However, even though Nicolau's musical road movie about a traveling elderly almost tech-guy might brush shoulders with Dupieux's wacky oeuvres, Technoboss remains in its heart a hopeful, yet idiosyncratic love story, and an allegory deflecting ageism.