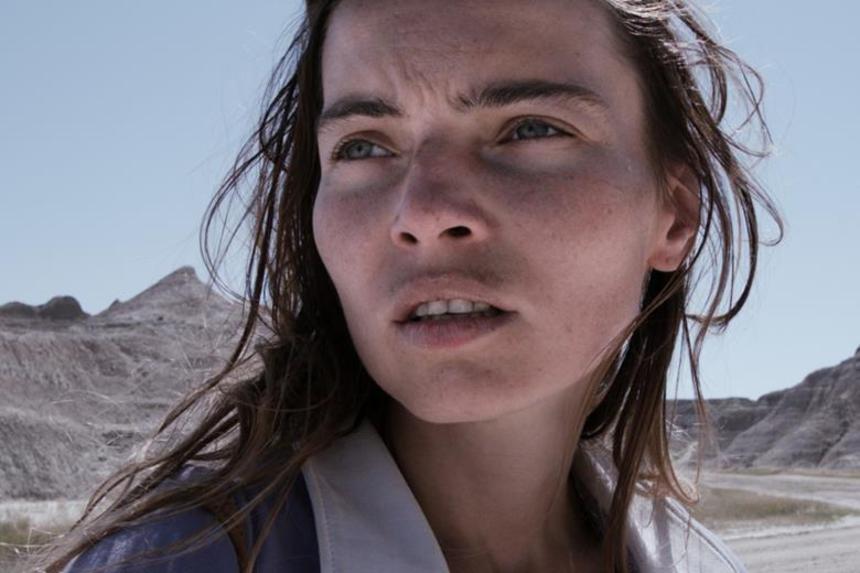 What would you do if you were in a foreign country, where had no money, did not speak the language, and could not find work without the necessary proper documentation? Would you go to your country's embassy to ask for help? Would you work illegally until you could save enough for a flight, or even remaining in that country illegally for as long as you don't get caught? What would it mean to be truly isolated, to have to make your way home through no efforts but your own?

None of what would seem to be viable options for the naive yet (mostly) single-minded Lillian (Patrycja Planik). A Russian tourist in the USA, she has overstayed her visa; unable to find work even doing hard core pornography, the man who interviews her advises her to go home. And so Lillian starts to walk: first out of Manhattan (not easy as a pedestrian) where she breaks into someone's home, finds some food and a map. She might not understand english, but she knows that it's just a short boat ride between Alaska and Siberia. And in her naivetée, with only some loose change and rather inappropriate attire, she starts walking. And she intends to walk all the way to the edge of Alaska, however long it takes.

Lillian is loosely based on a true story of a Eastern European woman in the 1920s who walked from New York to Alaska in order to cross to Siberia (albeit she walked mainly through Canada); it is unknown if she ever reached her destination. This is well-known photographer documentarian Andreas Horvath's first narrative fiction film, and he brings that sensibility to a story that is both extraordinary and unbelievable, more so for having actually happened.

A minimalist and heavily improvised production (with Horvath taking on much of the cinematography), Lillian's journey is as much about seeing how American has changed in the early 21st century, and how it the farther west you go. Horvath takes his cues from the land across which his character is traveling, and when. Lillian begins at the beginning of summer, across the east and mid-west: green fields, farmland, rivers and lakes. She can sleep outdoors with little danger if she is in an isolated place, but she can also find the occasional thrift store or laundramat from which to steal needed clothing. She seems somewhat indifferent to her surroundings, taking them in only to see what will be her best route. Most days are sunny and pleasant, and the score seems to come from Lillian's mental and emotional state, keeping her moving as she checks her map to see how much farther she must go.

Planik plays Lillian as both somewhat innocent (in that she truly believes she can make this journey) and at the same time focused. Horvath asks the audience to suspend a lot of disbelief throughout the journey: Lillian would likely find herself in far more dangerous situations than what is presented, in her frequent thefts and as a woman traveling alone in a country where 'walkers', those just walking with no apparent destination, are seen as suspicious. And we are angry at Lillian for putting herself in danger, as much as she worms her way into our subconscious and we become her, feeling that emptiness and cold the farther she goes. And she is literally silent: not one peep, wimper, gaffaw or scream exist her lips. Planik gives us Lillian through body and facial language alone, so she remains both a fascinating enigma and a figure onto which we can project ourselves.

It is not just physical and geographical America that Lillian travels through, but cultural. Given her linguistic separation, Lillian remains apart from everyone she encounters; she is an ignorant and mainly uninterested observer, and so we see what she does not: the prevalance of militant christianity, the slow disintegration of the midwest and its communities through so many abandoned homes; some people who are helpful to the stranger, but most people who are suspicious or indifferent. In one telling scene, Lillian wanders into and around a rally of Indigenous people who are fighting pipelines through their territory. She has no understanding of the words and merely partakes of the free food; but we, the audience, do, and so we are taking in America in a way that she cannot.

But the farther west she goes, the more this shifts into uneasiness, first with her almost dying of heat and exhaustion in the badlands, then as she goes more north and the months pass to winter. There are fewer people about, more dangers from wild nature and wild animals, too many stretches of nothingness, and eventually, not even roads to get her to her final destination. The film moves away from script observation and more to direct reflection of Lillian's increasingly erratic state of mind and body: her determination has not flagged, but the journey weighs on her, and she literally disppaears into layers of clothing as she literally and metaphorically disappears into the wilderness.

What begins as an insane yet necessary journey from A to B becomes something of an intimate and experimental epic, one that asks for intimacy and our attention to details, as well as our attachment to a strange woman. Lillian is an outsider's journey through and view America, in its loneliness and emptiness, in its compassion and its indifference, and in its beauty and uglyness.

Do you feel this content is inappropriate or infringes upon your rights? Click here to report it, or see our DMCA policy.
Andreas HorvathL'Etrange 2019LillianPatrycja Planik