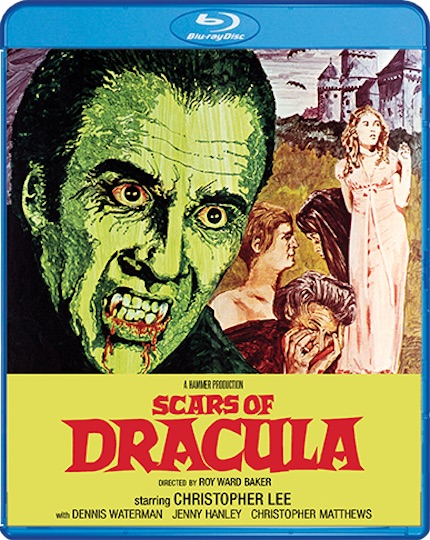 Out this week from Scream Factory comes Scars of Dracula, another old favorite in Hammer Film's back catalog. I was happy to receive this disc for review, since I'd never been able to catch this movie anywhere before.

Directed by Hammer stalwart Roy Ward Baker (Quatermass And The Pit, Dr. Jekyll And Sister Hyde), Scars of Dracula is essentially (in my humble opinion) a reboot of the tried-and-true Dracula story, but with a shocking (and hilarious) 1970s sensibility. And what an interesting film it is.

I mean... have you ever seen Dracula stab anyone? Oh, but you will, and it's insane. Christopher Lee is back as Dracula, and in a very strange iteration of the character. Unlike the previous incarnation, Dracula is far more talkative, for one. But there's a vicious violence here, too. When Dracula gets upset with his vampire bride, he doesn't cast her into sunlight or stake her (back) to death, he just lets loose with a fancy dagger and straight up STABS her to death.

It was hilarious and honestly, a bit shocking, if only because I've never seen Dracula get so gangsta. In vampire lore, there are a few ways to cast one of these unholy creatures back into Hell... but stabbing is not one of them. If nothing else entices you to see Scars of Dracula, this scene alone might do it.

Anyway, I've gotten ahead of myself. Scars of Dracula is a bit like Hitchcock's original Psycho in the fact that we start out following one protagonist, who's dispatched, and then we're onto another --- or in this case, a couple.

Running from the local law after getting too friendly with a woman, Paul (Christopher Matthews) is refused a room in a neighboring town's inn and tavern. From there, he seeks out the castle, which is of course where Dracula lives. Bad idea, he gets murdered, and so does that other vampire.

From there, couple Simon (Dennis Waterman) and Sarah (Jenny Hanley) go searching for Paul. They track him down to Dracula's castle, where Christopher Lee is up to no good. We get a version of Renfield named Klove, played by Patrick Troughton (Dr. Who, The Omen). Klove is interesting because he runs from dastardly to having a heart --- he helps the couple and is literally branded by Dracula for it (while Lee looks on in evil glee).

With the exception of a few grainy scenes, this release of Scars of Dracula is likely the most pristine the film has ever looked since its original release back in 1970. It's beautiful, and the sound is great. The disc also has two different aspect ratios to choose from, as well as featurette, and a few commentaries, one with Lee himself. I didn't get to listen to that yet, but I bet it's entertaining.

You just have to see this one if you're a Hammer fan, or just love weird movies. If you'd like to check out the trailer and add Scars of Dracula to your home video library, head on over to Scream Factory here.