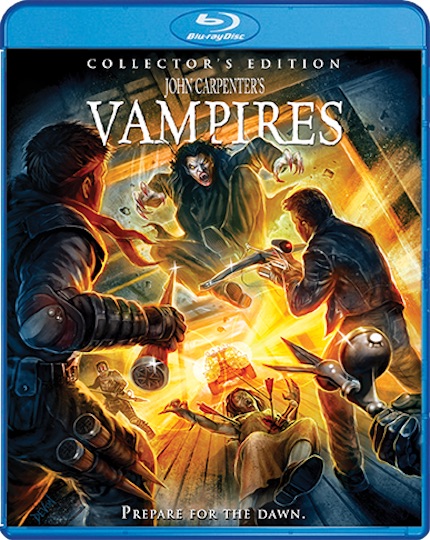 Shout Factory's horror imprint Scream Factory add another of John Carpenter's back catalog of films to its roster for release next week --- 1998's horror western Vampires.

As with a lot of Scream Factory's John Carpenter Blu-rays, this release has an awesome amount of feautures included on the disc. All of the interviews were engaging, and I particularly loved the interviews with Carpenter himself, as well as with special effects master Greg Nicotero (Creepshow, The Walking Dead, and nearly everything else awesome in horror).

Vampires stars James Woods as Jack Crow, a pissed-off, alpha male vampire hunter who leads a pack of vampire hunters whose team is destroyed by a master (Thomas Ian Griffith as Valek). The practical special effects are pretty gnarly and still impressive. There's a great gag when Valek shows up at the Sun God Motel where the team celebrates their latest nest kill, and where most of them meet their end. Don't worry, this is near the beginning of the film, so it's not much of a spoiler, but moreso the inciting incident that puts Crow on his hellbound path.

Joining Crow is his right hand, Montoya (Daniel Baldwin), and the always-excellent Sheryl Lee as Katrina, a woman turning after being bitten by Valek (Twin Peaks). Crow and Montoya use Katrina as a sort of homing device to track Valek, as the two are psychically linked.

What follows is the adventure in trying to catch the master vampire before he gets ahold of the Black Cross, which has to power to allow him and his bretheren to walk in sunlight once more. Although Vampires feels a little long, it's an ultimately fun popcorn flick with heavy western elements.

The film looked absolutely beautiful, and while the sound was good, it was better at some points than others. I found it a bit muddled in the mix in a scene or two, and I had to ride the volume button constantly. Vampires is one of those action flicks that creates very loud scare and action hits, and while that's great for a theatre experience, it can be a bit more jarring at home.

It was cool to also check out the vintage making-of featurette of Vampires, which was released back in the day, and has even more interviews, on set. There's also commentary and an isolated score, because Scream Factory knows that Carpenter fans also love his kickass music. If you can ever see him when he tours, playing scores while scenes from his films screen overhead, you'll know exactly what I mean.

Interested in adding to your John Carpenter Blu-ray collection? Do it! Head over to Scream Factory here.