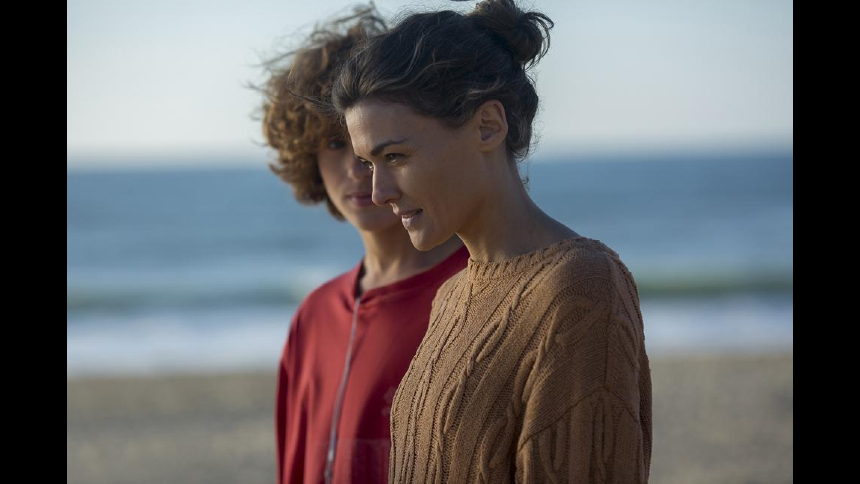 With a background mostly in Spanish TV, and more recently features, writer-director Rodrigo Sorogoyen is a man who definitely knows how to grab your attention. Unlike me, you shouldn't write off this Spanish-French coproduction simply because of its painfully unoriginal title. Underneath that bonnet, Madre has an engine that will take your background residual anxiety from 0-100 at least 2-3 times - and in a good way - whilst propelling you on a pretty fascinating rollercoaster inbetween.

Nor should you be put off by the fact that Sorogoyen has essentially taken what was the premise of his 19-minute 2017 short (also titled Madre), and puffed that to what could seem like a bloated 129 minutes. The director clearly chanced upon something golden in that short, because he bolts its premise almost unchanged onto the opening of this feature and kept on the dark magic of its lead actress, the incredibly talentend Marta Nieto.

Like the short, Madre opens unassumingly in a stylish, open-plan home in Madrid. The walls are white-washed, with faded exposed beams, and trendy, minimalist furnishings sit here and there. A mother and daughter burst in through the front door from a trip to the shops. The mother slowly verbally drops a series of cheap shots at how her daughter Elena conducts her life, and you begin to ask yourself what you've gotten yourself in for. But out of nowhere comes a call to Elena's mobile, shrilly cutting its way through their conversation...

On the other side, in a voice-over, we hear the unmistakable voice of a young child. She beams, and we're immediately strapped firmly into her perspective as she moves round the room and coos affectionately over her young son. Mere seconds later, the bomb drops. On a holiday with his father at some secluded corner somewhere the northern coast of Spain meets France, the boy announces that he does not know where his father is. He had gone to fetch toys, and now has been gone for an amount of time the child is too young to tell.

Madre as a feature slowly comes into its own. It pans and tracks its way at speed round the now ever more claustrophobic flat, and Nieto careens back and forth with her utterly distinctive skulking strides. Often the lens sits low and in front of her, with a sort of fish-eye effect, making the world seem like it's owerwhelmingly enveloping her as she assertively (and yet at the same time powerlessly) struts towards us into the middle of the frame. The impact is maddeningly intense, alarming and yet powerfully relatable somehow.

Plus it gets worse: we hear a bleep at the child's end of the line - again unmistakably communicating that the battery of the mobile he has been left with is rapidly coming to an end of its life. With ever greater animatedness, Nieto fires off her panicked questions with a speed that only latinate-speaking actors will ever know, and her performance is genuinely worthy of awards given how much it sucks you in.

After a failed attempt to elicit any help from the police, the young mother gathers what little possessions she can, tells her son she's coming to save him, and bundles out her front door, slamming it on a now speechless grandmother behind her. Madre then makes a returning cut to a seemingly impossible Atlantic landscape that filled the open credits.

On a narrow strip of gloomy, sandy coast, the waves seem less to lap and more atmospherically shift up the beach like some kind of thick, ominous fog. And the crashing background sounds of the sea gradually unbearably crescendo. This, we assume, is the harsh, shifting landscape in which her son is lost; and thus ends the premise of Madre in short form.

So where does one take such a narrative tsunami for a further 109 minutes? In his director's statement to the Venice Biennale, Sorogoyen stressed that he was committed to 'moving away from the thriller aspects of the short film,' and he has certainly achieved that. In the place of thriller conventions, comes spades more of this otherworldly French coastline and something much more in the direction of an indie drama.

The premise becomes much less one of an explosive real-time reaction to events, which at times feels not unlike Sebastian Schipper's Victoria in terms of its spiralling sensation, and much more a long-form study of what an event as horrific as being unable to save your six-year-old child would really do to your psyche long-term.

As a result, the feature's storyline comes back in 10 years later, with the young mother Elena retaining her wiry good-looks, but taking on a frazzled, burn-out hint of stress-induced greys around the edges. With every shaken fibre of her being, she's upped sticks and relocated to a godforsaken strip of France's coastline - in what we assume is an unrelenting continuation of her search for her missing son. She works a thankless job as a manager in a touristy seaside bar, and seems to have retreated entirely from the world into herself, except on the occasional visits from her understanding Spanish boyfriend Joseba.

The gloomy, stark cinematography that Madre lends to its costal landscapes and rows of holiday homes perfectly captures Elena's lifeless, yet anxious depressive vigilance. And it brilliantly and patiently establishes a new mood and tone. That is, of course, until a floppy-haired teenager called Ivan (Jules Porier) enters the frame on a surfing summer holiday, breathing hope, life and sunshine into the picture.

Of course, the care-free, curly-haired Ivan reminds Elena of what she imagines her son would look like now, and she finds herself utterly compelled to find out more about him. Indeed, the teenager does almost look potentially a touch more southern than his friends or family, and a thriller intrigue returns as we begin to wonder whether she might indeed have found her son again.

This is where a relationship opens between these characters that may truly divide how you feel about the film. The questions are constantly there: Could this be him? Will Ivan at any moment confirm a mysterious past? Does Elena actually think he could be her son, or does it even matter to her any more? And slowly, perhaps ever more importantly, you're forced to ask how Ivan independently sees this rapidly growing closeness with this random, enigmatic older woman.

In truth, Madre meanders up the shores of some pretty taboo subjects, and some of them are definitely downright problematic. Certainly, the hand of a male director does seem to be quite tangible, as moments of the camera's attention and attitude towards its female leads definitely suggest a male-centric gaze and logic. This is definitely at times a flaw.

But at the same time, I do think parts of this male-centricity amount to a comment on how much a world can harm and betray a woman, rather than necessarily being completely unthinking mistakes by Sorogoyen. Similarly, I think Madre also sparks some interesting questions as to how you might see this whole film completely differently if Elena's role had been converted to that of a father.

All in all, I definitely think Madre is never just crassly taboo. The essences of taboo always serve an absolute purpose of making you question how much you could ever really know what it would be like to be in Elena's shoes, or how on earth you would react or come to terms with what happened to her. And whilst the 129 minutes are perhaps too long, Sorogoyen's ability to repeatedly accelerate into moments of absolute panic (even in scenes outside the original short) definitely brilliantly resuscitates your passion for this film.

If you like intrigue and high-stakes, all-or-nothing acting, this film is definitely for you. Let us hope that Nieto's gear-changing performances gets the attention they deserve, too!