Review: GWEN, Bleakness and Betrayal in the Welsh Hinterland 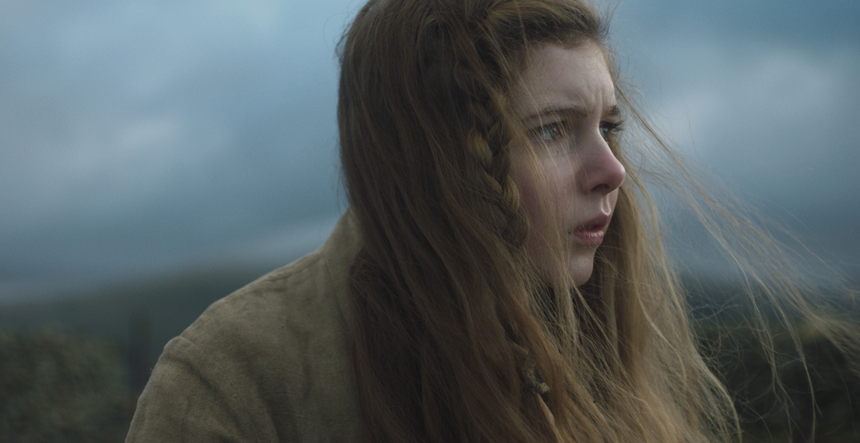 The clouds never seem to leave the sky in the peaks of Wales; the wind is almost constant, either in a slow track or relentless howls; and even moments of beauty found in the craggy low mountains hide sinister things both natural and perhaps supernatural, as the local folk are trapped between these clouds and the unforgiving earth, as well the edge of starvation and the local barons who care for their pocketbooks and little for the lives of those below them.

Gwen, Willian McGregor's feature film debut, tells a story both of its time and place, and yet at the same time dealing with a story and themes that continue to be repeated not only in places such as Wales, but anywhere where the poor and isolated and preyed upon by the rich and their own superstitions. There is a darkness that won't go away, both in the story and atmosphere.

In 19th century Welsh countryside, teenaged Gwen (Eleanor Worthington-Cox) lives with her mother Elen (Maxine Peak) and little sister Mari (Jodie Innes) on their small farm, as they try to keep themselves afloat while the father is conscripted to war. But this is the industrial revolution, and rich men want to convert the countryside into quarries and mines. So when one thing after another starts to go wrong, who is to blame? Are the rotten potatoes, slaughter of the sheep herd, Elen's sudden illness, due to bad luck, the practice of witchcraft, or something perhaps more covert and ominous?

Between Adam Etherington's gorgeous cinematography that does not hide the bleakness, and Anna Bertmark's sound design which emphasizes the natural sounds of the area. Gwen's world is both enormous and tiny: she lives in theses space between the craggy mountains and the farms, childhood and adulthood, the natural and the unnatural. It might be a difficult and somewhat meager life in terms of material wealth, but up until the beginning of the story, her family had each other and great love, which was enough to sustain them. Now, with an absent father, the world is crashing down on them, with Gwen as our witness to the proverbial and literal slaughter.

McGregor gives the story the overtone of a folk tale: these are people who have lived for so long under the thumb of the English invaders, yet worked hard to maintain their beliefs, a mix of the celtic and the christian. Superstitions and ignorance abound, but as we see, it comes not so much from the Welsh, but from their invaders, who care nothing for them except what they can take. Hope is a luxury the family cannot afford, and even as Elen's love for her children turns to anger at her inability to protect them, Gwen must become the adult far sooner than she should be. But the eveil forces around them no longer care for her well-being.

Worthington-Cox gives a stellar performance, a perfect stand-in for the audience to try and understand this world. She is naturally curious, and a smart detective: she will not accept that her neighbours died from cholera as the doctor says, and quickly grows (rightly) suspicious of anyone who claims empathy, knowing it can disguise deceipt. As one travesty after another befalls her family (her mother grows ill and begins behaving strangely in the middle of the night, the horse is injured and has to be put down), how much is just bad luck, and how much might be the god(s) punishing her for something over which she has no control?

Gwen does not present a pretty picture, even in the wild beauty of Wales; but it is a startling debut, with economical direction and a tight script that belies the depths of its characters and themes. Even though it's set in an earlier time, there are plenty of parallels to today on how cultures marry the old ways with new invaders, and how those invaders crush anyone who stands in their way.

Gwen screens in select cinemas in ther USA, on VOD and DVD via RLJE and Shudder, from Friday August 16th.