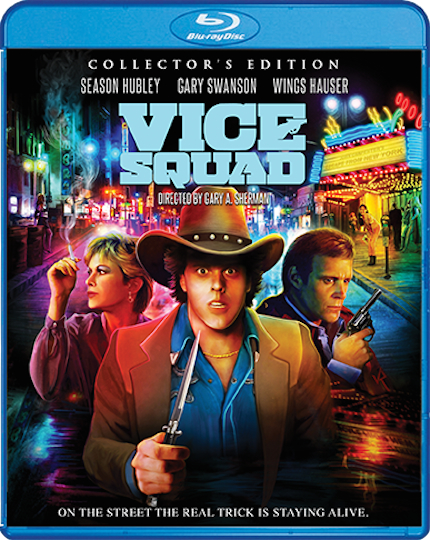 Out on August 13 in North America from Scream Factory comes Gary Sherman's (Death Line, Dead & Buried) 1982 film Vice Squad. Filmed on the streets of Los Angeles, Sherman directs Season Hubley (Escape From New York, John Carpenter's TV movie Elvis) as Princess, a prostitute who wants a better life for herself and her daughter.

However, there's a sicko on the loose (like any day or night in L.A.), and Gary Swanson (Quantum Leap, Logan's Run), plays Tom Walsh, a cop that wants to nab Ramrod (Wings Hauser; The Insider, The Young and the Restless), a vicious pimp, for his crimes against women. Walsh ropes in Princess as bait, and we're off to the races.

Of course, there are twists and turns, and perversions of justice, so Ramrod's released from police custody and then begins an all-out, balls-to-the-wall hunt on both sides. As Ramrod hunts down Princess, so does Walsh and the LAPD hunt down this rabid dog of a man, culminating in a manic chase all over the metropolis.

For the most part, Vice Squad looks great with this new 4k scan from the film's negative. There are only a few night scenes in low light that are very grainy --- but hey, the movie was shot on actual film in the early '80s, so no big deal there.

And now, let's get to the numerous special features on this Blu-ray! As you can see, Scream Factory did NOT skimp. There are several lengthy interviews to watch, such as a sit-down with Sherman, a well as with producer Brian Frankish (Field of Dreams, Righteous Kill). Both are fascinating; we learn that Sherman was a session musician with the legendary Chess Records, as well as an activist in the Civil Rights Movement, in addition to several other interesting tidbits.

Another cool featurette to watch is the film location comparision to current day L.A. locales. Old trailers and TV spots are always fun, too.

Like crazy movies or a fan of the underbelly of society? Vice Squad may scratch both of those itches; either way, it's a lot of fun. If you'd like to see a trailer or order the Blu-ray, head over to Scream Factory's Vice Squad page here